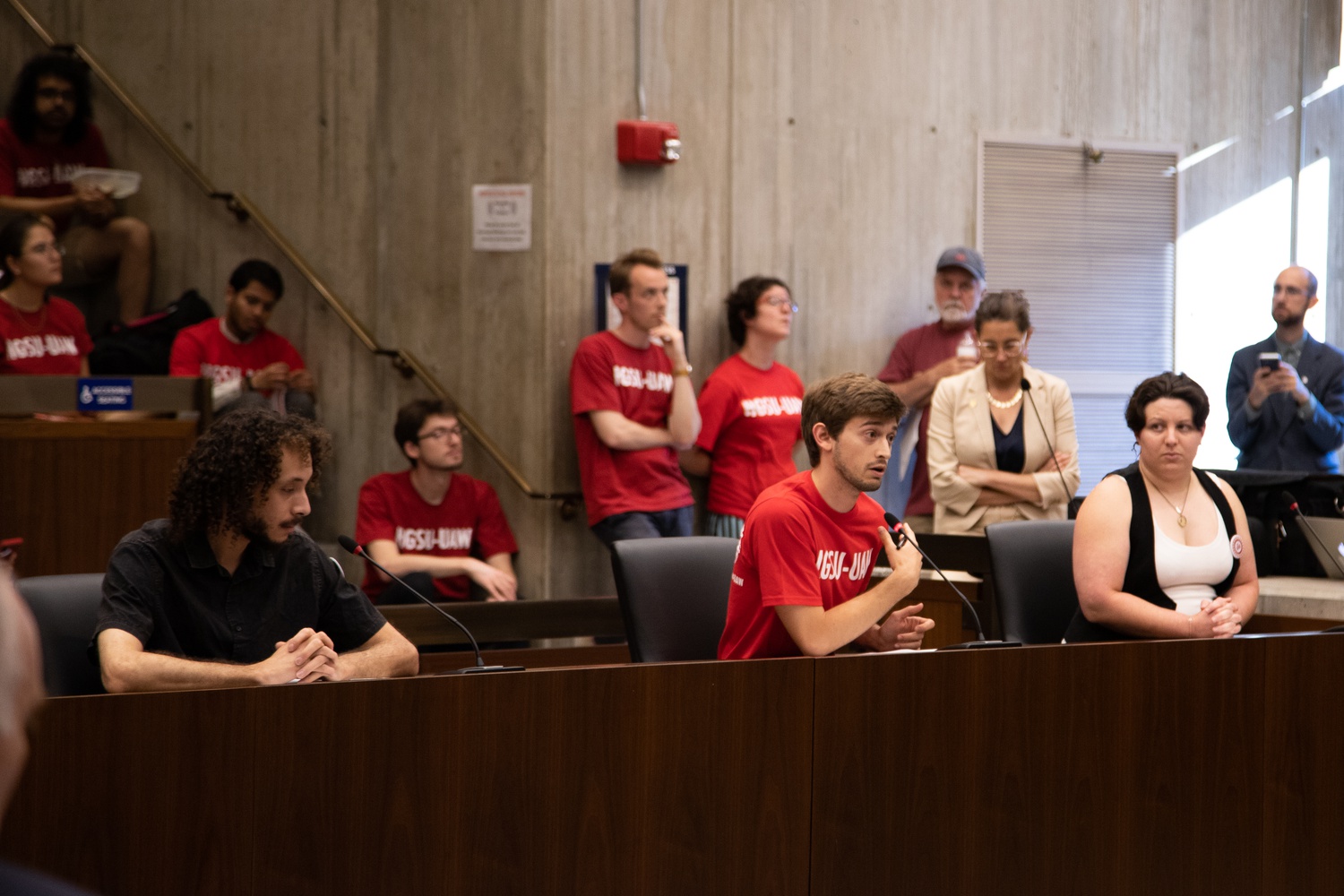 Boston City Council hosted a hearing Thursday night for members of local graduate student workers — including members of Harvard’s graduate student union — to discuss their efforts to gain recognition and negotiate contracts at their respective schools.

Boston City Councilor Lydia Edwards, who spoke to HGSU organizers in 2015 during their campaign for recognition, sponsored the hearing.

“All workers deserve protections on the job, and it’s incumbent upon institutions of higher education to realize their broader mission by ensuring economic dignity at work,” Edwards wrote in an emailed statement ahead of the hearing.

Harvard spokesperson Jonathan L. Swain noted in an emailed statement that Harvard is currently the only university of those represented Thursday evening to recognize and actively negotiate with its student union.

None of the four schools with students participating in the hearing sent administration representatives, instead opting to send letters to the Boston City Council. In its letter, Harvard described its negotiations with HGSU-AUW as “robust,” though it reiterated that all negotiation procedures are conducted in private.

During the hearing, Edwards said it was “unfortunate” that none of the institutions sent representatives. She added that the council might be obliged to use its “subpoena power” in the future to facilitate face-to-face conversations.

“We do have the ability to subpoena representatives from the universities to come here — and also written documents,” Edwards said after the hearing.

Boston College and Northeastern University did not respond to a request for comment. Boston University spokesperson Rachel Lapal referred to the letter the school sent to the council Thursday.

“Although we are unable to join you in person today, we are pleased to provide this written testimony about what we at Boston University are doing to support our PhD students throughout their educational and professional experiences,” the letter reads. “We believe that our PhD students are first and foremost students, whose teaching and research activities are integrally related to their scholarly and professional development.”

Some students said they were displeased that their respective universities chose not to participate in the hearing.

“It's very disappointing that the Harvard administration has not sent a representative,” said Cherrie N. Buckor, a Harvard Ph.D. student in sociology. “I was hoping that they would come and speak to the public about their stance and why they refused to grant these rights to these rights and protections that we're asking for.”

Others offered testimony on a range of issues including childcare, healthcare, mental health, wages, and recourse for discrimination, harassment, and bullying.

Alex A. Ahmed, a Ph.D. student at Northeastern University, specifically spoke about the student workers’ efforts to gain university recognition on her campus. She described Northeastern’s refusal to recognize a student-worker union as “irresponsible” and “disrespectful.”

“It's infuriating, and honestly makes me ashamed to be a student at Northeastern,” Ahmed said. “But at this point, I'm so close to graduating, and I'm proud of what I've done so far that I want to see it through. But honestly, it's shameful.”

Carleigh A. Beriont, a Harvard Ph.D. student in the study of religion, said during her testimony that Harvard failed to support her this past year as she sought childcare for her infant daughter. She added that policies designed to reduce childcare burdens for faculty could be made available to graduate students.

“The lack of institutional support for student-worker parents has a disproportionate impact on women and student-workers without access to outside wealth,” Beriont said.

“In addition to the coverage the majority of HGSU-UAW members already receive, at no cost, under Harvard’s student health insurance plan, the University has proposed the creation of funds totaling more than half a million dollars to assist bargaining unit members in covering the cost of dental and dependent care coverage, as well as child care,” Swain wrote in an email.

HGSU has proposed that Harvard institute third-party greivance procedures for racial disimination and sexual harassment in instances where it finds Harvard’s response unsatisfactory or delayed. The union has argued that because current Title IX procedures — the processes by which Harvard enforces the federal anti-discrimination law — are handled within the University, they lack objectivity.

In response to the union’s call for third-party arbitration, Swain again referred back to previous comments.

“The University is concerned that HGSU-UAW’s proposed approach would create a separate set of processes for union members compared to all other students,” he wrote. “Additionally, the University would point out that an independent arbitrator would have no legal power to issue sanctions or any form of punishment on an offending faculty, student or employee.”

“Harvard remains committed to continuing to strengthen its resources devoted to addressing and preventing harassment and discrimination, and ensuring the safety and wellbeing of all members of the Harvard community,” Swain added.

After the hearing, Edwards said she found the students’ demands “reasonable” and “fair.”

“We're not talking about making six figure salaries, we're talking about people who literally said, ‘I have no place to go if I'm sexually harassed. Allow for me to truly believe that that process is neutral, and that I have a fighting chance to defend myself,’” she said.

Harvard and HGSU have continued their negotiations — which began in October 2018 — throughout the summer, but have yet to agree on a number of contract elements.