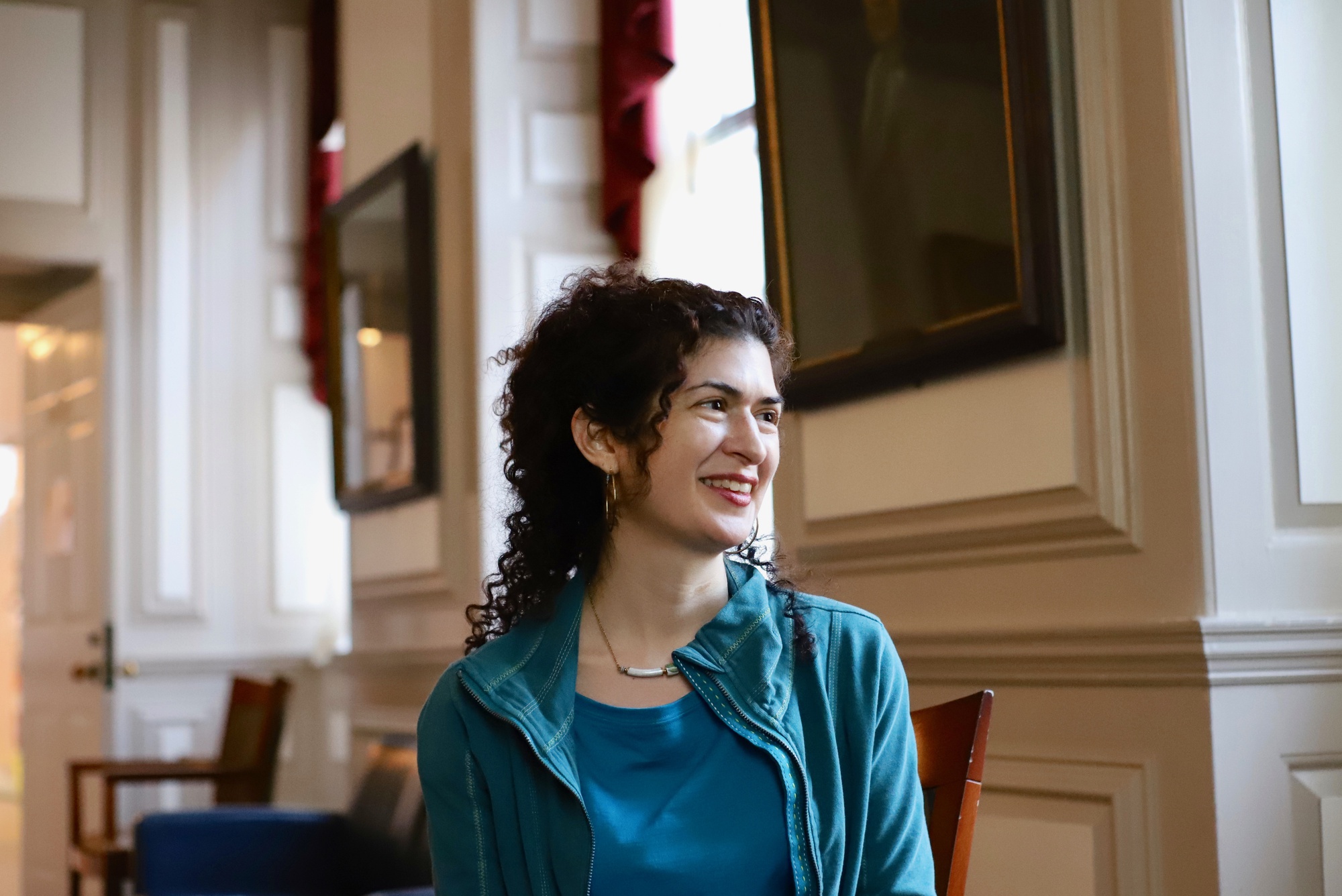 Yiddish belongs to many, exists all over, and yet, as Feldman notes, “Students can’t go study abroad in a Yiddish land.” It is now considered a language of migration and marginality.
By Olivia G. Oldham

The Alaskan village where Wilfried J.K. Zibell ’21 grew up is called Noorvik. It sits above the Arctic Circle and is populated by fewer than one thousand inhabitants, the majority of whom are Iñupiaq, the indigenous group of the region. Noorvik is also one of the reasons that Zibell decided to learn Yiddish at Harvard.

“Coming from a village that is 98 percent native Alaskan back at home, I think the way that Yiddish has been approached from a linguistic-preservation standpoint is interesting,” Zibell explains.

“I came in as a Government concentrator, and now I’m in Comp Lit.” They laugh. “So, uh, character development!”

At Harvard, Yiddish offerings are small but comprehensive: The language’s sole preceptor is Sara Feldman, a recent arrival to the faculty, who teaches language courses as well as a Yiddish cinema class. Feldman inherited her role from a lineage of preceptors first established in 1993, with the arrival of Professor Emerita Ruth R. Wisse. Wisse was the first person to hold the title of Martin Peretz Professor of Yiddish Literature and Comparative Literature, and was a deeply influential figurehead in the development of Yiddish studies at Harvard.

Zibell began their Yiddish education with Sara Feldman’s class, Yiddish AA: Elementary Yiddish I, and Professor Saul Noam Zaritt’s clsas, Yiddish 107: The Politics of Yiddish. Zaritt holds an assistant professorship in Yiddish literature and is one of the founding editors of In geveb, a digital journal of Yiddish studies. Though he is on sabbatical this year, he can typically be found nested in his office in the Dana Palmer building, working in the dark.

But the presence of Yiddish at Harvard predates Zibell, Feldman, Zaritt, and even Wisse by a century. In 1896, Leo Wiener was hired by Harvard to teach Russian, Polish, and Old Church Slavonic, and with his appointment, the Department of Slavic Languages and Literatures was born. Wiener, a Russian-Jewish polyglot and translator of Tolstoy, published the first English language history of Yiddish literature in 1899. He also collected books in Yiddish during his travels across Eastern Europe, constituting a major component of Harvard’s expansive collection of rare 19th century Yiddish literature. Today, his collection sits on the sixth floor of the Widener stacks.

Yiddish belongs to many, exists all over, and yet, as Feldman notes, “Students can’t go study abroad in a Yiddish land.” It is now considered a language of migration and marginality. Its origin is often traced back to Ashkenazi Jews in the ninth century, but it is now spoken throughout Europe and the Americas, by Ashkenazim and non-Jews, in Hasidic communities and secular counterculture. Linguistically, the language is Germanic and is written in a Hebrew alphabet, though it also contains Aramaic and elements of Slavic languages. Still, Zaritt explains that Yiddish “has a deep and troubled, or interesting and challenging, relationship with German, with Slavic languages, with its various territories, both in Eastern Europe and in its diasporas.”

In the past two decades, the way the language is taught and practiced at Harvard has changed significantly. Nationally, a vast percentage of students of Yiddish are queer-identifying and are drawn to the language for its contemporary queer culture. Zibell was also drawn to Yiddish for this reason. In Zibell’s past study of language, the question of gender-neutral pronouns was dismissed: If the language did not accommodate non-binary genders, there was little a single student could do. But, Zibell says, “with Yiddish there’s this feeling of being on the forefront of something new, almost ironically I guess.” The challenge of incorporating gender-neutral pronouns is embraced, not shied away from.

Many students are also drawn to the legacy of Yiddish in socialism. The General Jewish Labor Bund, a famed socialist party in late-19th century Russia, advocated for the use of Yiddish as a Jewish national language, and many of their songs are written in Yiddish. The political roots of Yiddish are far-reaching, from queerness to socialism — and they even find a home in contemporary heavy metal.
The jump from Government to Comparative Literature might seem stark, but Zibell, who has bleached hair and a soft Alaskan accent, reframes their relationship. “Gov is not the only way to study political reality, and maybe not the best way to study political reality at Harvard,” they explain. “The humanities can be political and should be political.”