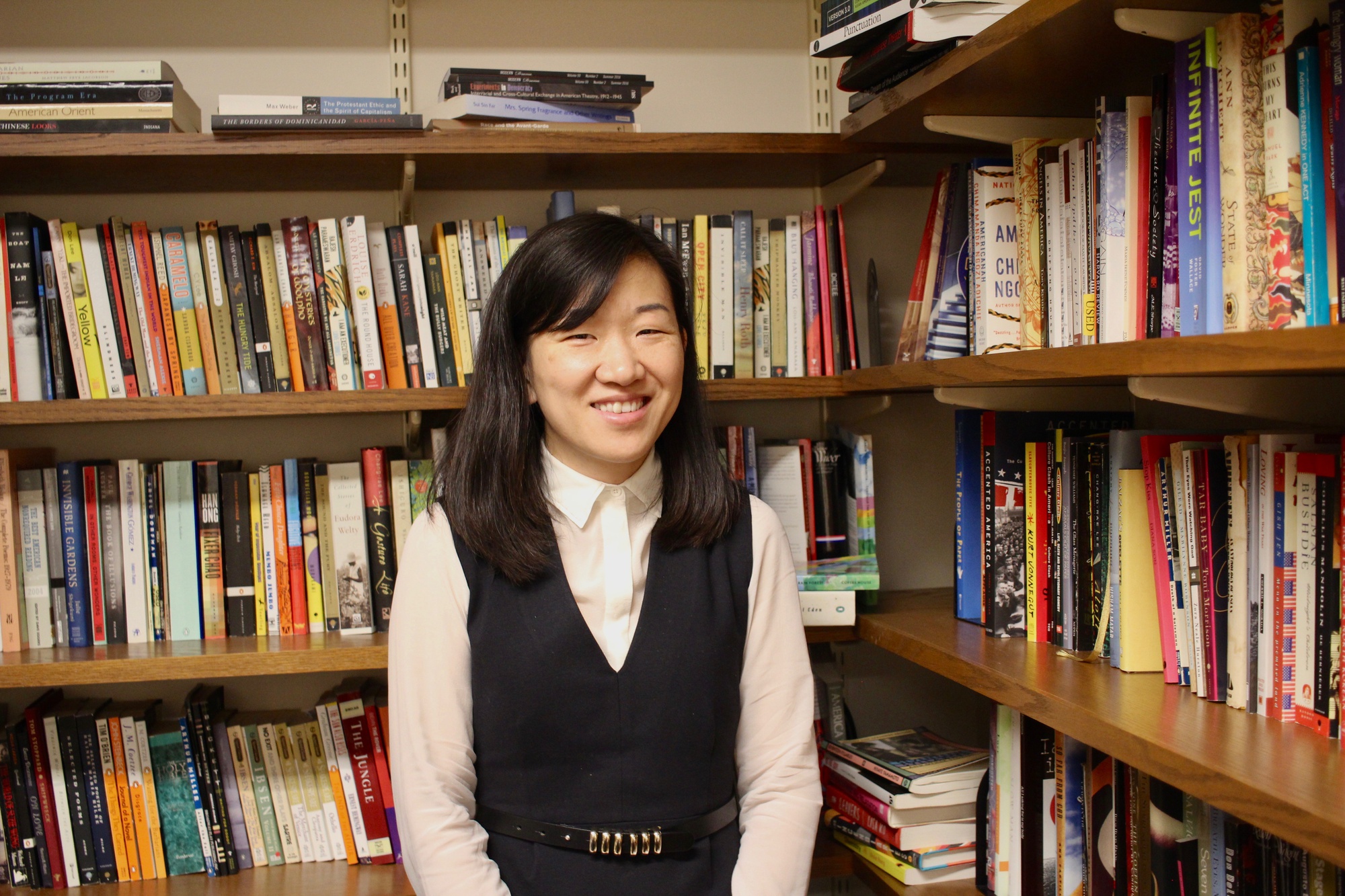 Ju Yon Kim will be the only tenure-track professor specializing in Asian American Studies next fall.
Advertisement
Advertisement

Ju Yon Kim is Building from the Inside

When Kim took her job at Harvard in 2011, she didn't know she would be the only tenure-track Asian American Studies faculty member. "I was very surprised when I came to campus."
By Nina H. Pasquini

When Ju Yon Kim first got to college, she thought she wanted to study Shakespeare and write her senior essay on Virginia Woolf.

That changed when, during her sophomore and junior years at Yale, she began taking classes on Asian American and feminist literature.

“It was really at that point I started thinking seriously about being an academic, because I saw that there were ways to study literature that could connect up also to some of my interest in social issues,” she says. “It seemed like this wonderful combination of intellectual inquiry with a commitment also to social inquiry.”

That’s not to say that Kim — who will be the only tenure-track professor specializing in Asian American Studies following the departure of Genevieve A. Clutario next fall — thinks that Shakespeare and Woolf scholars cannot engage with social issues. But she says that these societal questions took on a new immediacy for her in light of feminist and Asian American studies.

“Unfortunately, at that time — and it's still actually an ongoing struggle, which you can read about it in the newspaper,” she adds, laughing, “but, Yale’s ethnic studies offerings were pretty limited.” During her time as an undergraduate, she joined a student group that advocated for more robust ethnic studies offerings — one that she says is similar to the Harvard Task Force on Asian and Pacific American Studies, which currently does comparable advocacy work — where she “learned how academic institutions worked, what it meant to be faculty.” And thus began her interest in a career in academia.

Today, as an associate professor in the humanities, Kim does not do the same sort of “banging on doors” activism she did as a student. But she does think that she participates in a different type of advocacy today. “A lot of people don't know what ethnic studies is, and you’re kind of having to represent it,” she says of her position at the University.

Obviously, she continues to remind the University that “we need more support, staff, and resources.” But she also sees “her everyday interactions” as representative of the field of ethnic studies. “I think ethnic studies is still attacked from various corners,” Kim says. “And so I think I feel a particular kind of responsibility to represent it in a very careful way, because it’s such a sensitive moment in the university.”

Her activism is in her demeanor in the classroom, the syllabi she creates, the discussions she has about the humanities and English literature in general. It is in the interview she is doing for this article right now.

Kim was born in Seoul and moved to California as a child. After she received her A.B. from Yale in 2002, she spent a year working for an Asian American women’s publication called Audrey Magazine. She had been contemplating graduate school since her time as an undergraduate, when a professor encouraged her to consider Stanford’s interdisciplinary Modern Thought and Literature program. After a year at Audrey, she entered this program at Stanford.

Kim says that Stanford and other schools in California have embedded ethnic studies as part of their curricula for much longer than schools on the East Coast. During her time at Stanford, she was involved in the Center for Comparative Studies in Race and Ethnicity, where there were many other faculty members who were interested in the same sorts of questions that she was pursuing.

“And so I was able to bring together a committee of people who worked in Asian American Studies, Latinx studies, African American Studies, and develop that knowledge of ethnic studies that was really only sort of half formed in undergrad, where I really had to do a lot of things independently,” she says.

Kim muses about whether there is any connection between her interests in ethnic studies and theatrical performance. After a moment, she decides that there is. “It’s probably, in some ways, it’s very implicit in my mind,” she says. Performance is good at “answering certain questions about things like race, about self presentation about the complexities of identification,” because “it’s live, it’s embodied, it’s about immediate social interaction.”

For her dissertation, which eventually became her first book, Kim researched how habits and routines — things like making eye contact, handing change back — became sites of racial conflict during moments in American history like the 1992 L.A. riots. She was particularly interested in how theatrical performances dealt with these embodied actions and their implications.

After she finished grad school, Kim spent a quarter as a lecturer at the University of California at Santa Barbara. At UC Santa Barbara, there is an Asian American Studies department. Because Kim was one of many faculty offering classes in the field of ethnic studies, she was able to tailor her courses to more specialized topics.

After her time at Santa Barbara, Kim was offered a job in Harvard’s English Department. So she packed her bags and moved back across the country to the East Coast.

When Kim took her job at Harvard in 2011, she didn’t know she would be the only tenure-track Asian American Studies faculty member. “I was very surprised when I came to campus,” she says.

She began teaching her course English 181a: “Introduction to Asian American Literature” in her first year, and has offered it every year since then that she has not been on sabbatical. There were seven enrollees during its first year, including an auditor; last semester, there were more than 70. Kim notes that before she taught the class, similar courses had been offered by visiting faculty — but she believes it was her permanent position at the University that allowed it to become as popular as it is.

“I could always sort of rely on Professor Clutario’s class to cover more of the history, for example, because she always teaches an Asian American history class. I do some of that in Asian American Literature, but I think that I might pick up a little bit more of that,” Kim says. “I think that both the class and, in some way, I will be asked to be more representative, in that I won't have a colleague to participate in that with me.”

Clutario also says that the two approaches to Asian American Studies that she and Kim offered allowed students to pick what felt most relevant to them.

Kim describes “studies” as an interdisciplinary field: It can be approached from different perspectives, based in the humanities or the social sciences or anything in between. When there is not an ethnic studies department, however, ethnic studies classes must be tailored to fit into existing departments.

In addition to the flexibility that a department would allow, there are also more concrete benefits of resources and influence.

“If there’s a sense that you are having to constantly explain the work that you do, if you constantly feel that there are misconceptions about your approach, then it gets really hard to believe that you have a future at this place.”

“Over the time [Kim has] been here, she has established Asian American literature as a significant field in the department and on campus generally,” says Nicholas J. Watson, chair of Harvard’s English department. “She’s not quite the only person who's done that, but she’s the main person who’s done that.”

Kang Wook Lee ’20 took Asian American Literature last semester and is currently enrolled in another of Kim’s classes. He appreciated her inclusion of diverse voices in the syllabus, which he says is especially important considering the fact that East Asian voices have often been privileged in the history of Asian American literature.

In terms of her teaching style, Kim has grappled with how her identity interacts with her students’ notions of her.

“I’m not interested in fighting stereotypes by performing the opposite,” she says. “I know what my tendencies are, just as a person and as a teacher. How can I make those productive, despite stereotypes that might exist? So if people just are going to assume that I’m nice and approachable because” — she laughs — “I’m a woman or something, instead of trying to perform authority, to seem more intimidating or something, how can I actually use that to enhance the learning experience?”

The students I spoke with all listed Kim’s warmth, approachability, and ability to elucidate complicated concepts as central to their perception of her.

“She’s very much a technician. We're only there for an hour and 15 minutes, but we cover a lot of material and the way she discusses it, you can tell every detail was thought of,” says Esteban A. Ortiz ’20, a student in her Migrations class this semester. “But she also knows everyone's name, and you’re always just be able to say hi and strike up a conversation. She’s a very friendly, very down-to-earth professor.”

Clutario adds that when she first came to Harvard, Kim was a valuable mentor to her as the only other tenure-track Asian American studies faculty on campus, and that throughout their time at Harvard, they “worked together to grow a curriculum around Asian American Studies.”

“She has been a really wonderful mentor, because — and I think she’s like this with her students too — she’s just really generous, and really ethical. And I think it’s because she really takes to heart the tenets of ethnic studies and tries to embody that in her scholarship and her teaching,” Clutario says. “I’m going to really miss working with her next year.”

I ask Kim whether it has been difficult to move so far so often — from Seoul to California, and back and forth from California to New England — and whether that had influenced her decision to eventually take a job at Harvard.

She laughs, joking that the academic job market is so tough that people don’t really factor choice into job offers.

But then she continues, “I guess you’re asking a question about the past that’s really about the future in a way.”

She speaks slowly, as if she is parsing each word.

“In terms of whether or not I miss specifically the kind of support for the field that there is on the West Coast — it’s hard because I want to believe that I'm here because we’re building ethnic studies and Asian American studies here.”

“And to the extent that I can believe that, I’m glad to be here, because it feels important,” she says. “If I really felt that rather than building, it was merely about maintaining a fairly limited set of opportunities for students who are interested in ethnic studies — I think if I felt that way or if it began to feel that way I would definitely, perhaps have a different sense of my future here.”