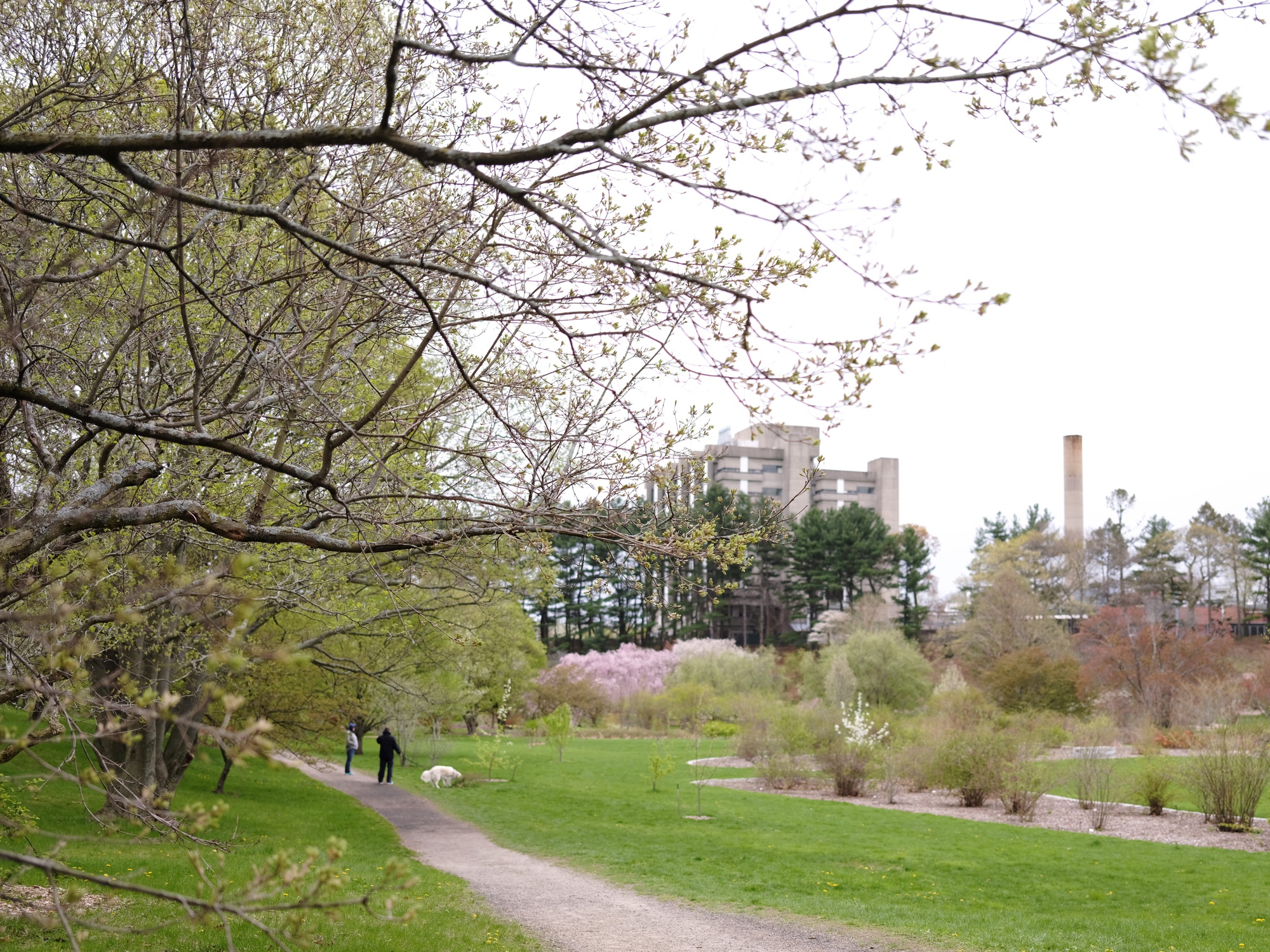 Walking by the ‘Woods’

Four million people live in this city. The global temperature has risen by an average of one degree Celsius since the 19th century. My feet are sore, and I wish that, for a moment, I could lean back on the bench overlooking the rose garden, close my eyes, and not be interrupted by the sporadic honking and sirens blaring from Route 203.
By Tyler T. Johnston

Harvard University’s Arnold Arboretum makes up a mere 281 acres of the 56,000-acre urban sprawl that is Boston. The lilacs in the Rosaceae collection look beautiful in April.

Four million people live in this city. The global temperature has risen by an average of one degree Celsius since the 19th century. My feet are sore, and I wish that, for a moment, I could lean back on the bench overlooking the rose garden, close my eyes, and not be interrupted by the sporadic honking and sirens blaring from Route 203.

My feet are sore because I’ve walked the entire boundary of the Arnold Arboretum. Perhaps I should have worn better shoes, or at least given myself a better view: I envy the joggers and dog-walkers and couples strolling the winding dirt paths inside the Arboretum itself. It’s less interesting on the perimeter; stretches of suburban housing and office developments mark the scenery on the opposite side of the road.

A brutalist rectangle structure overlooks the rose garden. It’s complete with a reinforced concrete chimney — the sort of towering grey cylinder you’d expect from a factory or steel plant. This is the Department of Public Health building, placed centrally between the Bussey Brook Meadow and South Street Community Garden. The grey monolith and its smoking chimney stick up through the trees, visible from anywhere along the eastern entrance. Other traces of the city are everywhere in the Arboretum, if you look close enough: cigarette butts stuffed into woodchip pathways or commercial airplanes from Boston Logan Airport passing overhead.

When the roads are quiet and the passersby are gone, however, the trees briefly regain a sort of stillness. Without the noise pollution of the city, the forest starts to feel natural again.

***
Maybe it’s disingenuous of me to posit the Arboretum as “natural” in the first place: many of the meticulously arranged florae are accompanied by small metal tags that say “Native to Western China” or “Cultivated Origin.” It’s easy to feel immersed in nature here — especially if you can avoid the asphalt paths and their accompanying loud Bostonians — but there is a strange artificiality to the design of the Arboretum: a space so carefully planned and cultivated that it leans toward becoming simply an imitation of nature itself, the foliage aligned and sorted like cardboard cutouts in a storefront display. 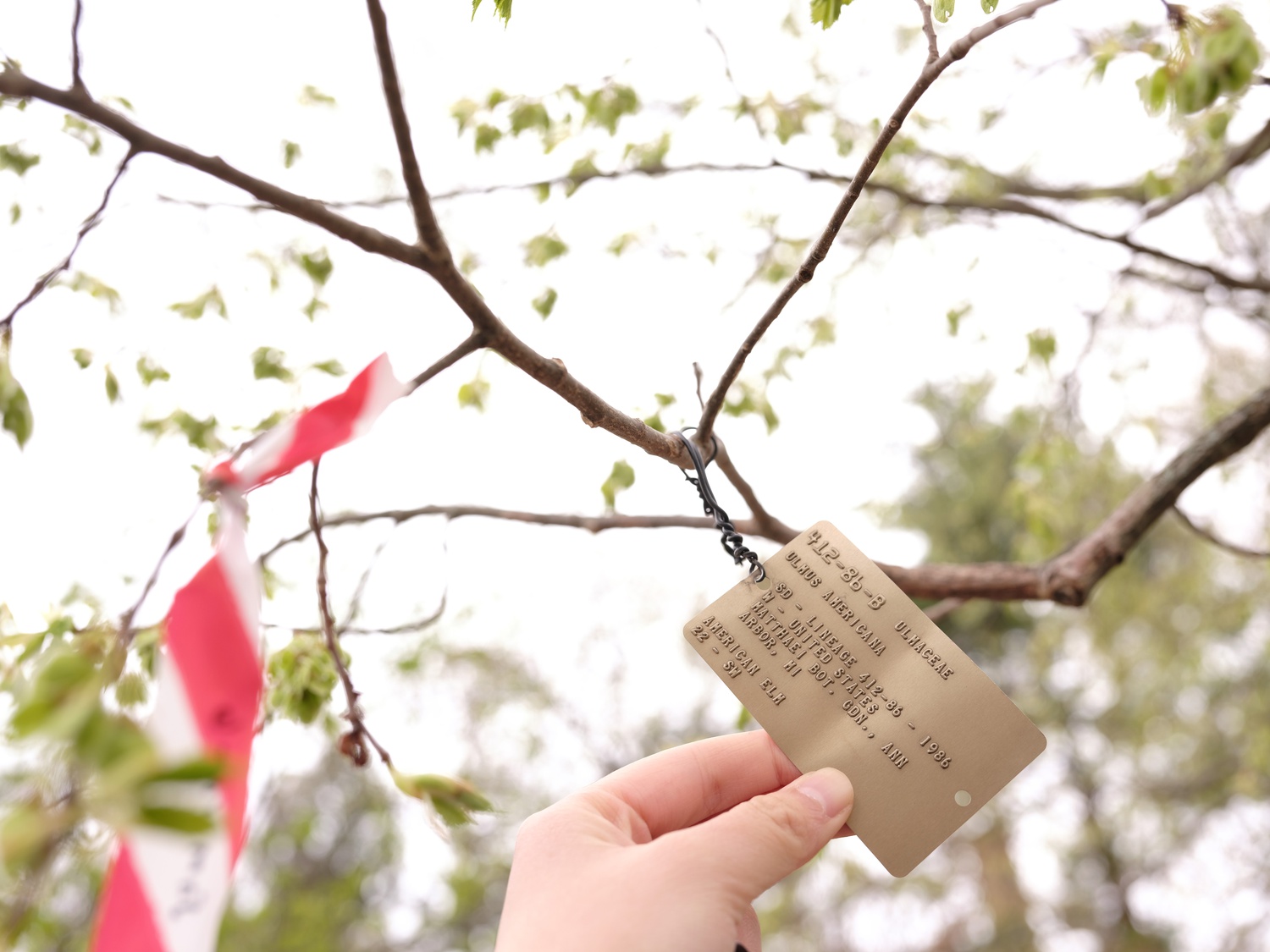 The Arnold Arboretum is made up of 281 acres of land. By Krystal K. Phu

However artificial the Arboretum is, looking at it through the crosshatch metal fence from the sidewalk along the perimeter at least provides the illusion of an unclaimed land, immune to the forces of urbanization that have taken over the rest of the eastern seaboard. Yet I know that only a few miles away, the Atlantic coast is eight inches higher than it was one hundred years ago. I know the air I’m breathing is filled with 41 percent more methane than 20 years before. I know the City of Boston has spread many times wider, landscaping and paving over the land that once was truly “natural.”

Whenever I refer to the latent source of my anxieties by name — climate change — my mind inevitably returns to a single image: the cliche photograph of a lone polar bear, stranded on a tiny floating iceberg, surrounded by vast stretches of open sea. As the ice melts, the water encroaches from all sides, shrinking the boundary of the floating ice. The bear is usually staring dismally at the photographer, or else pawing the water, as if watching its own reflection ripple across the tiny waves.

As I stand on the border of the concrete sidewalk and cultivated Kentucky Bluegrass near Peters Hill and look out onto South Street, the 281-acre arboretum itself begins to feel like a melting iceberg. The conservationist ideal that guides the Arnold Arboretum is admirable, but I can’t help but find the effort futile as I walk the asphalt sidewalks along the property line and hear the trucks and buses passing by. I know where the carbon emitted from their exhaust pipes will end up, and I can only imagine what that means for this small, shrinking sliver of nature that I have circumnavigated in a single morning.

— Magazine writer Tyler T. Johnston can be reached at tyler.johnston@thecrimson.com.