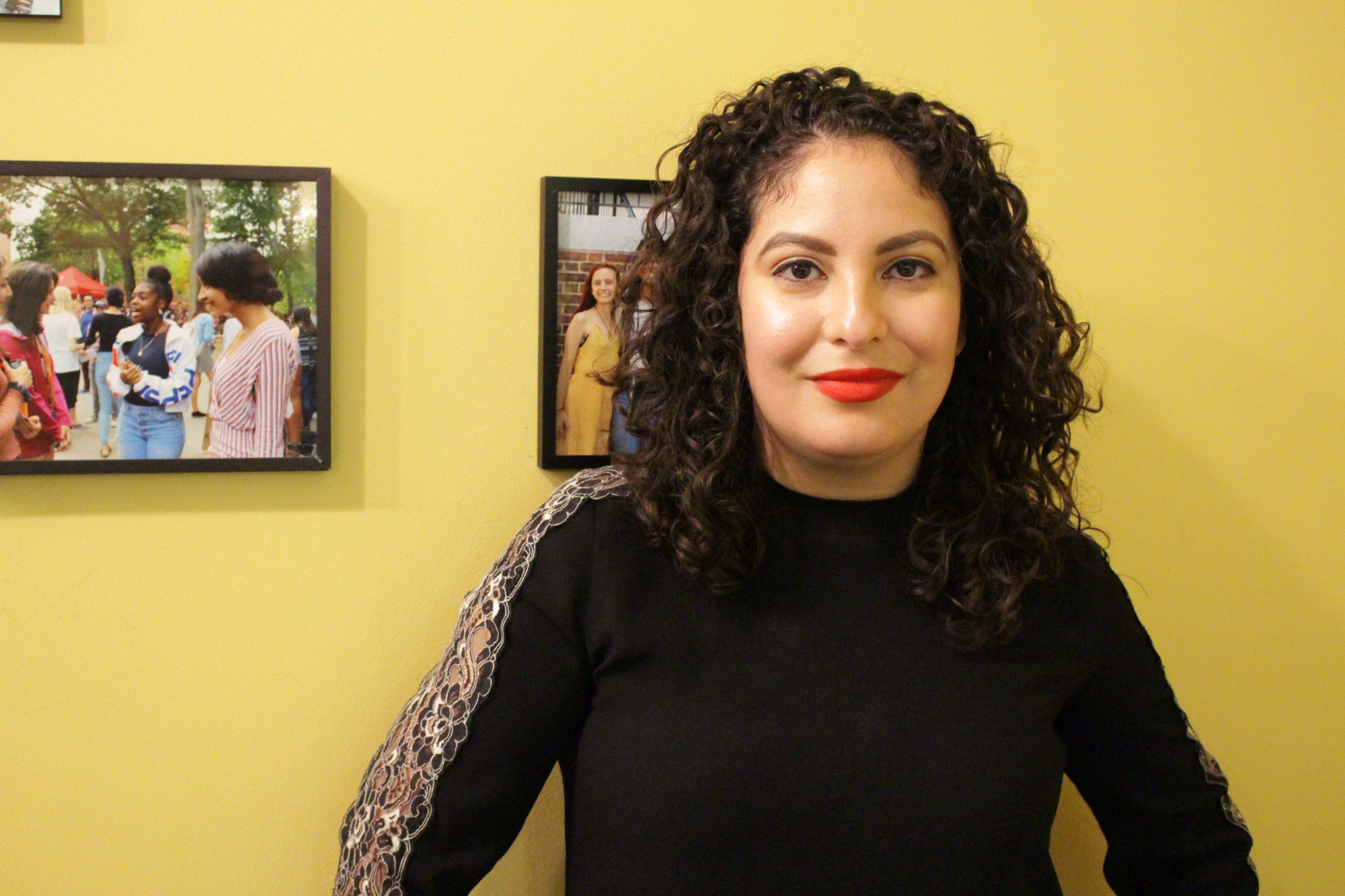 Andrea Flores was elected as the first Latinx president of Harvard’s Undergraduate Council in 2008.
Advertisement
Advertisement

When Andrea Flores was elected as the first Latinx president of the Harvard Undergraduate Council in 2008, her lipstick posed a problem.
By Olivia E. Gopnik-Parker and Elyse D. Pham

When Andrea R. Flores '10 was elected as the first Latinx president of the Harvard Undergraduate Council in 2008, her lipstick posed a problem.

During the election, spectators didn’t focus on her platform’s substance. Instead, Flores recalled, they seemed more concerned with her gender and race, asking her if she had a “Latina agenda” or drawing attention to her straightened hair and eyeliner.

Flores went on to serve a successful tenure as UC President: She founded a communications committee to make the UC more accessible to students, and, in an attempt to elevate student input, she collected and consolidated student responses to Harvard’s budget cuts in 2009.

At the age of 24, she got a job in the Obama White House as a policy assistant on immigration and rural affairs. However, Flores said, the same skepticism that shrouded her UC presidency continued to follow her.

On April 17, Flores recounted these experiences at an event hosted at the Women’s Center to promote an essay collection she contributed to, entitled “Yes She Can.”

The book holds the stories of 10 young women who worked in the government during Obama’s presidency. The essays provide inspiration for the next generation of women seeking to enter public service. At the event, Flores was joined by Jenna Brayton and Eleanor Celeste, two of her co-authors and fellow Obama White House staffers. 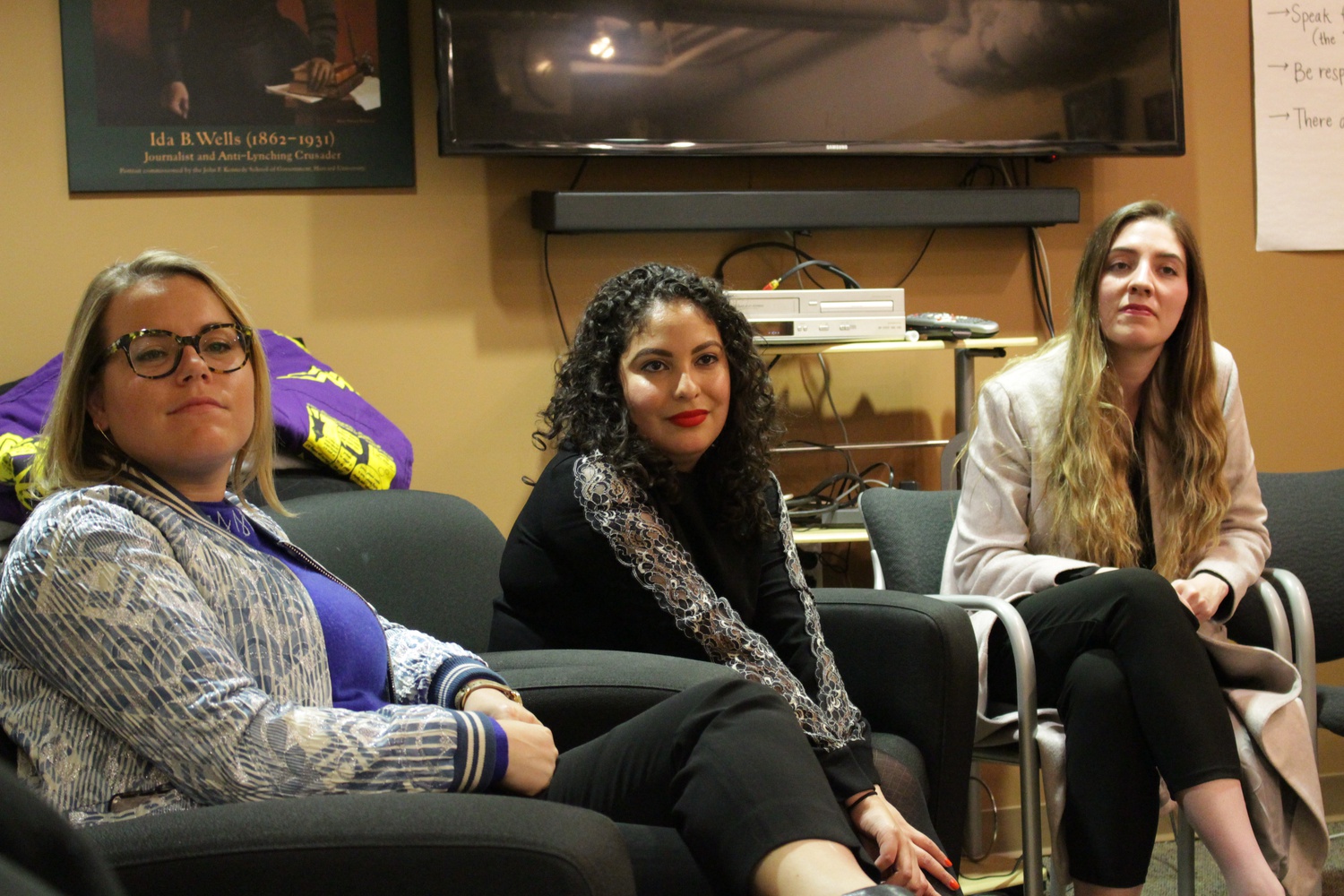 Flores recounted her such experiences in an event hosted at the Women’s Center on April 17th. By Ryan N. Gajarawala

The three women shared a variety of anecdotes and advice with the audience, ranging from serious suggestions for embarking on a political career to Celeste’s wry recollection of, post-2016 election, sharing a bottle of gin with her fellow science policy analysts at their White House desks. The unifying sentiment was clear: The White House and political realm writ-large are spaces for young women to occupy, despite the seemingly insurmountable barriers to entry and especially in the current political moment.

Flores began by discussing how her experience as UC president influenced her professional career. Since her tenure, a more inclusive, civically-engaged culture has evolved on Harvard’s campus. Although Flores left her government job two years ago for the private sector, she emphasized the importance of energizing young people to participate in politics.

After Flores’s opening remarks, one audience member asked about taking the leap of faith to pursue public service and mentioned the tradeoff between monetary gain and personal fulfillment. In response, Brayton emphasized that public service and the private sector are not mutually exclusive — in fact, she argued, the skills gained in one are easily transferable to the other.

Another audience member wanted to know about entering politics in a post-2016-election era when many people seem disillusioned with Washington. Flores answered by recounting the moments in her career when she felt the tangible, positive impact of the work she was doing.

At one point, an audience member expressed uncertainty about discerning the fine line between standing up for yourself in the workplace and jeopardizing your career. Flores passionately recounted a recent experience: a colleague at her current law firm commented on her signature red lipstick.

To this, she replied that she wears it because she “rocks it.” She explained that this quick-witted quip was one way to handle harassment privately. But, she also detailed instances in which she felt that formal measures were necessary — namely, when a male co-worker accused her of being an affirmative action hire. She filed an HR report at the firm.

After the event, FM had a chance to speak with Flores.

When asked about the culture of the Obama White House, Flores noted prejudiced misconceptions within the self-proclaimed progressive administration.

“I think sometimes there is an assumption that… all the Latinos worked on immigration and black people worked on civil rights,” she said.

However, she expressed optimism at the prospect of the “next Democratic White House, when you can make even more strides.” With greater diversity, Flores believed “there won’t be assumptions that the Latinos will now go to the immigration team.” Instead, “Latinos can be doing gender issues, or national security advising,” she said.

When asked for her advice to young women looking to enter politics, Flores emphasized the importance of not letting a sense of pride dictate career decisions. “You don’t know what the smallest job will get you,” she said. “Don’t be afraid to go back home, go to your state government.” Flores joked about her application of this humility principle, claiming that she tends to work on campaigns that lose.

After a few “self-care” years in the private sector, she says she plans to re-enter the political realm.