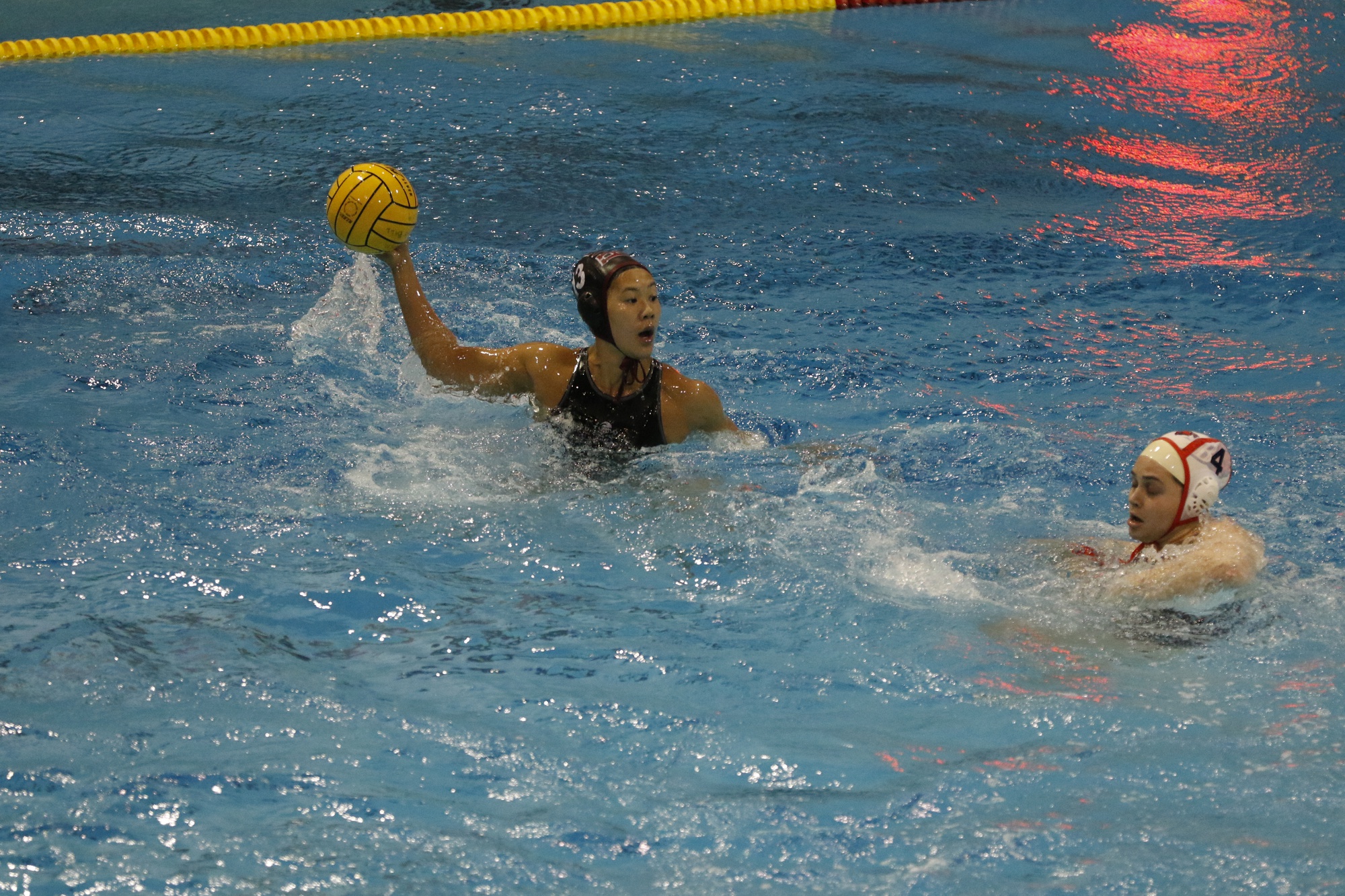 On Saturday, senior attacker Kristen Hong tallied eight goals, enough to put her over the school’s career goal record. The previous record was held by Yoshi Anderson with 248. By the end of the day, Hong had tallied 254. By Timothy R. O'Meara
By David Manikas, Crimson Staff Writer

Returning from a week of travel in the West Coast featuring in which the No. 14 Crimson women’s water polo team took on several nationally ranked opponents, Harvard found itself back on the East Coast this weekend. Traveling to Washington, D.C., the Crimson sought to look past last week’s loss to No. 2 ranked Stanford.

“We knew that it was going to be a tough game,” said senior attacker Kristen Hong, reflecting on the matchup against Stanford, who currently have a record of 15-1 and knocked off No. 1 USC this weekend. “But, we were going into it thinking about the lessons that we could take away and bring back to the East Coast to help win an East Coast championship.”

The Crimson bounced back strong, taking all three matches in the weekend slate.

Starting with Saturday morning’s match against St. Francis, Harvard dominated its opponents offensively. The Crimson started the game out hot, responding to a St. Francis goal with seven of its own. Possessing a comfortable five-goal leading heading into the second half, Harvard looked to extrapolate its commanding play into the final stretch.

And it did just that. The Crimson ended the day scoring 13 goals to the Red Flash’s six, with scoring contributions from eight different players.

However, the game was much more than another conference win for Hong. The squad’s leading scorer last year, tallying 71 goals in the 2018 campaign, Hong entered the weekend just shy of the program’s career-goals goals record held by her former teammate Yoshi Andersen, who scored 248 during her time with the Crimson. Recording a hat-trick against St. Francis put Hong ahead of Andersen and first in Harvard’s all-time goals list.

“I'm just very thankful to have such amazing teammates because without them it wouldn't be possible for me to come close to this,” Hong said. “It's about making the reads, getting each other open, and that type of teamwork helped me get here so I'm really thankful that I played with such amazing girls.”

Harvard claimed the first match of the weekend against St. Francis, 13-6.

Shortly after the first game, Harvard was set to face off against George Washington, the host of the weekend’s matches.

The offensive prowess continued to show for the Crimson in their second match-up, as Harvard jumped out to a lead of eight goals to one. During this half, Hong continued her scoring run, surpassing the 250 career-goal mark. Defensive stops in the third quarter prevented George Washington from closing the gap, as another impressive showing by freshman keeper Zoe Banks held the Colonials to four goals on the game. The Crimson ended the afternoon match with eighteen goals, comfortably outpacing George Washington’s 4 and advancing to the next day to face Bucknell.

“Having a strong freshman class, returning a lot of scoring threats, and being able to shoot from anywhere in the pool makes it really hard for other teams to guard,” Hong said.

The final game of the weekend featured a rematch against No. 24 Bucknell, where Harvard’s eight goals edged out the Bison’s six in the first meeting between the two squads at the Harvard Invite.

The rematch was another close one, as the Crimson’s offensive ability was challenged by Bucknell’s own hot start. The teams saw themselves with eight goals apiece entering the half. Although the close contest continued into the beginning of the third period, the Crimson broke out in a scoring run led by junior co-captain and attacker Sofia Carrera-Justiz, who ended the game with a season-high five goals, contributing three assists in the match as well. Clawing back late, Bucknell scored to bring the lead down to two goals. However, playing against the clock, the Bison’s 13 scores were not enough to top Harvard’s 15.

With the weekend sweep over conference opponents, the Crimson improved its record to 18-4 heading into the final stretch of games before the CWPA championship. Up next for Harvard is another weekend in Blodgett Pool, where seniors Haley Bowe, Hong, and co-captain Sam Acker will be honored in their last home games. The Crimson will be facing the same three conference opponents next weekend, hoping to extend their win-streak to six.

“I'm excited to have our senior game and face off against the same three teams as last weekend,” Hong said. “Everyone is getting ready for this championship tournament and we are looking really good so I'm excited to see how it all pans out after that.”

—Staff writer David Manikas can be reached at david.manikas@thecrimson.com