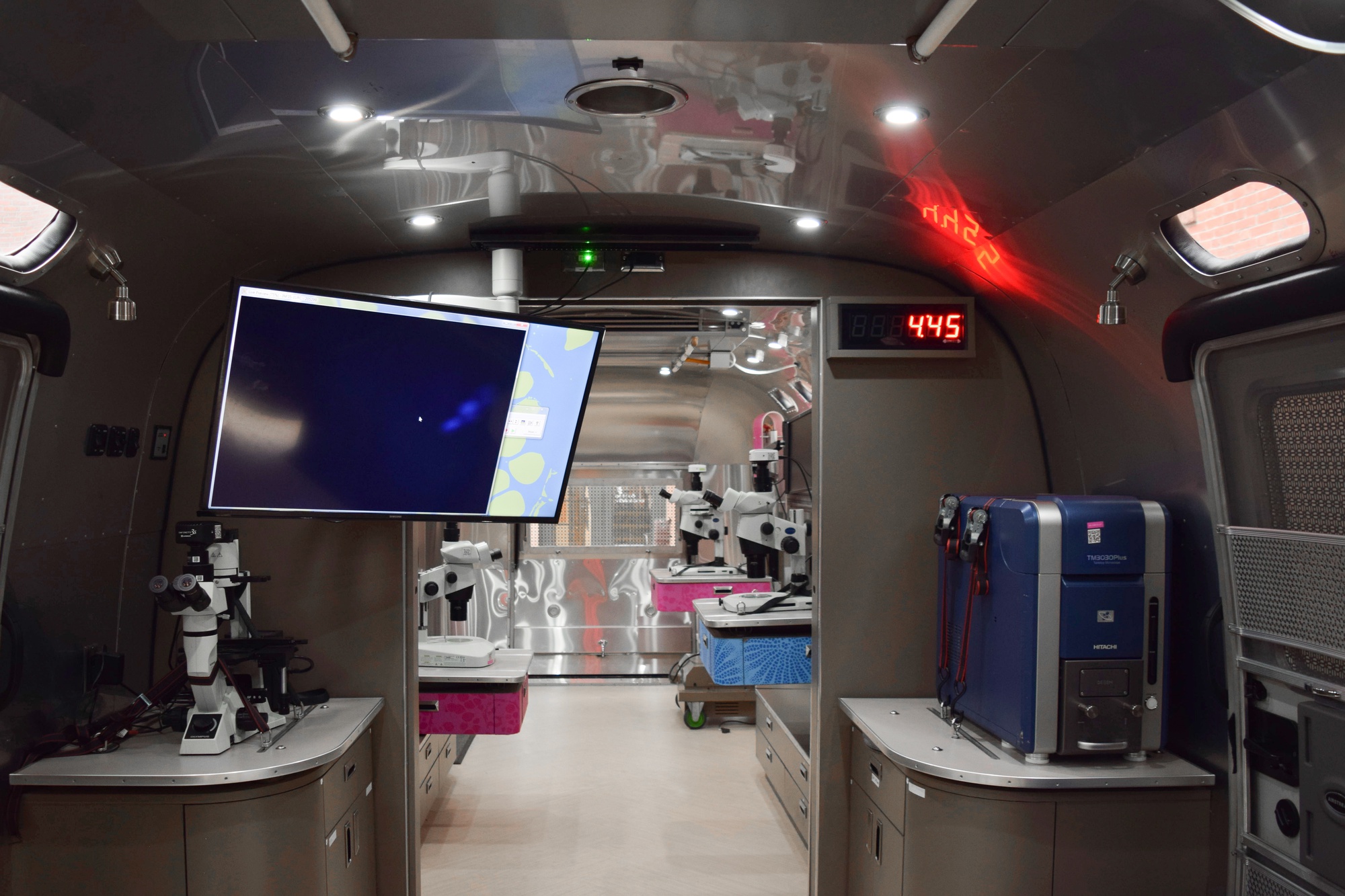 BioBus originated as an experiment to test Dubin-Thaler’s hypothesis that, given the opportunity to use research-microscopes to perform hands-on experiments, anyone would fall in love with science.
By Olivia E. Gopnik-Parker and Amanda Y. Su

On a Friday afternoon outside Pierce Hall, we find ourselves inside a silver, state-of-the-art airstream trailer examining microscopic plankton. Mollie Thurman, our tour guide for the day, is projecting the tiny organisms beneath the white microscope onto a flat screen TV perched at one corner of the high-tech trailer. She asks what we think the translucent blob bouncing on the screen could be. “Is it that thing that eats algae?” we respond, scrutinizing the squirming specimen. She gives an encouraging look, raising her eyebrows expectantly.

“It’s a type of plankton!” Thurman responds excitedly. It’s a Daphnia plankton, to be exact. She then proceeds to point out the organism’s eggs and rapidly beating heart.

Thurman is one of the lead scientists at BioBus, a mobile science laboratory that offers demonstrations like this one primarily at underserved schools across the United States. For the past week, BioBus has roamed Cambridge, visiting schools and participating in the annual Cambridge Science Festival, which runs from April 12 to April 21. 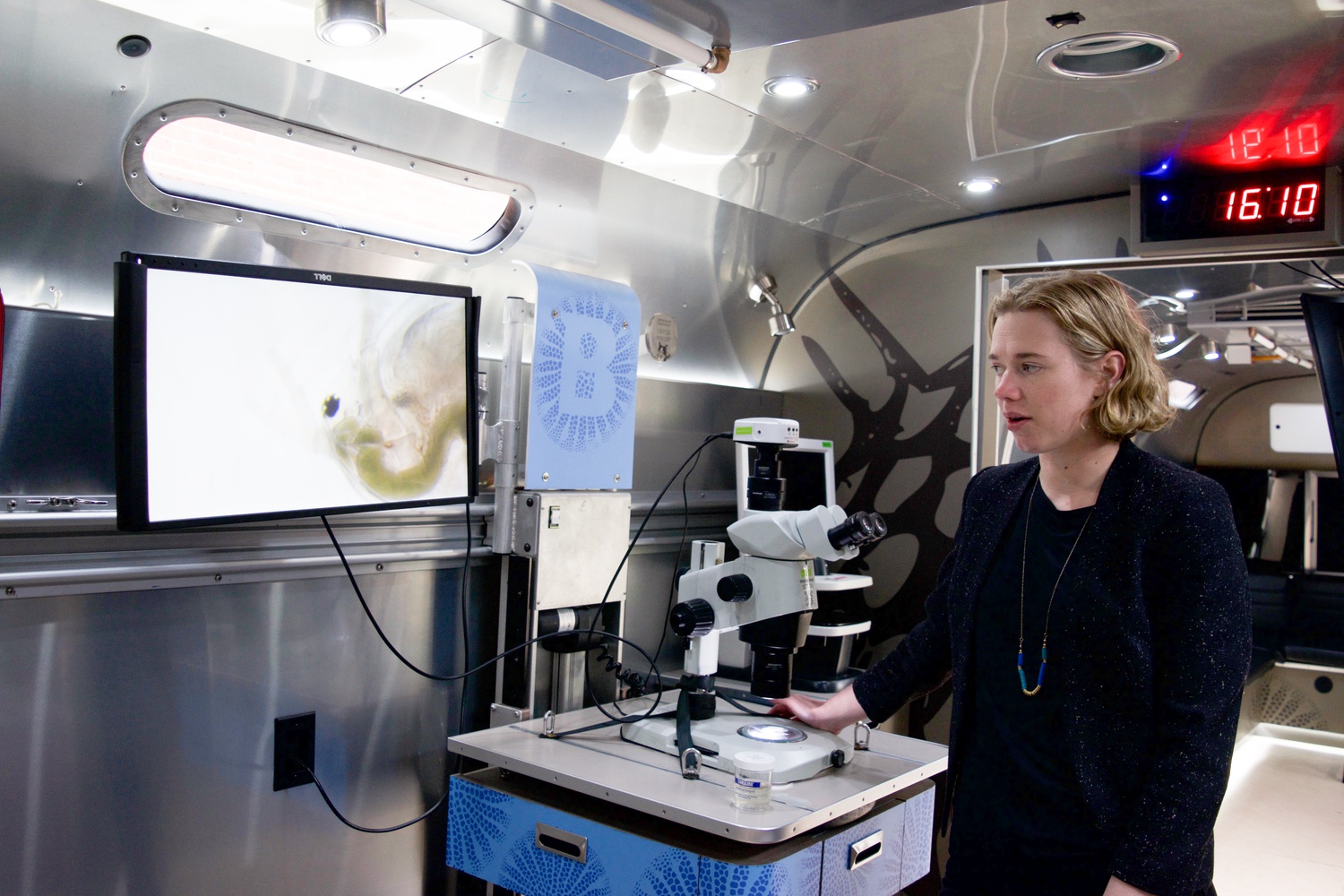 Mollie Thurman is one of the lead scientists at BioBus. By Amanda Y. Su

BioBus’s mission has long centered around uplifting communities that are underrepresented in the sciences, reaching out to minority, female, and low-income K-12 and college students to encourage them to pursue the scientific disciplines. Biobus has visited over 250,000 students at more than 500 schools since its founding in 2008, according to its website.

“It's an incredibly exciting time, and the tools and the resources that we have at our disposal as scientists are just unparalleled,” says Sarah J. Weisberg ’08, a chief scientist and executive vice president at BioBus. “But that world remains pretty hard to access for so many people, and that means that the impact of the discoveries are limited — it means that the ideas are less diverse than they could be, it means we have a less equal society.”

“Both knowledge and resources are concentrated in a smaller set of hands,” she says.“And it means that that joy and excitement is limited and distributed unfairly.”

Ben Dubin-Thaler founded BioBus in 2008 after completing his Ph.D. in Biology at Columbia University. BioBus originated as an experiment to test Dubin-Thaler’s hypothesis that, given the opportunity to use research-microscopes to perform hands-on experiments, anyone would fall in love with science, according to its website.

“He was debating between either [going to] do a prestigious post-doc in Singapore or buy an old bus on Craigslist and convert it into a mobile lab,” Weisberg says. “And he chose the latter.” 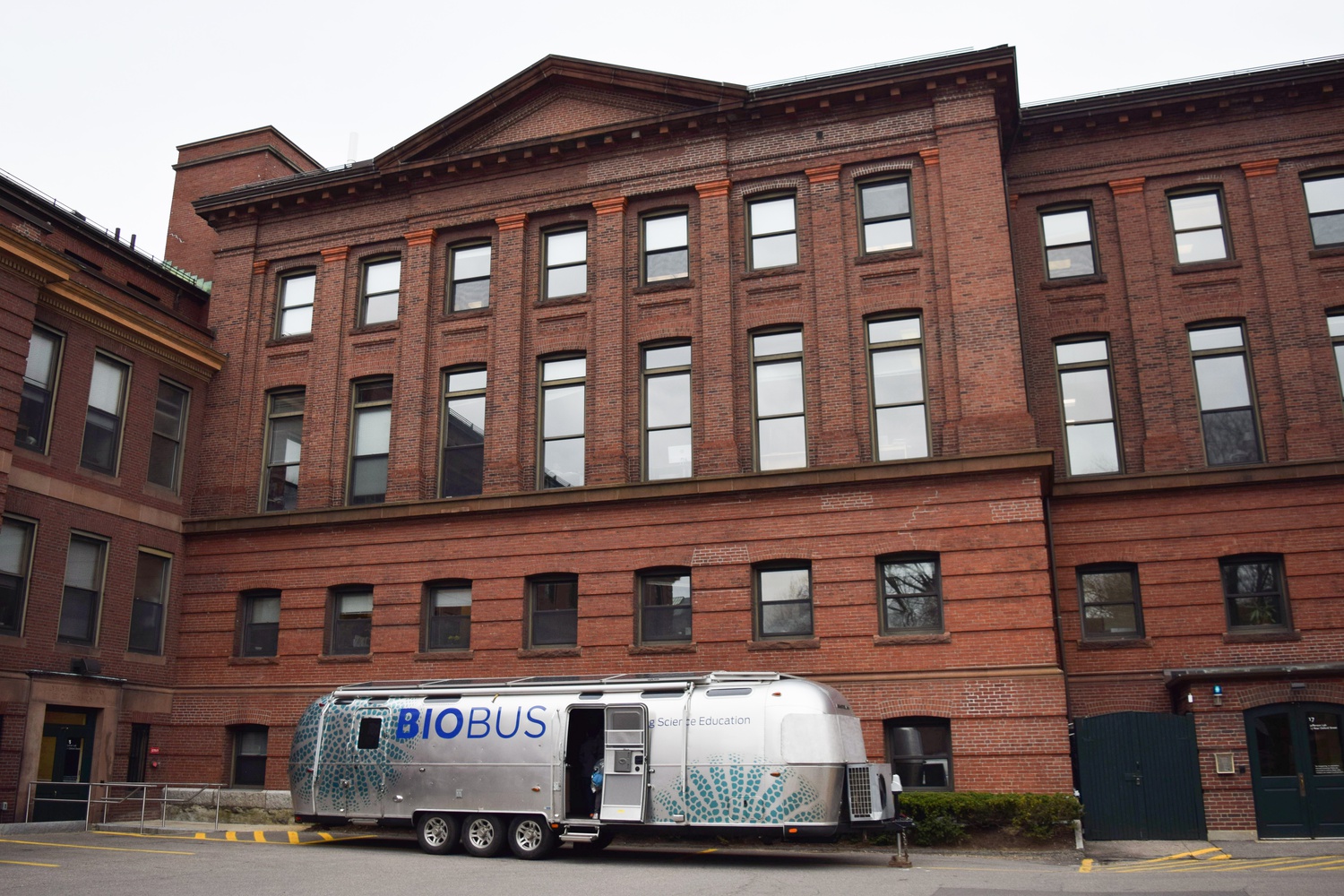 In 2010, Weisberg joined the BioBus team after graduating from Harvard College with a degree in Biology and Linguistics and completing a Masters of Science degree in Cell Biology at the Weizmann Institute of Science in Israel.

Though Weisberg says she enjoyed her time researching, she was frustrated by her inability to communicate it to people outside her field.

“I felt really lucky to have ended up in a place like Harvard where I could get real lab experience — and those experiences were transformational to me. I had a lot of support along the way, a lot of luck, a lot of privilege to get there,” she says. “I was very conscious of the fact that for the vast majority of people, especially if they're coming from communities of color, low-income communities, that they would just never have fell into science the way that I fell into it.”

Today, BioBus has expanded beyond its original bright yellow and blue 1974 bus to include the additional airstream trailer. Thurman explains that the company also now has a relationship with Columbia University, where they have partnered with the Zuckerman Institute to make science more accessible.

BioBus now has a space in the ground floor of the Jerome L. Greene Science Center on Columbia’s campus. Thurman says this fits nicely with the company’s larger goal of getting students excited about science — now in a concrete space in addition to a mobile bus.

The microscope projects a colorless image of the feather onto a TV. It is nearly impossible to discern its original feathered form from the abstract criss-cross line pattern now filling the screen. Thurman recounts that just the day before our tour, a middle school student had a “lightbulb moment,” realizing that the feather was in black and white since there was no light entering the electron microscope to give it color.

These are the moments — when students are suddenly excited by what was once confusing — that BioBus strives to create.