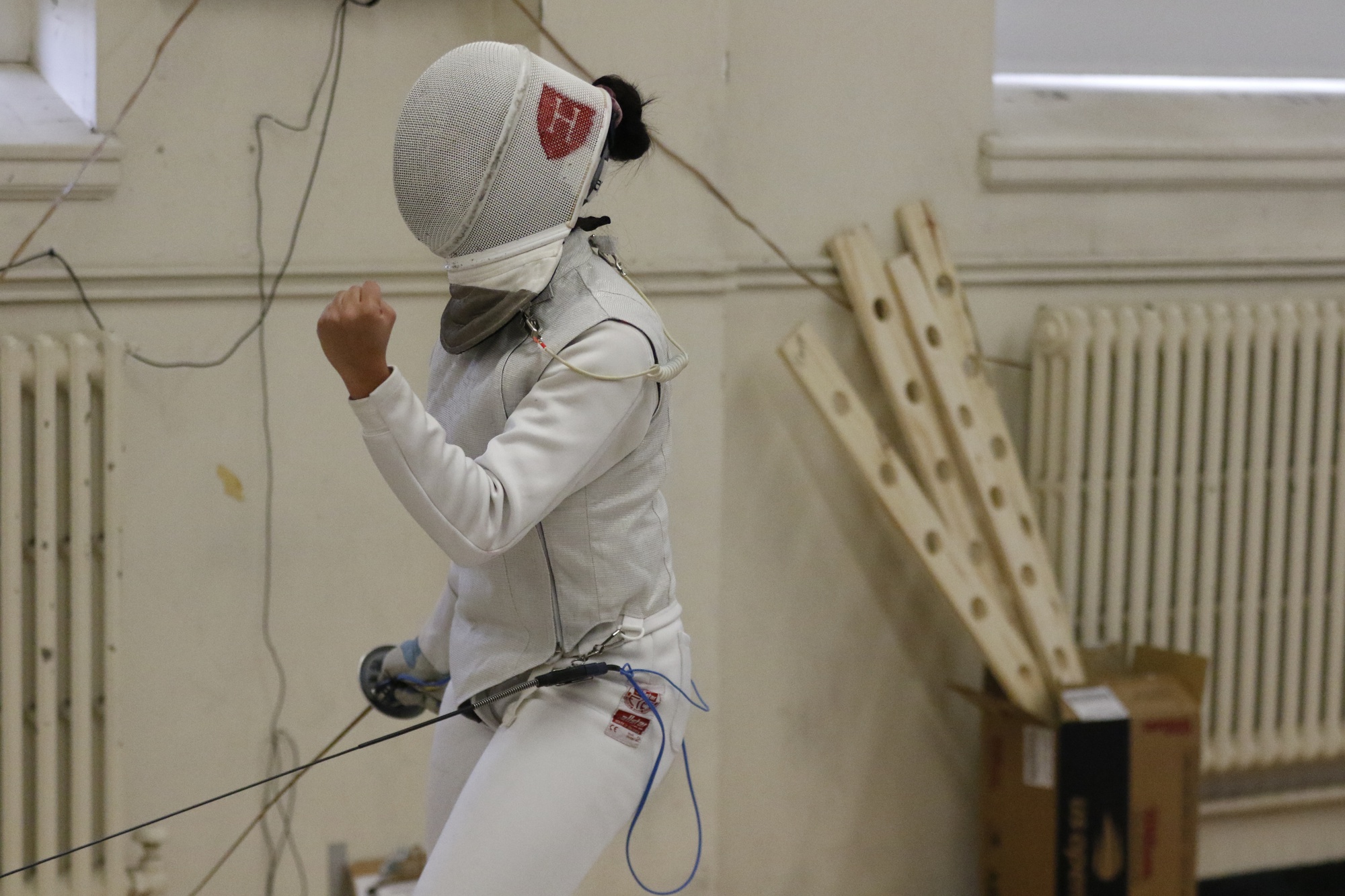 A Crimson fencer celebrates after securing a match victory at home against NYU. By Timothy R. O'Meara
By William Connaughton, Contributing Writer

With six All-Americans and a fourth place overall team finish, Harvard fencing concluded its season with a strong performance in the NCAA Championships last week.

The women’s team finished the year at 16-6, with a Ivy League record of 3-3, while the men finished at 16-3 with an impressive 5-1 record within the Ivy League.

The result was the highest finish for Harvard fencing since 2006, a year in which it won the tournament. The fourth place finish was the result of strong individual performances across the board.

For the women, first years Veronica Czyzewski and Elizabeth Tartakovsky took home bronze in the saber. The duo racked up 19 and 17 victories with a +43 and +40 touch differential, respectively. As a result, the pair earned First-Team NCAA honors on their way to a tied-third place finish in the semifinals. Fellow first year Cynthia Liu was recognized as an honorable mention in the foil, going 13-9, with a +4 touch mark, demonstrating the results of a talented and committed freshman class.

“We came in fourth at the NCAA championships with some really strong performances especially from the younger members of the team which bodes well for coming seasons,” junior foil George Haglund said. “They’re freshman and have been training very hard all season.”

On the men’s side, Geoffrey Tourette worked his way to a 17-6 record in the foil round robins with a +42 touch differential before advancing to the semi-finals. There he earned a bronze medal in the event, marking the first of two top 10 finishes for the men. For his performance, Tourette garnered First-Team NCAA honors. Fellow foil fencer and junior co-captain Duncan Rheingans-Yoo placed 18th in the event.

Freshman sabre fencer Daniel Solomon put together 12 wins and placed 12th in the event, which earned him an honorable mention for his performance. Junior epee fencer Erwin Cai racked up 14 wins on the way to a 7th place finish in the event. This finish marked the second NCAA recognition for the Crimson men as Solomon garnered Second-Team NCAA. Fencing the epee for Harvard, sophomore Adrien Thein-Sandler racked up 12 victories to finish 14th and senior Albert Chien put up 10 wins.

Overall, the Crimson put together a strong finish to the season with some strong individual and team performances to put together their best finish since 2006. Spirits are high and the team will look to build on its success next season.