Among some of the corporations that have expanded into the region in recent years is an unlikely investor — the Harvard Management Company. HMC, the University’s investment arm, oversees Harvard’s nearly $40 billion endowment.
By Alexandra A. Chaidez and Luke W. Vrotsos 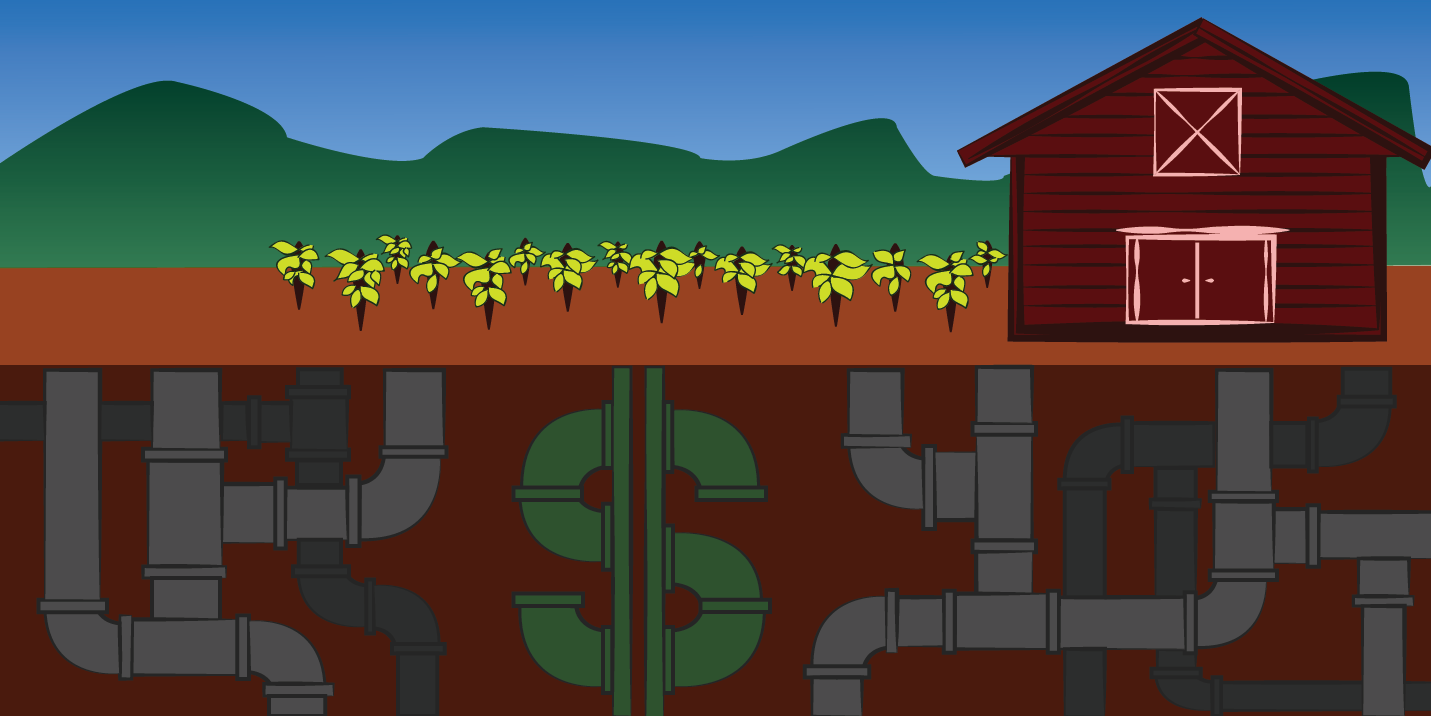 California farmer Brenton Kelly still remembers how the Cuyama Valley used to be.

The valley, located in California’s Central Coast region, has long been home to an abundance of wildlife. Historically, the land has been used for cattle pastures, and featured “beautiful rolling grassy hill” and an “amazing wildflower show,” according to Kelly.

These days, however, the land has been taken over by large commercial farms and vineyards, Kelly said.

“When you drive by orchard[s], the lines make these strange patterns,” Kelly, who is the president of the Cuyama Valley Community Association, said of the new landscape. “It's an optical illusion. All the lines line up and it's just this most mechanical...artificial kind of monstrosity in an area that used to just be, especially this time of year, the most gorgeous green rolling hills.”

Among some of the corporations that have expanded into the region in recent years is an unlikely investor — the Harvard Management Company. HMC, the University’s investment arm, oversees Harvard’s nearly $40 billion endowment.

In 2014, Brodiaea Inc. — a Harvard-owned corporation based in Delaware — bought 7,500 acres of vineyard land in the area for $10.1 million. The initial purchase, and subsequent development on the land, surprised some residents in the area; the region relies heavily on a fast-depleting water basin.

Despite Cuyama being one of the most severely overdrawn basins in the state, one of Harvard’s vineyards in the region recently proposed a plan to build three large reservoirs in the area, much to the chagrin of neighboring residents and farmers.

"There is a lot of confusion as to why they're doing this, where they are doing this,” said Cuyama Valley resident Lynn Carlisle. “Some people see it as draining an already critically overdrafted aquifer.”

After the project was announced and an initial report found no serious environmental impacts, a group of local residents began pushing back. Steve Gliessman and Roberta “Robbie” Jaffe, owners of Condor’s Hope Vineyard, filed an appeal with the county calling for a further review of the project.

On Tuesday, the Santa Barbara County Board of Supervisors approved a focused environmental impact report, an outcome local advocates applauded.

Harvard’s foray into wine country is part of a broader shift in the Central Coast of California toward large investors and new crops.

The Cuyama Valley was a major oil-producing region for decades before eventually shifting to a mix of crops, including alfalfa, oats, and carrots as the oil dried up. Water scarcity has been a persistent challenge in local agriculture for years.

Casey Walsh, a professor at the University of California, Santa Barbara, said the Central Coast region more broadly has become an increasingly popular area for wine-grape cultivation in the last few decades. Local residents are not concerned as much with vineyard competition, but more with water availability.

As more farmers have tapped the Cuyama Valley aquifer, groundwater levels have fallen precipitously, forcing some farmers to dig wells as deep as 1,000 feet. Government climate data shows the valley received less than a foot of rain annually on average between 1981 and 2000.

Harvard’s 2014 land purchase is not unusual among its investment practices: Natural resources investments are a sizable portion of the University’s portfolio, making up 10 percent of its holdings last year.

Two years after the purchase, Harvard-owned North Fork Ranch Vineyards filed an application with Santa Barbara County to build three “frost ponds,” large reservoirs intended to enable spray irrigation during the cooler months of February, March, and April, according to a county planning board report. The reservoirs’ total water storage capacity would be about 48 million gallons.

Some members of the local community, however, did not consider the review sufficient. Jaffe and Gliessman filed an appeal soon after, citing concerns about the reservoir’s groundwater use.

“As neighbors and farmers in Cottonwood Canyon, we disagree with the approval of the [initial environmental review],” the appeal reads. “The project represents major land use change from dry range land to heavily irrigated vineyard.”

Jaffe said she and Gliessman have been practicing “dry farming” for about 25 years. This method of growing grapes uses special tilling practices to minimize water use. Jaffe said that farms in the region have long used this practice, and that the new irrigation infrastructure would present a break from precedent that would threaten local water resources.

“This is our groundwater, our critically overdrafted basin, the groundwater mainly for frost protection,” she said. “They would be filling and emptying the reservoirs on a pretty continual basis.”

Jaffe said the community has had a mostly negative reaction to the reservoir proposal.

“The community was and is pretty outraged about it,” she said.

The Jaffe-Gliessman appeal launched a drawn-out legal back-and-forth between Harvard and its partners — Grapevine Capital Partners and Brodiaea — and local farmers.

In an April 2018 presentation to the region’s Groundwater Sustainability Association, Grapevine Capital Partners argued that the reservoirs will not negatively affect local groundwater supplies. The firm’s geological consultants presented a suite of evidence purporting to show that local residents’ concerns rest on “misconceptions” about the geology of the region.

After weighing the appeal of the environmental review, the Santa Barbara County Planning Commission decided at a September 2018 meeting that the initial review was “not adequate,” calling on its staff to produce a new environmental study for the project.

Brodiaea representatives promptly appealed this ruling, which the Board of Supervisors upheld at a meeting last month, but decided to push a final vote on commissioning a new study to its next meeting. After Tuesday’s vote, the new environmental review process is now officially underway.

After months of legal wrangling, Jaffe said she is happy to see a new review commissioned.

“I think that's a really important next step,” she said. “We can't possibly move forward with any of this until we have more scientific information.”

Several community members submitted public comments to the commission ahead of Tuesday's hearing advocating for a review.

One local property owner, Robert Ryan, wrote in an email that if the project were to proceed, his well “could be consequently dewatered,” a result he called "undesirable."

Another resident, Louise Draucker, criticized Brodiaea’s move into the valley.

“Brodiaea Inc.’s goals appear to be in direct conflict with the well-being of the residents of the Cuyama Valley,” she wrote in an email. “I have lived in Cuyama Valley for over 45 years, and I hate to see it abused and more of the natural world destroyed.”

With the environmental impact report now approved by the Santa Barbara County Board of Supervisors, Harvard will have to comply with an extensive study into its vineyard’s reservoir proposal. Reports of this kind are commissioned when there is “substantial evidence that a project may have a significant effect on the environment,” according to the Los Angeles Public Library website.

Das Williams, a member of the Board of Supervisors, said in an interview that the body will now hire an independent consultant to oversee the study. Williams added that the project applicant — in this case, Harvard’s vineyard — often pays for the study.

Jaffe, who attended Tuesday’s meeting, said a representative from Brodiaea was present and confirmed that the company would undergo this review instead of taking the case to the court system.

Both Jaffe and Carlisle anticipated that the review would last at least several months.

It is unclear what the review will ultimately address, but its impact on groundwater remains the most salient issue for residents.

“It's our lifeblood,” Jaffee said. “We have families that have been in our area and farming and ranching in our area for five generations, and we're really all across the political spectrum but we're very much together on the fact that we really need to protect our groundwater.”