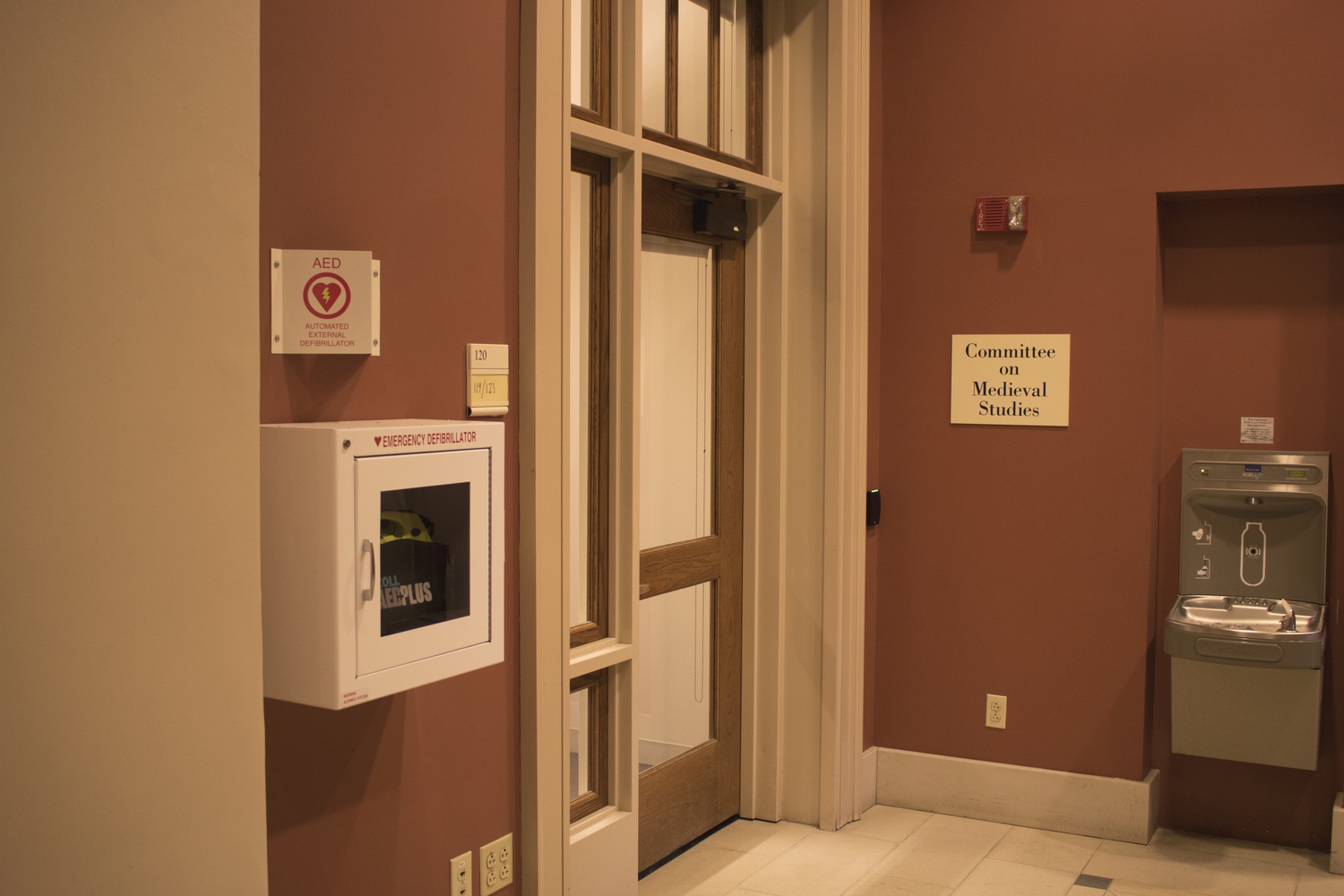 Some students want Narcan to be available in AED boxes like this one across campus. HUHS Director Paul Barreira, however, has questioned the logistics of the proposed initiative. By Sung Kwang Oh
By Michelle G. Kurilla and Tamar Sarig, Crimson Staff Writers

Harvard University Health Services Director Paul J. Barreira raised concerns about the logistics of expanding access to naloxone, a drug used to reverse the symptoms of opioid overdose, as HUHS considers a proposal to make the drug more widely available to the public.

Eana X. Meng ’19 and Kailash S. Sundaram ’19 are currently pushing to make naloxone available to the public in automatic external defibrillator cabinets located across Harvard’s campus. Though HUHS is reviewing the proposal, they have not yet taken an official stance, according to Barreira.

In an interview last week, Barreira discussed several logistical hurdles surrounding the implementation of the plan.

Maria Francesconi, HUHS senior director of nursing and health promotion, said they support making naloxone available on campus but questioned whether a sufficient need exists for expanding access to the drug.

“Once we start putting drugs out into the community, we'd have to put into place some kind of a monitoring system and we'd also have to figure out if a dose got used by someone in the community,” Francesconi said.

She added that CrimsonEMS and the Harvard University Police Department already carry Narcan, a brand of naloxone.

“One of the questions that we still have to talk about with the students who are interested, I think, is what do the students see as the benefit over what currently exists?” Barreira said.

Meng and Sundaram said the benefit of expanding access to the drug outweighs any cost the University might face. They said their current proposal to put naloxone in every AED boxes on campus would cost far less than continuing maintenance of the AED boxes.

“A life is a life, right?” Meng said. “Preventing things is important, and then more than anything, this process has been about raising awareness on the opioid crisis. I think the stats are that at least 100 people overdose in the country a day and just because it's not a visible thing — it's a very silent invisible epidemic — doesn't mean that we should be turning a blind eye to it.”

Beyond the scope of Harvard’s campus, Meng and Sundaram said they believe that their plan will increase accessibility and raise awareness among Cambridge residents. Construction workers and people experiencing homelessness have been disproportionately affected by the opioid epidemic, according to Sundaram.

The two said they believe their proposal could help address the epidemic at large, especially as Harvard continues its construction projects and Cambridge’s homeless population increases.

“With public health, there is often a window of opportunity and if you don't act then, it's often hard to act later down the line,” Sundaram said. “The opioid crisis is on people's minds now and so we have a responsibility as one of the nation's leading universities to step up and hopefully lead the way for other universities to do the same thing.”

HUHS spokesperson Michael Perry confirmed in an emailed statement that HUHS is “exploring details of the implementation” of Meng’s and Sundaram’s proposal.

“Before making any decisions, HUHS plans to facilitate conversations across the Harvard community to best understand the needs of various stakeholders for Naloxone,” Perry wrote.

HUHS will respond to Meng’s and Sundaram’s proposal by March 1, according to Francesconi.

—Staff writer Michelle Kurilla can be reached at michelle.kurilla@thecrimson.com.