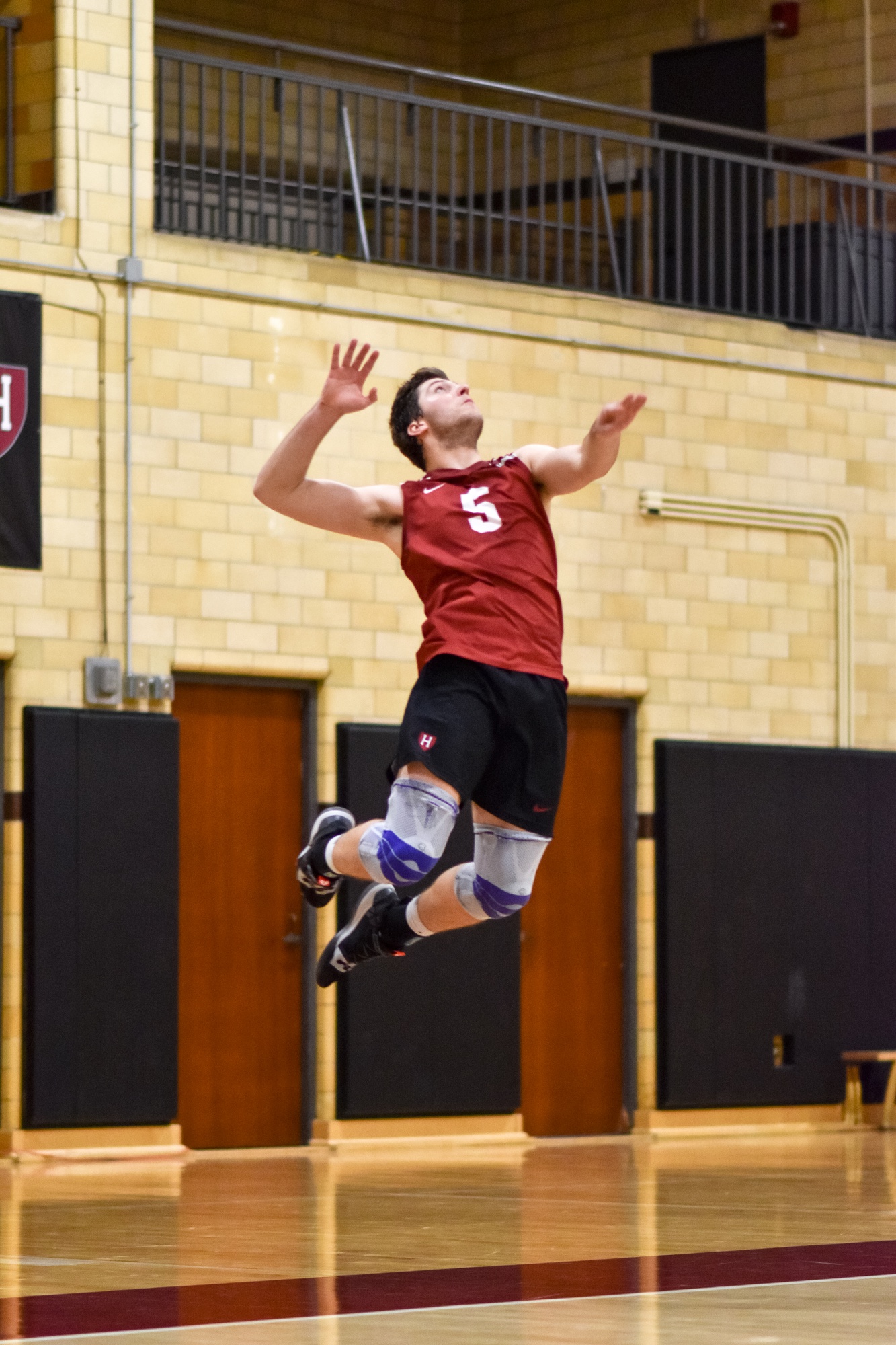 Sophomore Griffin Schmit goes up for the serve in prior action against Purdue Fort Wayne. By Quinn G. Perini
By Matthew Mu, Crimson Staff Writer

Harvard finished its matches with an even split, losing a match to Princeton on Friday night but rallying strong against NJIT for a 1-1 weekend.

Coming off of a disappointing loss to Princeton on Friday night, Harvard (EIVA, 2-2) came back ready against New Jersey Institute of Technology (EIVA, 0-2). The first set saw both a strong offensive and defensive force by the Crimson. The blocking duo of freshman Ryan Hong and sophomore Griffin Schmit opened up the Harvard lead during the middle of the set, only further aided by freshman libero Jason Shen’s spectacular digs. Ultimately, Harvard dominated the first set 25-18.

The second set saw an even back and forth as both teams exchanged points and possessions. An ace by the Highlander’s 11 sparked a lead between the two teams, eventually having NJIT up by four at 18-14. With Harvard down, a series of spikes by junior Matthew Ctvrtlik and Schmit allowed the Crimson to come back 21-23. However, the Highlander’s offense proved too strong as they took the second set 25-21 and equalized the match at 1-1.

In the third set, both teams came out with ferocious energy. Two quick spikes from senior Trevor Dow brought a 10-7 lead to the Crimson. However, the Highlanders rebounded with a series of spikes and kills and brought the set to 14-14, despite the best defensive efforts of libero Shen. A vicious spike by freshman Campbell Schoenfeld broke open the deadlock, putting Harvard up 18-15. After a quick timeout by the NJIT side, the Harvard offense came back even more dominant, going on an unanswered offensive tear of 7 points to lead the set 24-15. The set was closed off with a dominant spike by the Crimson, ending the set 25-16.

Ready to finish the match, Harvard’s Schoenfeld opened up the set with a dominant kill. However, a series of mishaps allowed the Highlanders to grow their lead to 6-2 before a kill by freshman Ryan Hong gave Harvard a glimmer of hope. The Crimson rallied back from a four point deficit to bring the set to 10-12. However, NJIT managed to hold on to their lead, pushing the match to a fifth set.

With intensity building, the fifth set saw a back and forth as the teams tied up 7-7. A block by co-captians Ctyrtlik and Dow gave Harvard the lead. A series of spikes and kills ultimately lead to a Crimson victory, ending the set 15-12 and winning the match 3-2.

“Our first five set match win is a really good sign for us. We have a lot of young guys out there making a lot of progress every week and to get this win, these guys have really earned it,” Coach Baise stated. “We played better at the service line and put pressure on their passers. This was the complete game that we were looking to put together.”

PRINCETON 3, HARVARD 1
After a dominant win against conference rival Saint Francis, Harvard came back ready to continue the effort on their home defense this weekend. Facing Princeton (EIVA, 3-0) on Friday, Harvard (EIVA, 2-1) fell short on the first set, dropping it 18-25. However, a strong rally in the second set allowed the Crimson to win 25-23. With the match tied at 1-1, a tense rally between the two teams eventually settled with a Tiger victory, 25-22.

Despite its best efforts, Harvard was unable to equalize the match in the fourth set, allowing the Princeton to claim the match 3-1 with a 25-20 final set. In terms of all-time record, the Crimson fell to 23-36 against the Tigers.

“We didn’t play great defense,” said head coach Brian Baise. “We know we have to defend better. We’re going to have to continue focusing on defense. If we can slow other teams down, we’ll give ourselves a better chance to win.”

“It’s always tough taking a plane flight somewhere and playing back to back days in a crowded gym,” Ctyrlik stated. “It’s going to be another test and we have to move forward in the season. I think we’re going to keep improving and see some good things next week.”

“We’ve got a big weekend next weekend against Charleston so we’re certainly going to keep pushing,” Coach Baise said.“They’re really important matches and we’re going to continue to focus on defense.”

Harvard will be travelling to West Virginia next weekend for matches against Charleston on Friday and Saturday.

— Staff writer Matthew Mu can be reached at matthew.mu@thecrimson.com.