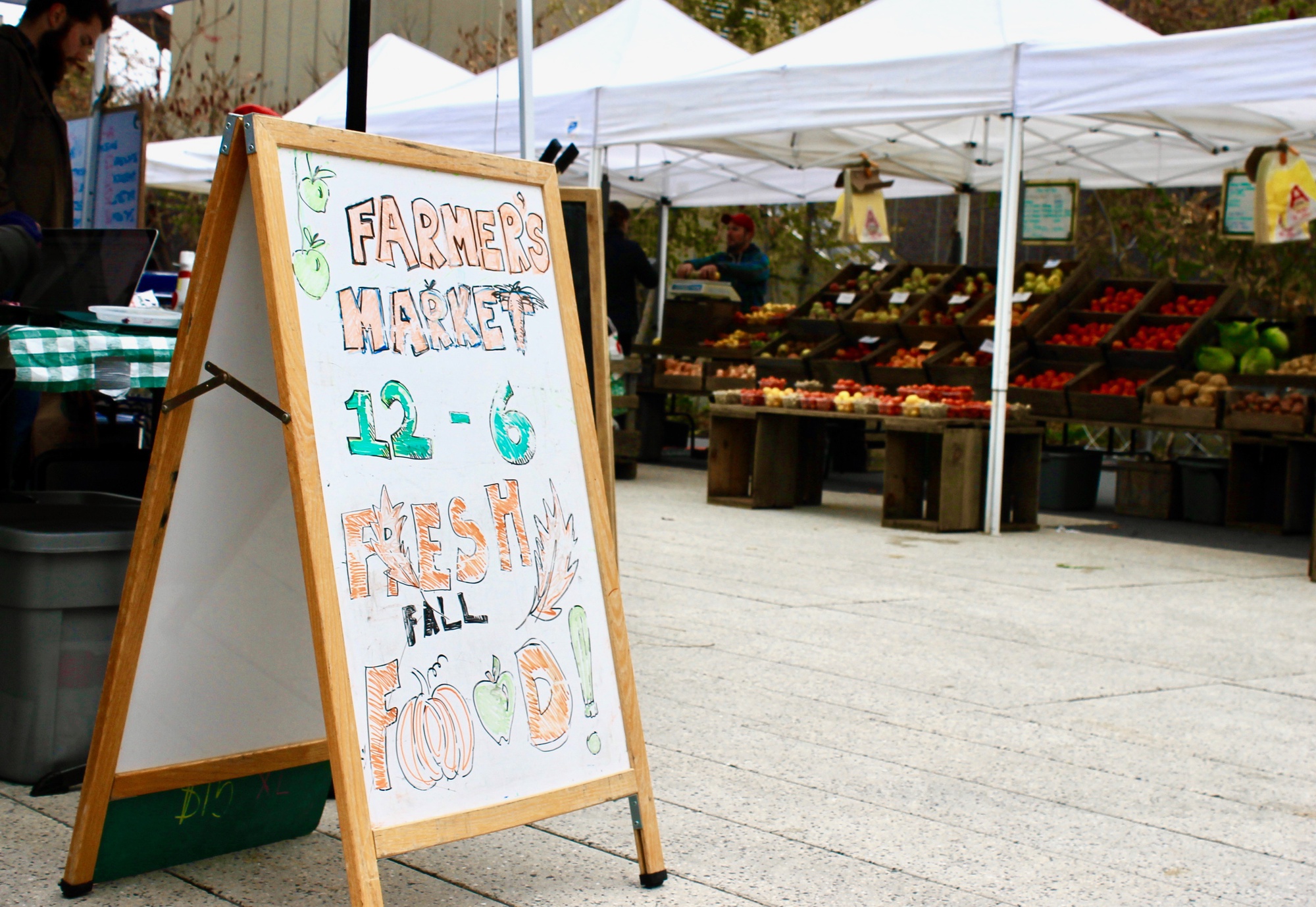 An unorthodox, unapologetic upgrade on the classic cereal-and-granola-schtick, each of GoodieKrunch’s crumbs holds the seed of a remarkable story.
By Luke A. Williams

Open a bag of GoodieKrunch and you’ll find flaky clusters of brittle, baked coconut goodness. A fresh, almost floral aroma wafts out of the bag. An unorthodox, unapologetic upgrade on the classic cereal-and-granola-schtick, each of GoodieKrunch’s crumbs holds the seed of a remarkable story.

GoodieKrunch is the brainchild of Haverhill, Mass. resident HamdAllah M. Olona. It’s a recent arrival to the Farmers’ Market at Harvard, held every Tuesday in the Science Center Plaza during the fall.

Across a span of 40 years and countless miles, Olona carried the GoodieKrunch recipe from Nigeria to her dorm room’s kitchen in England, and in 2018, the recipe arrived at Massachusetts farmers’ markets. What started as her grandmother’s sweet treat is now Olona’s hope that soon — within the next five years — she’ll sell her product in stores across the nation.

What’s now known as GoodieKrunch began as “coconut candy,” the phrase Olona’s grandmother would shout to Olona and her 17 siblings to tempt them home. Olona grew up in her chieftain father’s compound, and some of her fondest memories center around sharing the “candy” with her grandmother.

As a child, Olona’s parents made sure the entrepreneurial spirit ran “in [her] blood.” Her father ran two Nigerian Peugeot branches, and her mother served as the regional Coca-Cola distributor.

“I got involved in their businesses at a young age. I learned French because I started helping my dad with his business so much. I learned it to be my dad’s translator,” Olona recalls. (Olona would quietly reveal later that in addition to French and English, she also speaks Yoruba and a bit of Arabic. Her son, quiet throughout the rest of the interview, perked up in response to this admission and looked at his mother with pride.)

“Navigating your business, logistics and all that, I’ve known it since I was little,” Olona says. “Starting GoodieKrunch was like a piece of cake for me.”

But before “coconut candy” would become “GoodieKrunch,” Olona’s father sent her to a private school and university in Cambridge, England, where she studied finance and accounting. While abroad, Olona would bake her grandma’s “coconut candy” for herself and guests. She grew accustomed to dismissing thankful guests’ suggestions to sell her “candy” on the market.

Upon graduating university, Olona moved to Canada and met her husband, following him to Cambridge where they would start a family. While raising her four children, Olona worked for CitiGroup, Cambridge pharmaceutical companies, Philips Electronics, and finally, at National Grid, an electricity and gas provider. And she continued making her trademark family coconut candy on the side.

That is, until Olona realized that her grandmother’s candy could give people with gluten intolerance an alternative snack option. Upon realizing that the treat could fill a practical void in the food market, Olona gave in to her friends’ pleas and trademarked the name “GoodieKrunch” in 2017. In 2018, she began selling GoodieKrunch at two Somerville farmers’ markets on Saturdays. 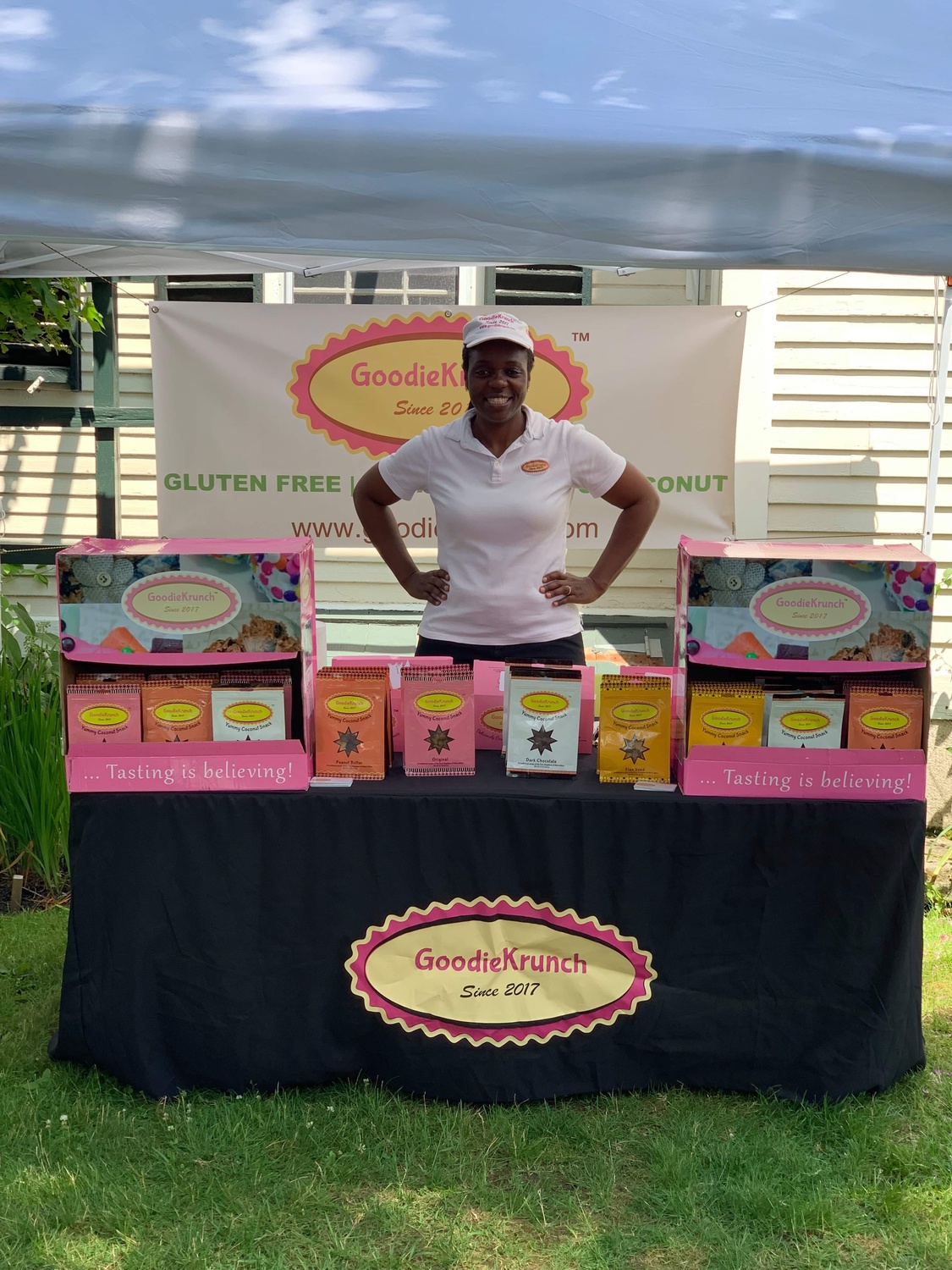 GoodieKrunch — which sells a rich, crunchy combination of granola, coconut and other healthy ingredients — recently arrived to the Harvard Science Center Plaza Farmers’ Market, held every Tuesday during the fall. By Courtesy of Tita Antonopoulos

On top of working at National Grid and raising four children, Olona began to rent a commercial kitchen and hired one assistant chef. The pair would bake GoodieKrunch in any spare time they could catch during the week.

This spring proved fateful for GoodieKrunch. Olona applied to the annual competition held by the Massachusetts-based nonprofit “Entrepreneurship for All,” or “EforAll.”

Comparing the program to the television phenomenon “Shark Tank,” Olana explains, “E for All is the tank without the shark… They mentor you, they teach you, they give you one or two mentors who can guide you through the process of being an entrepreneur, and in addition, you win money.”

Just one month later, Olona lost her job at National Grid along with roughly 100 others. Olona, however, views the layoff as “a blessing in disguise.”

Since last spring, Olona has made expanding GoodieKrunch her priority. She worked to craft new flavors — ranging from chocolate, peanut butter, and flaxseed to a new keto-fruit option — and to expand her product’s reach across Massachusetts. With the help of four weekend staff members, Olona now regularly sells at seven farmers’ markets in the Greater Boston Area.

Now, Olona is eyeing the retail market, hoping to expandexpanding into local grocery stores and negotiating deals with the likes of Stop & Shop, Whole Foods, and Market Basket. GoodieKrunch is growing, and Olona already has plans to expand even further.

“We’re online as well,” Olona says. Over the course of our conversationOlona at first seems reluctant to admit her ambition. But after a few attempts to pierce her quiet demeanor, the salesperson “in her blood” emerges: “In five years I could see GoodieKrunch going national, definitely.”

A few obstacles still stand in the way of Olona’s vision. For starters, she doesn’t own a dedicated kitchen yet.

“Currently I’m renting my commercial kitchen,” Olona sai. “I’m planning to actually purchase my own stand-alone building to manufacture GoodieKrunch there and to have a storefront where people can buy GoodieKrunch.”

And, Olona is currently “doing the math” to determine whether retail or food services will be the more profitable avenue for GoodieKrunch’s expansion. Pursuing food services — vending machines, hotels, and university dining halls, for example — could be more profitable than striking a deal with a region-wide grocery store.

No matter what, Olona stresses that “the most important thing is that GoodieKrunch tastes good. If it doesn’t taste good, it won’t sell. Why jeopardize the taste for cost-effectiveness?”

As our interview comes to an end, Olona brings the conversation back to her grandmother and her village in Nigeria. GoodieKrunch, she argues, is more than a family recipe carried across oceans — it’s a reflection of an entire town’s sensibility.

“In my country, the coconut is like the tree of life. Coconut oil, water, meat. You can go on and on about coconut,” Olona says. “Back home in Africa when a coconut tree dies, we chop the fronds off, take off the leaves, leaving only the stalk. Then, you can make a broom out of that. A tree that has fallen and died is then firewood for us. From life to death the coconut tree is useful. I wanted to use nature’s gift when I started GoodieKrunch.”