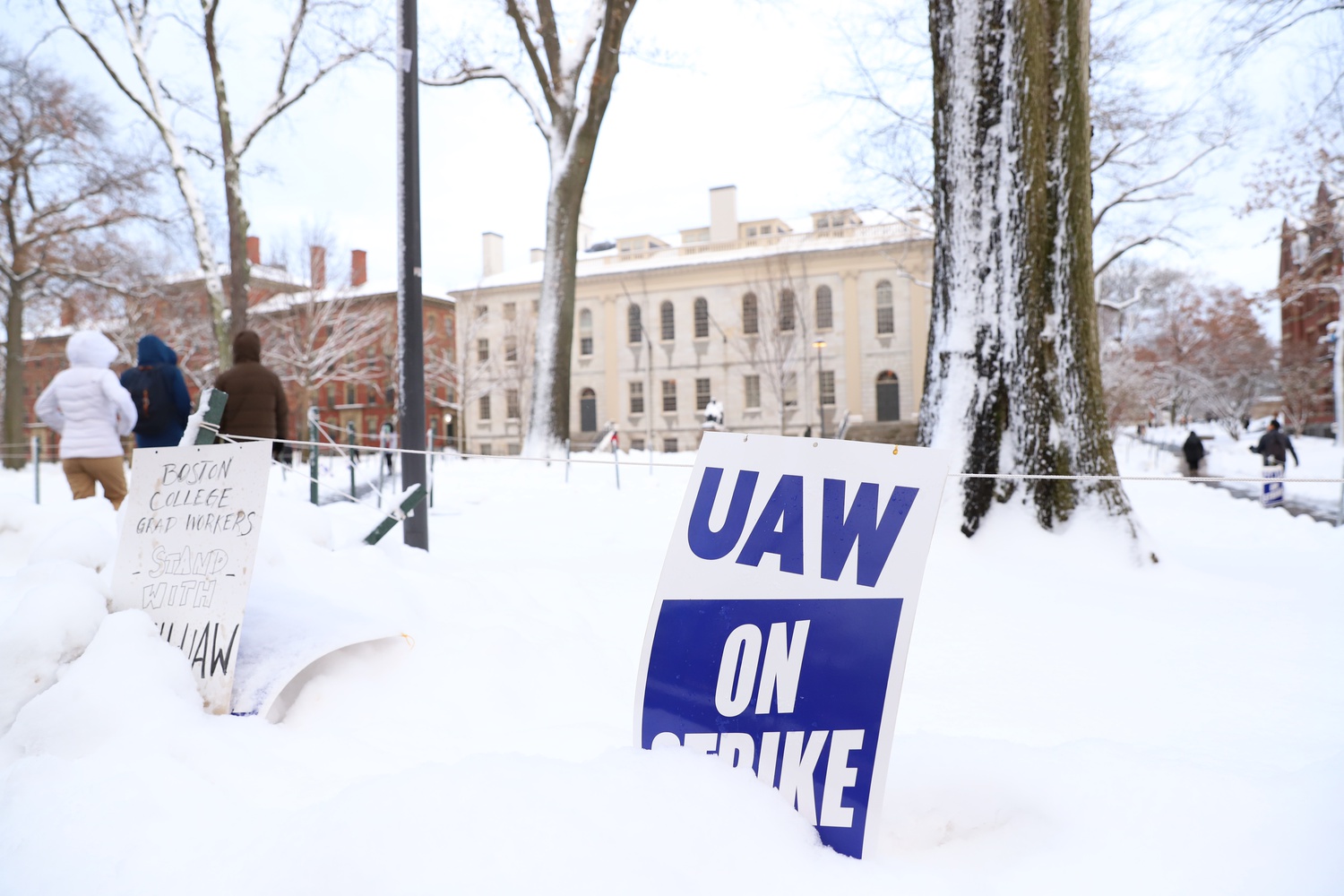 A UAW sign is left in the snow in Harvard Yard on the first day of the strike. By Kathryn S. Kuhar
By Aidan F. Ryan and Ruoqi Zhang, Crimson Staff Writers

More than a week after Harvard’s graduate students union began its indefinite strike, both University administrators and union negotiators have yet to schedule any new sessions to work toward a contract.

Harvard Graduate Students Union-United Automobile Workers went on strike Dec. 3 after voting members overwhelmingly approved of a strike in a strike authorization vote late October. Negotiations, which began in October 2018, had produced 12 tentative proposals during the 28 bargaining sessions that preceded the strike. Differences, however, remain on key issues including compensation, health benefits, and a grievance procedure for sexual harassment and discrimination cases.

University President Lawrence S. Bacow said in an interview Friday that the University has spent the past week evaluating an updated proposal submitted Dec. 2 by the graduate students union.

“We’ve exchanged proposals. We’re evaluating their proposal and will be coming back to them with another,” Bacow said. “So you know, negotiations continue.”

Bacow said Friday that new bargaining sessions have not yet been scheduled because the University needed time to thoroughly analyze the most recent proposal.

“It takes a while to actually analyze a proposal. There are lots of dimensions to it and trying to understand the economic impact for the University,” Bacow said. “That requires consultation with a bunch of different schools because it has different consequences for different schools.”

But on Tuesday, University negotiators offered a date for the next bargaining sessions with the union, University spokesperson Jonathan L. Swain wrote in an email that evening.

“I just want to make it clear, they have not come to the table at all,” Lisa Xu, an organizer with the United Automobile Workers, said in a rally Tuesday before the next session was offered. “We sent them an email on Monday before our strike began asking them when our next bargaining session would be, and they have not replied. Our inbox is empty.”

Members and supporters of the union have been picketing at Harvard’s Cambridge and Longwood campuses every weekday since the beginning of the strike. HGSU – which boasts a 4,000 strong membership across the University – represents graduate and undergraduate teaching staff, as well as graduate research assistants.

Striking union members have withheld their teaching responsibilities — including holding office hours, grading assignments, and proctoring final exams — and halted all paid research responsibilities not included in their academic programs during the strike. Protestors also picketed in front of loading docks and delivery entrances across Harvard to block deliveries.

Bacow also said that while the University hopes to come to an agreement with the union soon, they’ll be prepared if the strike continues into the new year.

“It's our hope that it won't come to that, but we try to anticipate and plan for every contingency,” he said.