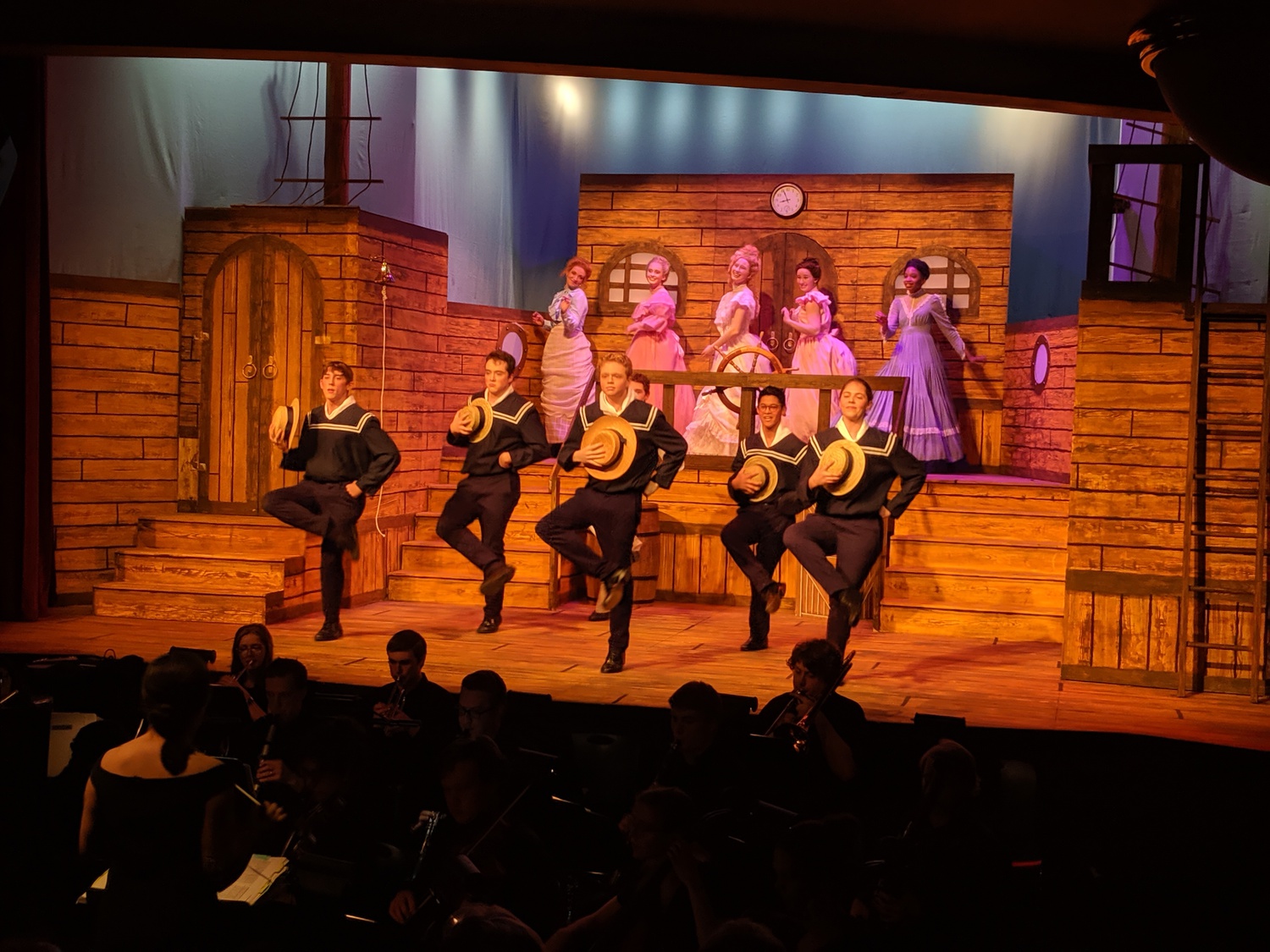 H.M.S. Pinafore: The Lass that Loved a Sailor By Courtesy of the Harvard-Radcliffe Gilbert and Sullivan Players
By Tomás Guerrero Jaramillo, Contributing Writer

Even in its 13th iteration at Harvard, “H.M.S Pinafore” can still make an audience burst into laughter with every joke. This year, the timeless comic opera is just as brilliantly performed and produced as ever. The operetta at the historic Agassiz Theater boasted not only great singing, but also tons of comedic entertainment.

“H.M.S. Pinafore” is a dramatic comedy telling the love story between Josephine (Chloe Saracco ’21), the daughter of Captain Corcoran (Nathan Robinson ’20), and Ralph Rackstraw (Henry Zumbrunnen Tufts ’20), the smartest sailor in the crew. Josephine, however, has an arranged marriage with a man she has not yet met, Sir Joseph Porter, KCB (Mike Shirek ’20), whom she certainly does not love. Impossible love, treason, and upending twists — the plot has it all.

The characters of Captain Corcoran and Sir Joseph Porter, true to their history, embodied the queer spirit that is essential to this work and to the tradition of the Harvard-Radcliffe Gilbert and Sullivan Players. “Jeffrey Davies [as Sir Joseph] limp-wrists his way to great applause, mincing about the stage in white tights and giggling with the mannerisms of the stereotyped homosexual,” reads a 1973 Harvard Crimson review of “H.M.S. Pinafore” by Peter Y. Solmssen ’76. Solmssen’s words indicate a flippant, arguably irresponsible, examination of gender and sexuality, but it is true that “the sissy,” as a pillar of Camp aesthetic, has been present in representations of homosexuality in theater and film for ages. In this version “H.M.S Pinafore,” in contrast to works which have used the trope before, the other characters present do not express any disgust or mockery for the femininity expressed by these men. If anything, they celebrate it.

Our 2019 Sir Joseph, adorned with Victorian makeup, enters the scene with his sisters, cousins, and aunts and puts together a magnificent performance. His court (Nadine Jackson ’23, Sabrina Richert ’20, and Jamie Paterno-Ostmann ’21) helps set the stage for the subtle gender-bending to come. When Sir Joseph Porter bounces on his knees and holds his hands up in the air, his sisters and his cousins and his aunts they join him happily in his performance.

Before this triumphant entrance, there are already references to homosexuality with the use of the words “gay” and “queer” and the gender-bending performances of characters like Captain Corcoran. The melodramatic mannerisms of these characters that have long been a source of shame for some gay men — and still are for many straight men — stand center stage in “H.M.S Pinafore.” Add this to the plot of an exaggeratedly straight love story and you will have wonderful absurdity that can only make you laugh. Shirek’s performance is full of melodrama and refreshing humor — there is no moment that he appears on stage without causing a reaction from the audience. Robinson’s character, on the other hand, uses a subtler blend of wit and sarcastic humor to make the audience laugh. This stands in contrast with the plot which revolves around a straight love story. These male characters in “H.M.S. Pinafore” are unapologetically feminine, drawing on the older trope of a “sissy” character — but this time without any shame and degradation.

On the technical side, the show’s set created a perfect backdrop for the performance. Resembling an 18th century wooden ship, it featured raised platforms, the base of masts, and the cherry on top: a projection of the shadows of the missing parts of the ship. The orchestra delivered a performance at par with the amazing soprano, and each piece in the operetta was just charming.

The technique of its leads similarly stood out — Josephine and Buttercup (Rachel Share-Sapolsky ’21) were the obvious stars of the night. Saracco’s voice as a soprano is just impeccable and captivated the audience in an instant. Share-Sapolsky’s singing also had the same swooning effect on the audience, enchanting the patrons like the pied piper. Every time they began to sing, the audience fell quickly into silence, almost forgetting for a moment about all the humorous nature of the show. Impressively, their characters remained grounded, inciting as much laughter as Sir Joseph Porter, KCB. Share-Sapolsky and Saracco’s voices brought this production to the next level, making it as serious as a full-blown opera without letting go of the style of the operetta.

All in all, the latest production of the Harvard-Radcliffe Gilbert and Sullivan Players attests to the decade-long history of the group. Melodramatic plot twists and all, this edition of “H.M.S Pinafore” by the HGSP is not one to miss this fall.