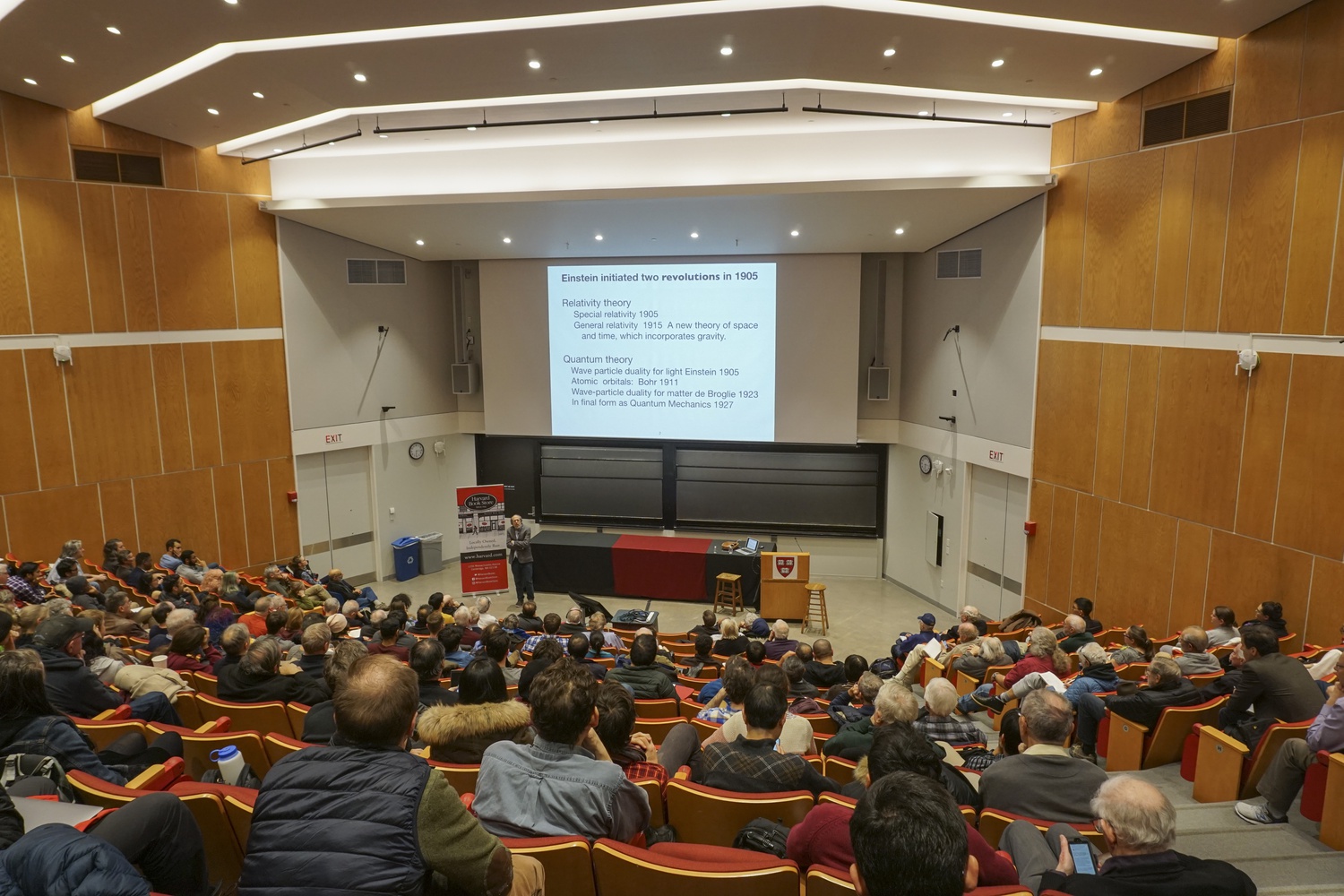 Lee Smolin, author of the recently released book “Einstein’s Unfinished Revolution”, gives a talk on Wednesday evening in the Science Center. His book discusses Einstein’s quantum mechanics and its limitations on our understanding of the world. By MyeongSeo Kim
By Stephanie H. Ashkar and Taylor C. Peterman, Crimson Staff Writers

Theoretical physicist Lee Smolin explained the incomplete nature of quantum theory before a packed lecture hall in the Science Center on Wednesday evening, discussing his newest book, “Einstein’s Unfinished Revolution: The Search for What Lies Beyond the Quantum.”

Smolin is a faculty member at the Perimeter Institute for Theoretical Physics, adjunct physics professor at the University of Waterloo, and a member of the graduate faculty of philosophy at the University of Toronto. His presentation was the latest in a series of book talks hosted by the Harvard Book Store.

Chanda Prescod-Weinstein '03, assistant professor of physics and astronomy and core faculty member in women’s studies from the University of New Hampshire, introduced the talk. Smolin served as her Ph.D. adviser, and she began by recounting the time she first met Smolin.

“Lee encouraged me to understand that becoming a physicist means growing into a whole person with broad interests,” Prescod-Weinstein said.

Smolin began the talk with a basic introduction to quantum mechanics and the idea of scientific realism, providing a foundational understanding of his book’s subject matter for audience members without a physics background.

“This talk is multi-level,” he said. “It’s to the non-scientists who are here for curiosity, and it’s to the colleagues and friends who are scientists.”

“You’re a realist if you believe that nature exists independent of our perception,” he added.

Smolin went on to explain how the past century’s theories of quantum mechanics are incomplete, adding that he has sought to fulfill Albert Einstein’s mission to develop a complete, realist theory that describes nature.

“The conclusion that I come to is that they’re all near misses. And nobody anticipated that,” Smolin said. “We thought, ‘We’re going to quantize gravity. How hard could it be?’ And we did.”

“We want to find the theory that tells the whole story,” he added.

“The biggest takeaway — maybe seeing him,” Hassan said. “I’m coming from a physics background, so maybe the first 45 minutes of the lecture, there was nothing new in it for me, but maybe the last couple of slides were really very interesting.”

Edwin Chng, a graduate student at the Harvard Graduate School of Education, said Smolin succeeded at making the talk accessible to all audiences, adding that it wasn’t “peppered too much with a lot of equations and theorems.”

“I did physics as an undergrad, so this was a great talk because I kind of revised and reviewed some of the knowledge that I had and also that he kind of is pushing on the frontiers of physics trying to get out Einstein’s unfinished theory,” Chng said.