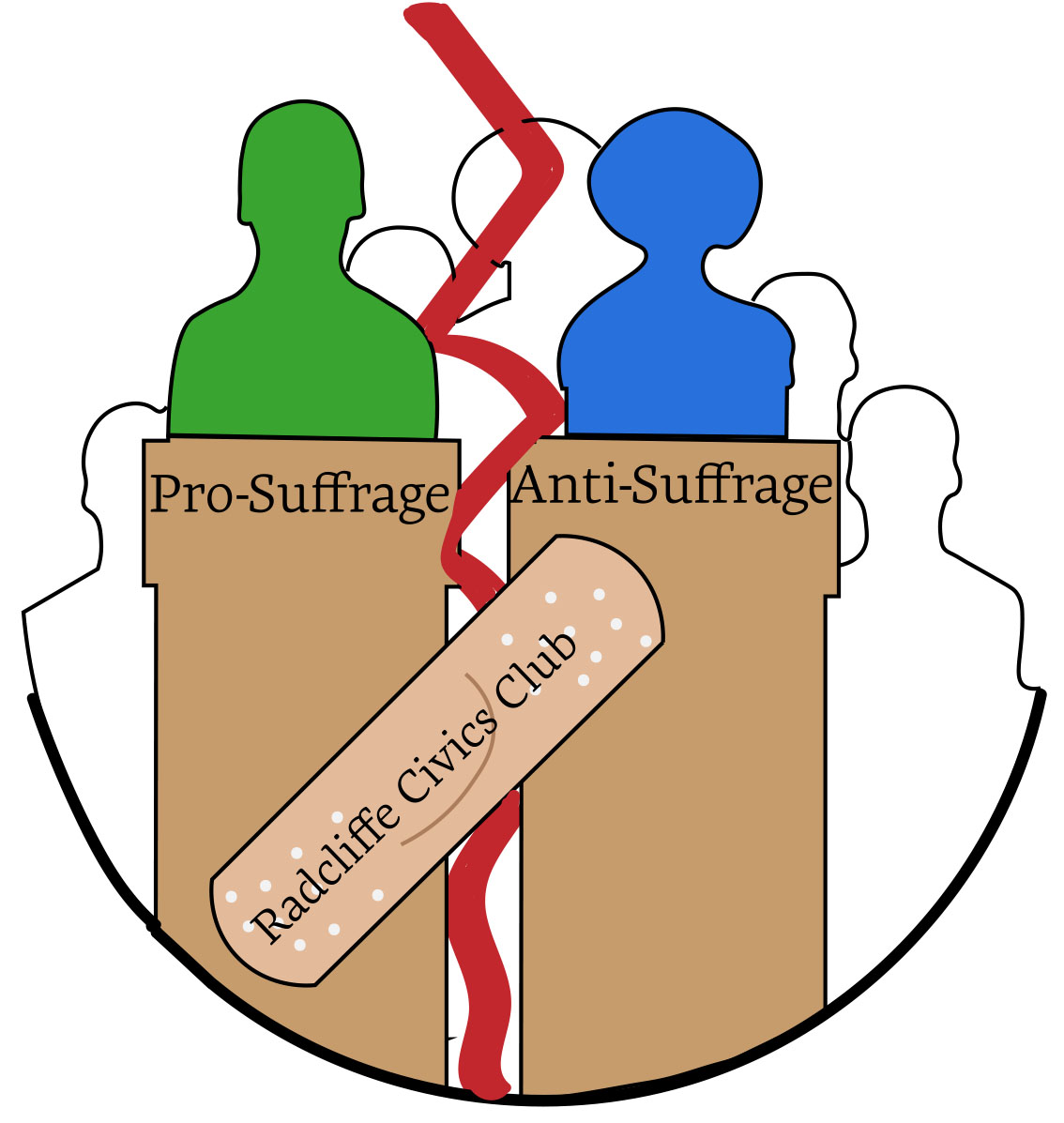 The Radcliffe Civics Club united students of drastically differing political backgrounds under one umbrella during its brief tenure in the early twentieth century.
Advertisement
Advertisement

In the early 20th century, an unlikely set of clubs coalesced into a vibrant outlet for debate on Radcliffe's campus.
By Liv R. Weinstein

In 1914, the Radcliffe Civics Club formed, unifying the school’s Socialism, Suffrage, and Anti-Suffrage Clubs under one organization. Despite the diametrically opposed ideologies of its sub-organizations, the Civics Club not only survived, but thrived, for six years.

As explained in the 1914 Radcliffe Student Handbook, the club’s initial goal was to “make each girl realize what part she, as a college graduate, will be expected to play in the political and economic world outside her college.” But this outward focus faded as the club became a space dedicated to student debate and discussion of political issues. This increased engagement with its chapters’ “utterly conflicting views,” as stated in the club description, turned out to be a key source of the Civics Club’s success.

The Radcliffe Civics Club united students of drastically differing political backgrounds under one umbrella during its brief tenure in the early twentieth century. By Meera S. Nair

Initially an umbrella political organization for its three chapters, the Civics Club began to publicize its embrace of “widely differing opinions” in the Radcliffe Student Handbook in 1917. Radcliffe formed the school’s first official Debating Club soon after, drawing new membership and prominence to the Civics Club as members competed in — and won — national debate competitions. The Civics Club also began hosting weekly debates over political topics ranging from “The Monroe Doctrine in its Relation toMexico” to “War – Is it Inevitable?” By 1918, these meetings boasted 70 regular attendees, despite being held at midnight and charging a 25 cent fine for each absence.

These discussions, it seems, never got very heated: Their goal was consensus. The purpose of each debate, according to Sarah Wambaugh, a Radcliffe alumna from the class of 1902 who advised the club, was to generate “warm political discussion in which practically all the members take part.” By September 1917, the group’s self-described aims were to “stimulate liberal and intelligent thought” and “reach satisfactory conclusions in current problems.”

As for why these debates remained so uncontentious, homogeneity across the Radcliffe student body might account for some of this “warmth.” Around this time, Harvard and Radcliffe students were almost exclusively white, and about 80 percent came from Anglo-Saxon Protestant upper-class backgrounds. One such student was Civics Club president Rosamond Eliot ’17 of Boston’s prominent Eliot family. Students’ elite status might have reduced personal stake — and, with it, strife — surrounding the political issues discussed. For instance, lighthearted debate over Philippine independence likely comes easier when you live thousands of miles from the Philippines.

But some argued that the responsibility that the Civics Club placed on members to hold their own in political debate was nonetheless valuable in its own right. In a 1916 issue of the Radcliffe Quarterly, Wambaugh praised the club’s emphasis on debate as a means to develop its members’ self esteem:

“As a training in ability to speak extemporaneously, and to express thought with ease and composure, the practice in discussion may produce valuable results,” she wrote, adding, “There is, I suppose, no one possession more desirable for the college woman than an ability to express herself in public clearly and with self-confidence.”

And, indeed, the club’s debate component seems to have left its mark on alumnae. In contrast to the Radcliffe graduates before them — nearly every 1913 and 1914 alumna who entered the workforce became a teacher or a secretary — numerous Civics Club graduates dedicated their post-college lives to tackling societal issues through political organizing, advocacy, and academic research.

Among Civics Club leadership alone: 1915-16 Socialist Chapter President Elizabeth Brandeis ’18 (daughter of Supreme Court Justice Louis D. Brandeis) became a prominent labor legislation expert and activist. 1919-20 Civics Club Vice President Elizabeth Boody ’20 (later Schumpeter) became an economist and expert on economic and political relations between the U.S. and the Pacific in the 1930s as war with Japan approached. 1919-20 Civics Club Secretary Frieda Gilbert ’21 lectured to her fellow members of Detroit’s Jewish community on behalf of the United Palestine Appeal, a group dedicated to alleviating the suffering of Palestinians — a staunch advocate for seeing the “other side” of the debate, as the Civics Club had so strongly encouraged.

Wambaugh had hoped that Civics Club discussions would reduce Radcliffe women’s “apologetic timidity” when speaking. Though the Civics Club dissolved in 1921 with the passage of the 19th Amendment, the outspoken, confident, and socially conscious women who came out of it suggest that Wambaugh’s wish may, at least in part, have been realized.