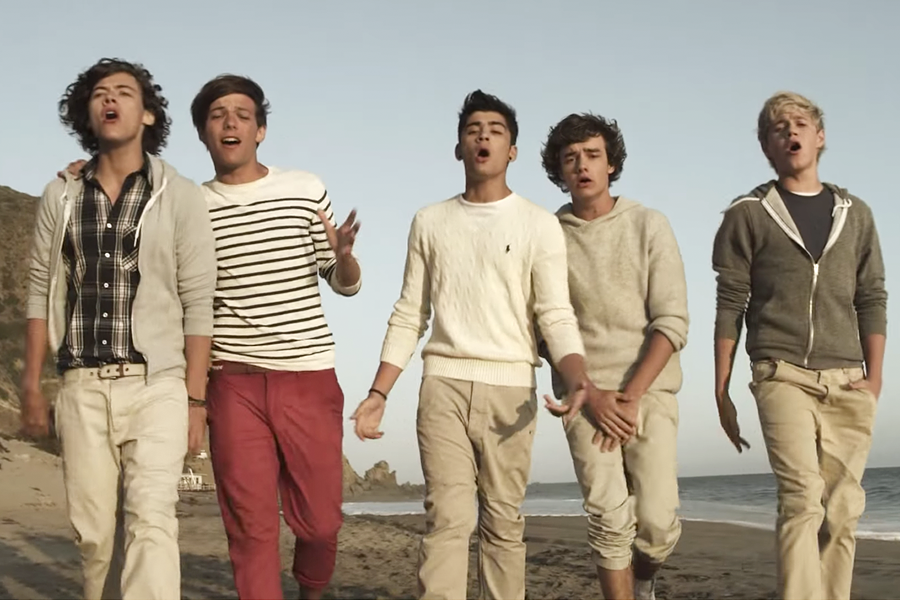 One Direction's "What Makes You Beautiful" music video By Courtesy of OneDirectionVEVO
By Nihal Raman, Crimson Staff Writer

Few periods of time stick in our minds as clearly as the tween years of 2012 and 2013. Cliques formed in school, kids threw raucous bar and bat mitzvahs, and many felt the awkward urge to ask middle school crushes to slow dance to Lil Wayne’s “How to Love.”

Many early 2010s albums received universal critical acclaim and will live on through their legacy. “Modern Vampires of the City” and “My Beautiful Dark Twisted Fantasy,” along with several others, are such examples. But the public should focus its attention not only on those excellent albums, but also on the music that dominated sweaty middle school dances and carpools for the early part of the decade. This music raised a generation of kids.

The five Brits rose to stardom in 2011 upon the release of their inescapable first hit. Seemingly, every middle schooler had a strong opinion on the band. Now, all of the members have gone their separate ways, but the couple of years that One Direction occupied countless iPod Touch backgrounds will not be forgotten.

Katy Perry made everyone want to achieve their own respective teenage dream. This song, looking back, seems simple and almost innocent compared to a lot of contemporary pop music, but through that innocence, it manages to capture the feeling of growing up in 2010. People worried about the mundane, lived hopeful lives, and devoured Ken Burns’ recently-released six-hour documentary “The Tenth Inning.”

My sixth grade English teacher used this song to introduce students to figurative language. Through the deeply profound metaphor of the stereo representing the most passionate recesses of the human heart and lyrics like “And all I ask is that you don't get mad at me/When you have to purchase mad D batteries,” Gym Class Heroes established themselves as key literary voices for the turn of the decade. The song also foreshadowed Adam Levine’s rapid rise in fame over the decade.

This hit transcended the Korean market that it was initially released for, becoming both an internet craze and a musical phenomenon. The song and its accompanying video are goofy, but “Gangnam Style” was an indicator of a legitimate trend: American charts would open up to non-English language hits like “Despacito” later in the decade.

Yes, the most important song of the early 2010s was released before 2010, but nobody can deny the ubiquity of this song at the time. Tell an early-2010s middle school dance attendee the phrase “Somebody call 9-1-1,” and most would respond with “shawty fire burning on the dancefloor” rather than calling the appropriate authorities. Besides, nothing strikes more fear into a tween’s heart than seeing an overzealous parent running to the center of the dancefloor, and “Fire Burning” had an incredible power to make middle-aged bar mitzvah attendees do just that.

—Staff writer Nihal Raman can be reached at nihal.raman@thecrimson.com.