The Peabody Presents ‘Caspian: The Elements’ 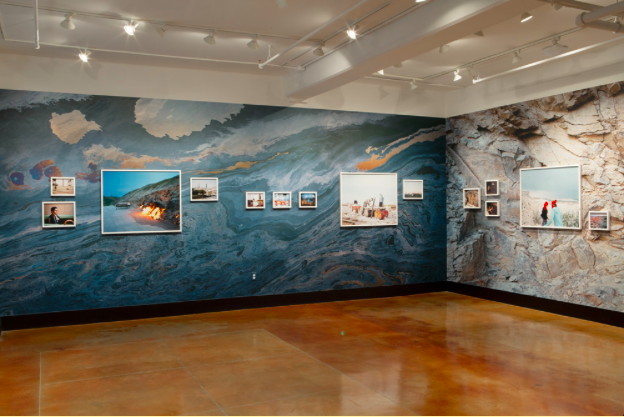 True to the fellowship’s stated themes, the art depicts the human condition through intimate portraits and landscapes found around the Caspian Sea. The photographs hang on three walls of a small room, where mural-sized photographs cover the walls themselves.

“You feel like you’re meant to feel the power of the landscape by walking into this space,” curator Ilisa Barbash said.

Inside the room, there are 27 photographs printed in different sizes and arranged in clusters along the walls. Outside, the last photograph, depicting what a caption dubs the “door of hell,” is exhibited in large format. The book version of “Caspian,” produced at the final stage of Dewe Mathews’s project, rests on a podium in a small corner in the room.

The entire process of the fellowship, from the selection process to the book’s finalization, takes about four years. The fellowship is awarded to upcoming photographers selected through solicited nominations and later evaluation of three projects of the final nominees. For her project, Dewe Mathews conducted an ethnography, couch surfing around the Caspian and engaging closely with the people that she met.

“She obviously had an interesting rapport with people,” Barbash said. “She said that she shared a lot of the photographs with people over Instagram.”

The contemporary photography exhibit stands in contrast with the rest of the museum. The Peabody Museum displays a small amount of its collection of artifacts, almost all of which are typical ethnographic and archeological materials from cultures around the world. One museum visitor, Jose Morinio, said that the presentation caught his attention.

“If the images don’t catch your eye, then you just pass by them,” Morinio said.

“The museum has been very embarrassed by its past,” Patterson said. “All over the world they have been doing this, but in America it’s pretty bad and explicitly racist. They’re trying to make up now.”