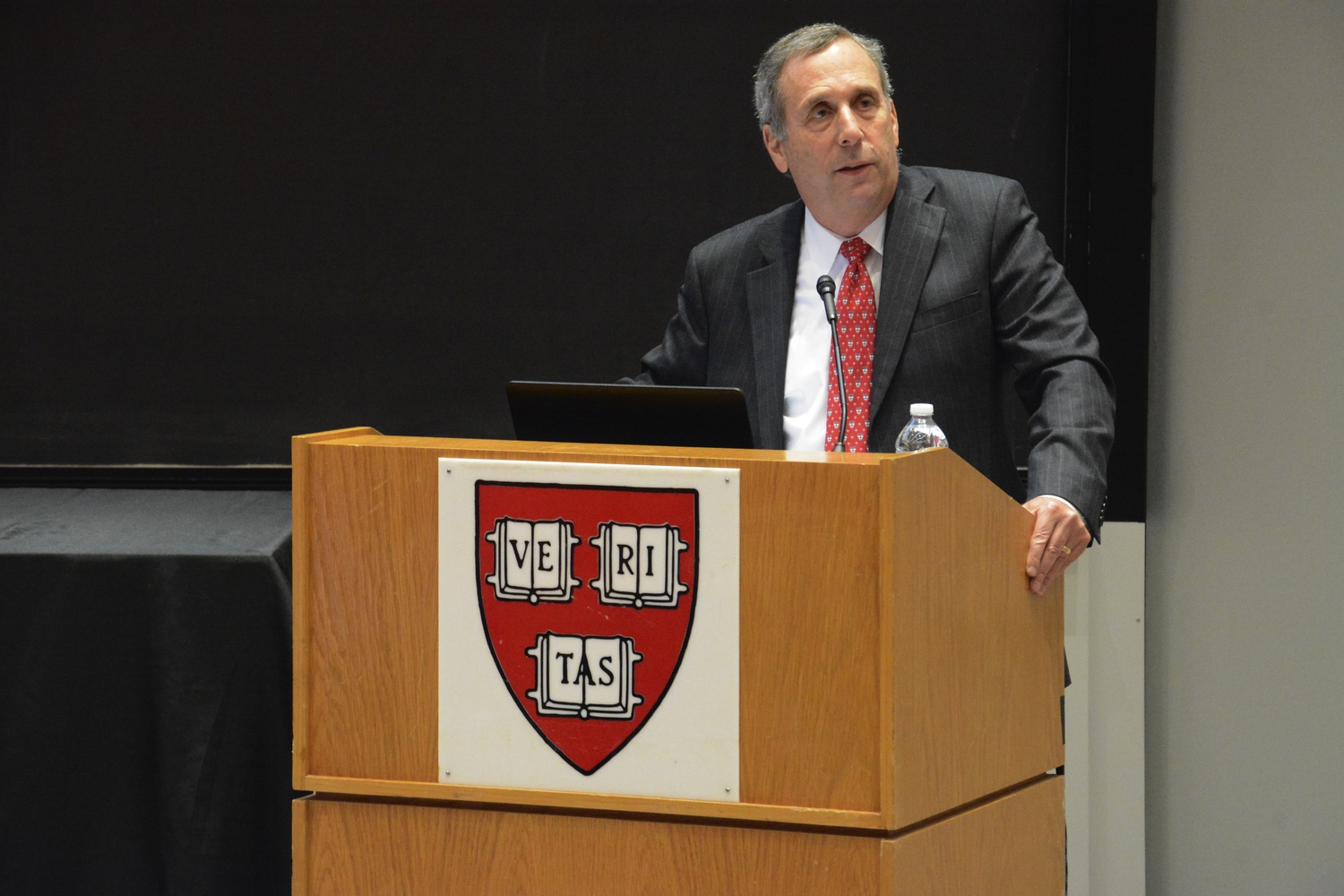 More than 50 Harvard affiliates gathered in the Science Center Thursday evening at a town hall to discuss the results of a campus-wide sexual misconduct climate survey that found incidences of sexual misconduct have remained largely unchanged over the past four years.

Several University administrators including University President Lawrence S. Bacow spoke at the event and fielded questions from student attendees. Bacow reiterated comments he made in an email accompanying the survey results Tuesday. At the time, he wrote they were “profoundly disturbing.”

“I'm profoundly saddened and disturbed that we find ourselves after five years in essentially the same position that we were before,” Bacow said. “Each individual who calls this university home should be made to feel as if they are welcome, they are free from harassment, and that this is a place where they can be their best selves.”

After Bacow concluded his remarks, he ceded the podium to Business School professor Kathleen L. McGinn, who co-chaired the steering committee that planned and analyzed the survey alongside Deputy Provost Margaret “Peggy” E. Newell. McGinn spent roughly an hour going through the survey results, at one point calling them “mind-numbing.”

The Association of American Universities administered the survey — the largest of its kind — in April. Nationwide, 180,000 students at 33 universities answered questions about harassment, stalking, and their experiences with sexual misconduct on campus. Harvard’s response rate was roughly 36 percent of the University, or 8,300 students.

The 2019 iteration of the survey came four years after its 2015 debut, when Harvard found that 31 percent of its senior undergraduate women had experienced nonconsensual sexual contact during their time at Harvard. Since then, the University Title IX Office has undergone significant changes. The Office split in two in 2017, and it implemented mandatory trainings for students, faculty, and staff in subsequent years.

The 2019 survey, however, found that Harvard’s rate of students experiencing nonconsensual sexual contact remained stagnant. While students reported feeling more knowledgeable about Title IX policies and definitions, 32 percent of undergraduate women said they had experienced unwelcome sexual contact while at Harvard. Less than half of students said they are “extremely” or “very” confident that campus officials would conduct a fair investigation based on a complaint of sexual misconduct.

McGinn highlighted other trends in the data toward the end of her presentation, noting that the majority of people who had reportedly committed sexual misconduct were themselves students. She also pointed to data showing that the majority of both survey-takers who reported misconduct and the alleged perpetrators drank alcohol before the incident in question, and that on-campus housing was the most common location for such incidents when they involved undergraduates.

During a question and answer session at the end of the evening, Newell spoke to the strategies and goals the University has moving forward — including the importance of including men in conversations about sexual assault.

“All of our committees are open. What we usually can’t do is force them to come. But we are absolutely happy to have men involved in that conversation, and we do our best to reach people of all genders,” Newell said.

Several students also asked McGinn and Newell how they would use the survey results to directly decrease sexual assault rates. McGinn responded by turning their questions back — she asked audience members for advice, input, or stories they think would help the steering committee.

“You can't create cultural change by having committees,” she said. “You have to start with community-wide conversation. That's what we're starting tonight. And I can see all of you struggling in the same way that we struggle, with what can we do to move forward?”

—Staff writer Iris M. Lewis can be reached at iris.lewis@thecrimson.com.