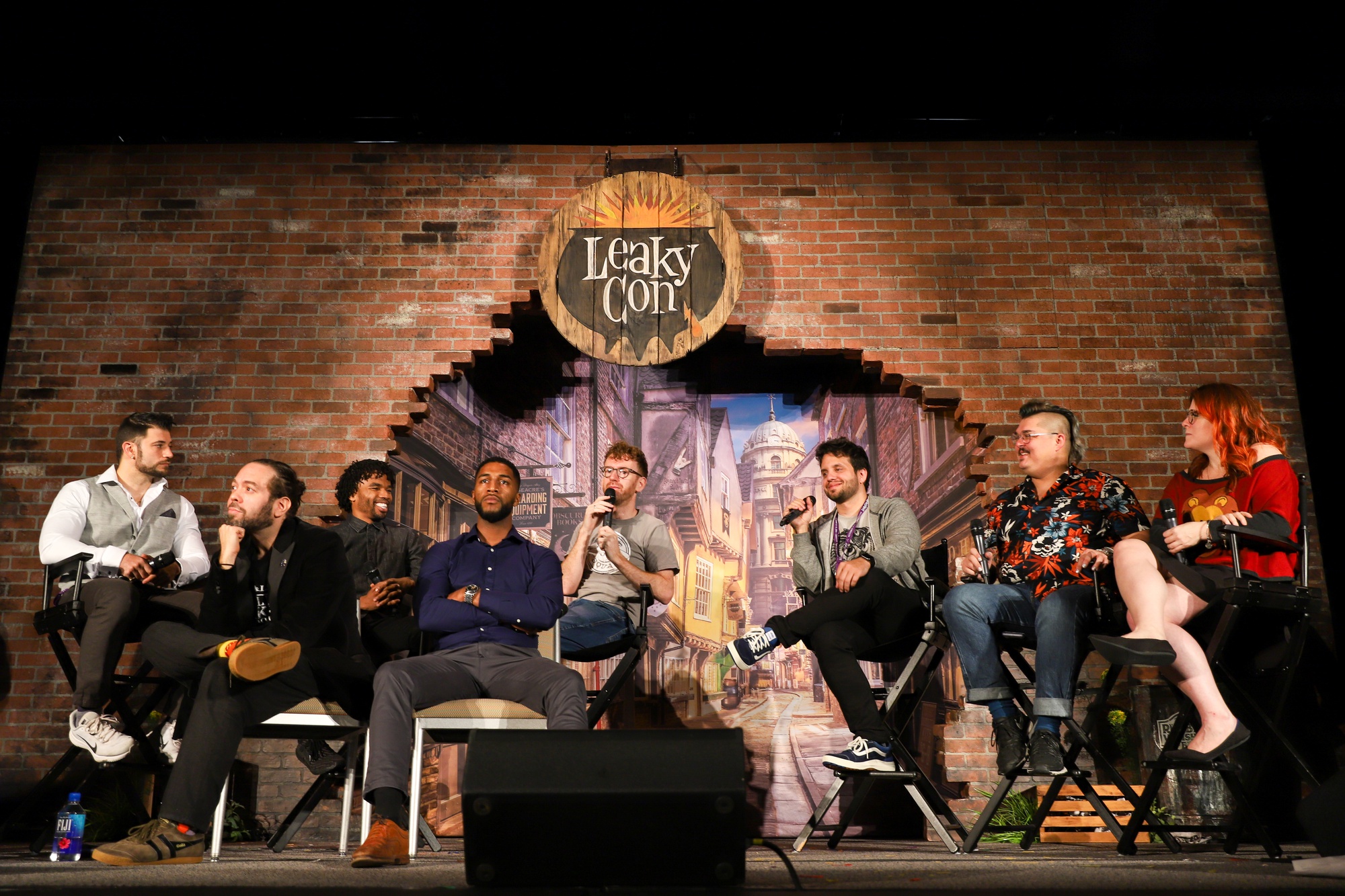 The sincerity with which the Leakycon attendees treat panels and merchandise stores alike reveals an enduring relationship to Harry Potter: a conception of the Potterdom as an evolving universe with abiding relevance to modern life.
By Rachel Chen and Luke A. Williams

More than 500 teenage Potterheads and Dobby-eared dads listen raptly to the thin, red-headed man onstage. A wannabe Luna Lovegood makes her way to the question mic. “How did you feel when Percy abandoned his family for the Ministry of Magic?” she asks. The red-headed man onstage doesn’t hesitate. It was exactly in character for Percy, he says. Percy’s always had an ambitious streak.

He should know — the man is Chris Rankin, the actor who has played and thought about Percy Weasley for more than 20 years.

It’s a Saturday morning on the second day of the tenth annual LeakyCon, a Harry Potter convention held in a different city every year. This year, the Boston Seaport Hotel and World Trade Center welcomed a flood of robe-clad, wand-brandishing fans attending panels on topics ranging from “Magizoology: an In-Depth Examination of the Care of Magical Creatures” to “An Excess of ‘Phlegm’ and the Lack of Femme.”

Beside the B-list actor panel lies the convention’s massive “Marketplace.” Like the spawn of Diagon Alley and the Minnesota State Fair, the Marketplace brims with merchants hawking their magical goods. A sweatshirt announces “I’m 100% That Witch;” heavy, wax seals bearing the crests of Hogwarts houses stand like sacred relics on cloth-covered tables; Harry Potter and Professor Snape dolls rest side-by-side in a manner that might be more than fraternal. 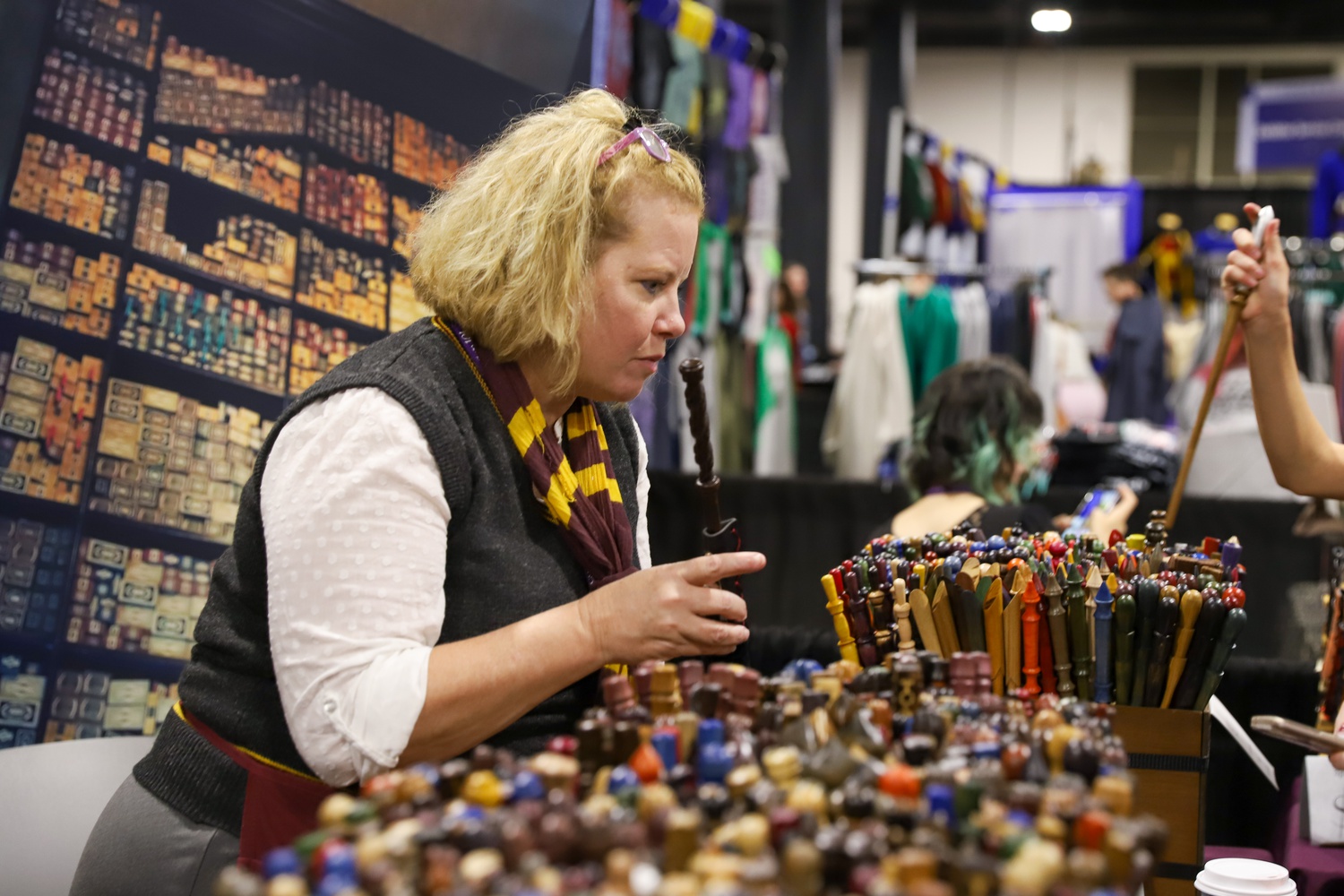 Lisa B. Laslo and her husband Greg E. Laslo opened the Hungarian Wand Shop after he carved a wand for his nephew. Their endeavour has taken them around the world selling hand-carved wands, currently attending their 9th LeakyCon. By Ryan N. Gajarawala

A mother standing with her daughter outside of the Hungarian Wand Shop sighs loudly: “Do you really need another wand?” she asks, exasperated.

She’s lucky her daughter isn’t asking to visit the nearby Windemere Wand Shop instead. While the first store sells hand-carved wands for just $25, Windermere boasts more careful craftsmanship, designing true-to-book wands down to precise combinations of wood, core, length, and style. There, a 14½ inch carved ebony wand with a core of dragon heartstring would cost her $250.

The sincerity with which the Leakycon attendees treat panels and merchandise stores alike reveals an enduring relationship to Harry Potter: a conception of the Potterdom as an evolving universe with abiding relevance to modern life. It’s integrated into the convention via inconspicuous Lizzo references and wands only adult collectors can afford. But it’s also written all over the programming in workshops that introduce twenty-first century sensibility into a world imagined two decades ago. 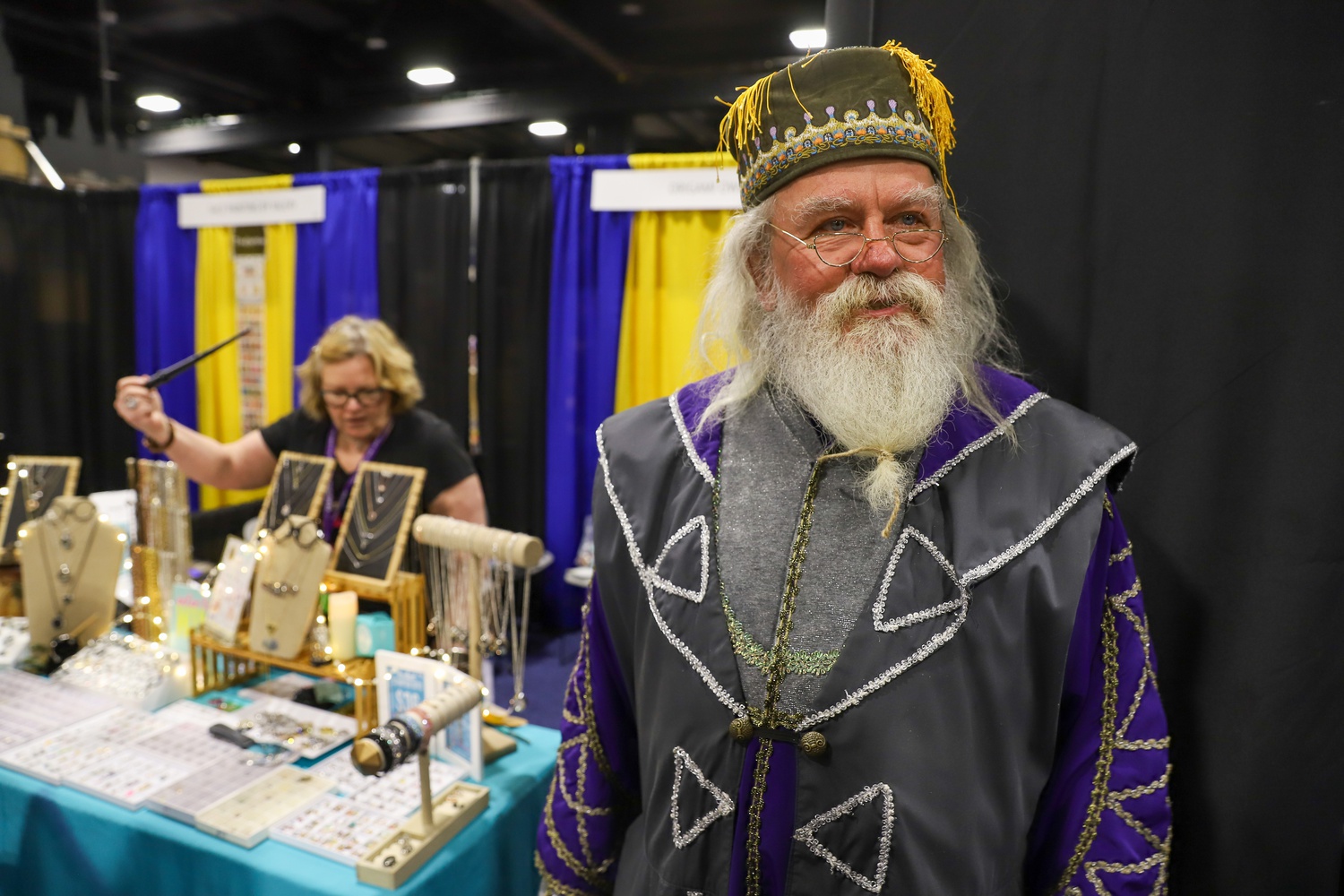 Participants at a workshop titled “Trans Magic: Gender in the Wizarding World,” conduct a serious, heartfelt discussion on the role magic would play in transitioning genders. One high-school-age attendee asks the panelists, “Would medical gender transitions be needed if you can change your appearance just using magic?” After some deliberation, the group resolves: “There’s really good precedence that transition is magically possible, but it takes a lot of skill.” In a nearby room, Rankin coaches foster-care parents on how to connect to their foster children via Harry Potter lore. Later on the docket is the “Hufflepuff Guide to Self-Care” and “Hogwarts as a Home 2.0.”

This interest in expanding beyond the conventional Potter nostalgia extends to the costumes convention-goers choose, too. Hagrids lumber past fussy Umbridges; even Moaning Myrtles flit by with toilet seats hanging from their necks. The holy trinity of Harry, Hermione, and Ron, on the other hand, are ignored by the mostly over 20-something-year-old crowd.

Dank G. Marletto is a 39-year old cosplayer dressed up as Queenie from Fantastic Beasts. Marletto has been a long-time fan, but says it was only eight years ago that he first scraped together a “hand-me-down Goodwill” costume and started attending conventions. 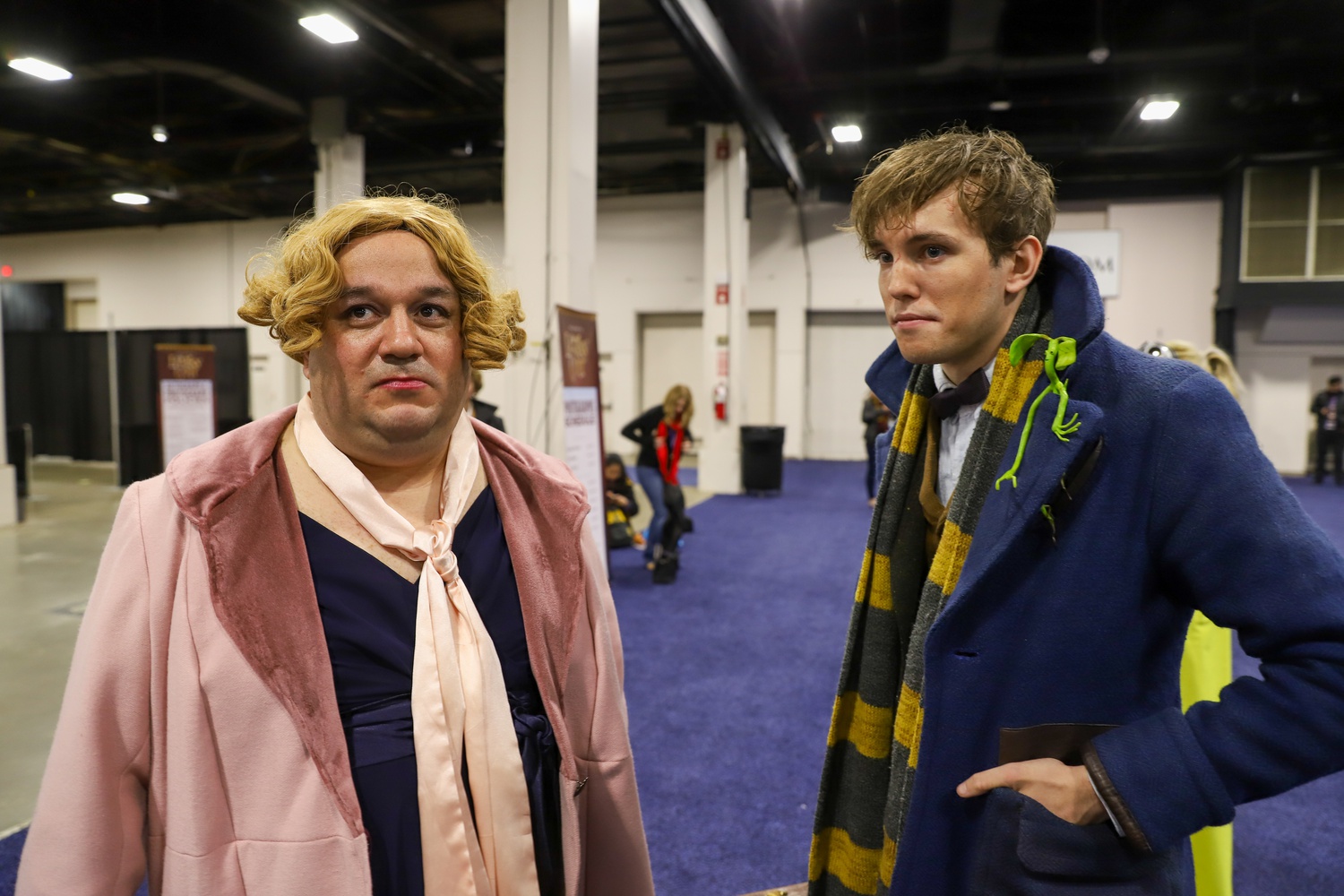 Dank G. Marletto and Jay McDougall, cosplaying as Queenie Goldstein and Newt Scamander, have attended numerous LeakyCon over the past few years, Marletto noting "Harry Potter is home. It's where I found that I just belong". By Ryan N. Gajarawala

Marletto explains the appeal of dressing as peripheral characters.

And across eight years of conventions, Marletto and his friend Jay McDougall — today, dressed in full Newt Scamander garb — agree that Harry Potter conventions have become “where the magic is,” sites of community and belonging.

“‘Harry Potter’ is family,” Marletto says. “We see each other here and we pick up like we never left off. It makes you feel like when you’re not home, you still have a home.”

This attitude seems consistent among other attendees. A group of women in their early twenties agree that Harry Potter remains a constant presence in their life via fanfiction and each other.

“‘Harry Potter’ is part of my friends circle, part of my personality, part of my morals and values,” says one of the women, Rebecca J. Dixon. To wit, the trio agreed that if they were to go out and get drunk together, they’d talk about nothing but the Boy Who Lived.

“I’ve been a fan since I was six years old,” Olivia G. Osterberg adds. “Without ‘Harry Potter’ I don’t know who I’d be.”