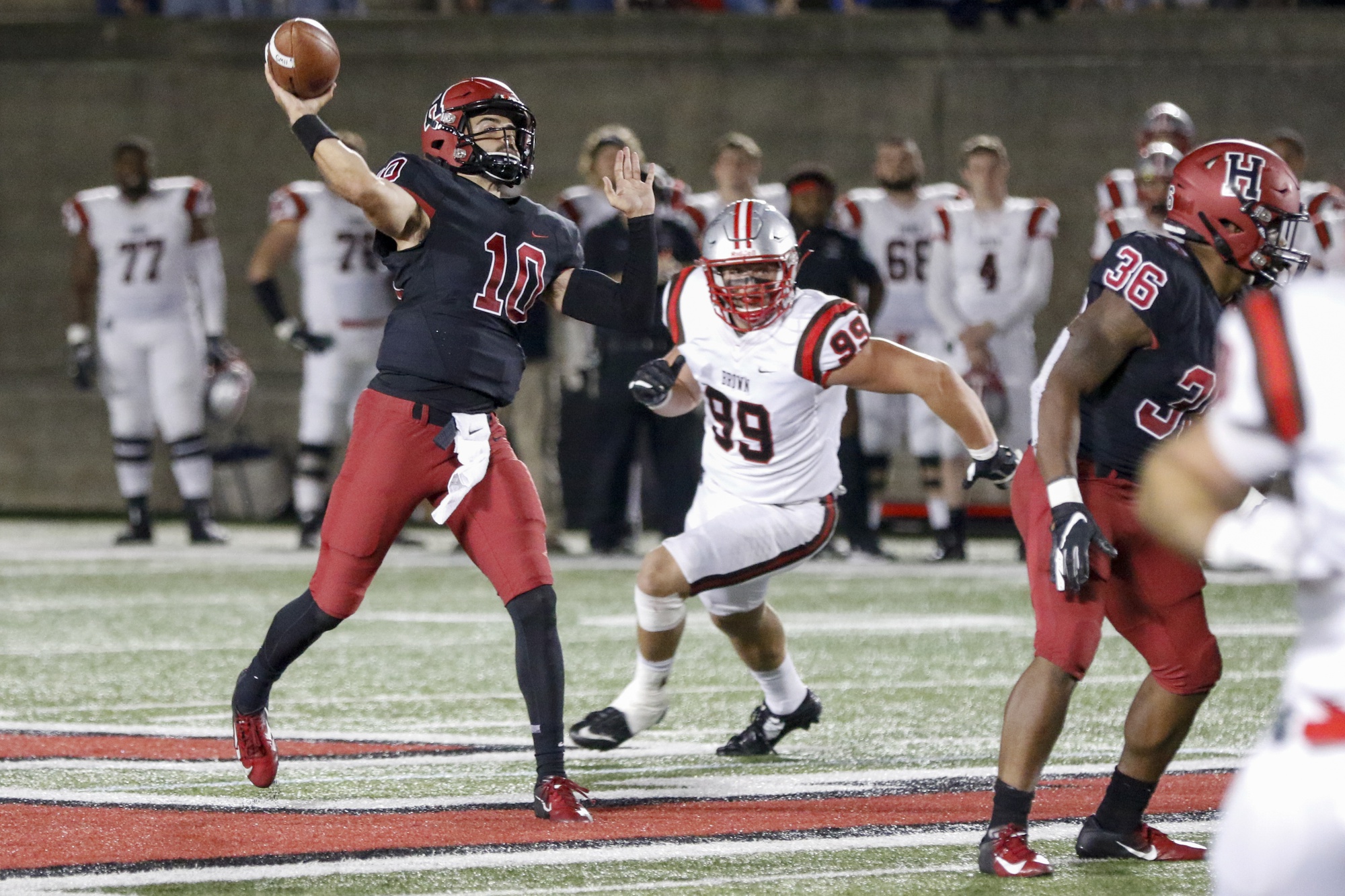 How a bear likes honey?

I wonder why he does?

-A. A. Milne, “The Complete Tales of Winnie-the-Pooh”

Within the first chapter of A. A. Milne’s “The Complete Tales of Winnie-the-Pooh,” a literary masterpiece in and of itself, America’s favorite bear finds himself caught in a peculiar predicament. Our buddy Pooh, having just heard a strange reverberating ring, struggles profusely to determine the source – and, more importantly, the meaning – of the sound. Suddenly, he exclaims that "that buzzing-noise means something. You don't get a buzzing-noise like that, just buzzing and buzzing, without its meaning something.”

This past Friday, the Brown Bears found themselves in a similar situation. Sure, though the two bears may have differed in color and intention, both were subject to a constant droning sound – Pooh to the humming of bees (to the eventual surprise of both him and his readers), and the players from Providence to the buzz of the scoreboard, a sound that echoed throughout Harvard Stadium as the Crimson brought the ball to the endzone six times.

Under the field’s Friday night lights, Harvard swamped Brown, holding the Bears to a single touchdown as they scored six of their own. However, in the musings of Winnie-the-Pooh, this sound and eventual victory must “mean something.” Well, Winnie, you’re right: here’s what we took away from this weekend’s Crimson triumph.

THE MAN, THE SMYTH, THE LEGEND

In 2017, Harvard quarterback Jake Smith became the first freshman to start at that position in over a decade. In the years that followed, Smith’s relationship with the starting slot became a little more rocky – the Ithaca, Mich., native completed only four touchdowns over the course of his sophomore year.

This season, however, seems to be different for Smith. The junior matched his sophomore-year points total over the course of the Brown game alone, throwing for a career-best four touchdowns. Halfway through the third-quarter, Smith, trapped in the pocket, launched a 34-yard, endzone-bound bomb to receiver BJ Watson, cementing his record, the game, and the title of Comeback Kid.

“It’s exciting when you set a personal record, but I’m not nearly as excited about that as coming out here in a home game with a strong W,” Smith said. “I love how the team responded and I can’t wait to continue the season.”

In travelling from one bookend of America to the other, Harvard not only changed time zones, but it returned home – a much needed location-swap for the competitors in crimson. The difference in Harvard’s gameplay wasn’t all that evident in the first fifteen minutes of its contest against the Bears, but the latter three quarters saw a much more aggressive team. Crimson coach Tim Murphy cites his staff as some of the main players in propelling that change.

“The first half of our first quarter was very similar to our first quarter against San Diego,” Murphy said. “We struggled a bit out of the gate, but I thought our coaches did a great job getting us doing what we needed to do.”

The Crimson’s late-game aggression could be seen in the squad’s third-down strategy, as Harvard’s performance on the endzone-front was matched by the quality of its late-in-the-drive executions. On 9-of-13 conversion attempts, the Crimson gained the first-down. Compare this to 3-for-11 on the side of the Bears.

It was clear throughout the game that Murphy was playing to win, with his team’s five second-half touchdowns completely unmatched by its competitors. This trend is bound to continue in coming contests. After this victory, Murphy is only five games away from setting the record for all-time Ivy League wins.

THE (MANY, MANY) NAMES OF THE GAME

As the ancient song goes, ten Thousand Men of Harvard want victory today; for they know that ov'r old Eli, fair Harvard holds sway. Now, the Crimson may not boast a count of competitors that hits the quintuple-digits, and I’m not exactly sure who Old Eli is, but based on this weekend’s receiving stats, there are certainly quite a few Harvard men who “want victory today.”

Jake Smith may have been the star of the Crimson’s contest against the Bears, but his receiving corps certainly garnered a few honorable mentions. Each of Harvard’s six touchdowns was tabbed by a different man, making for quite the versatile offense.

With a minute left in the first quarter, senior receiver Cody Chrest nabbed a 12-yard pass from Smith. Upperclassmen Jack Cook and Adam West cooked up the perfect storm in the second quarter, easily tripling the Crimson’s point total.

The next fifteen minutes saw the train of triumph speed, with running back BJ Watson snagging a touchdown pass. In the final quarter of the contest, the Crimson traded its gloves for cleats, albeit for the same results – running backs Devin Darrington and Aidan Borguet took a pair of tumbles into the endzone.

— Staff writer James Joyce can be reached at james.joyce@thecrimson.com.