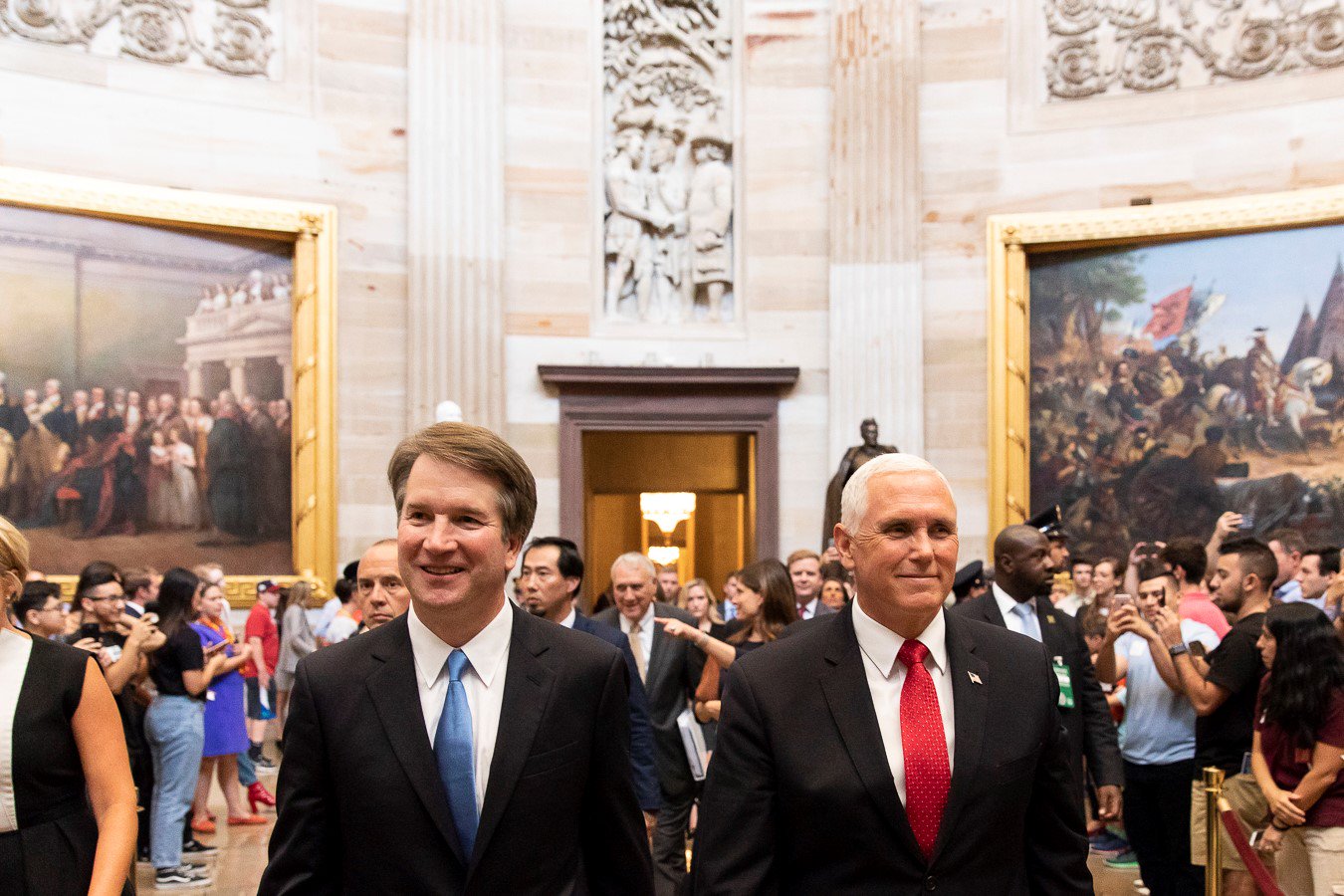 Some Harvard Law students are calling on the school to bar Brett Kavanaugh from teaching until a "full and fair investigation" is conducted into Christine Blasey Ford's allegations that he sexually assaulted her. By Courtesy of Wikimedia Commons
By Aidan F. Ryan, Crimson Staff Writer

Some Harvard Law School students are urging the school to bar Supreme Court nominee Brett Kavanaugh from returning to campus to teach this winter unless “a full and fair investigation” is conducted into allegations of sexual assault brought against him by a California professor.

Kavanaugh, who currently serves as a lecturer on law at Harvard Law School, is slated to teach a course titled “The Supreme Court since 2005” during the winter 2019 term. He skyrocketed to national name recognition over the summer after President Donald Trump nominated the long-time U.S. Court of Appeals judge and D.C.-area resident to fill the Supreme Court seat left vacant by the retirement of Anthony Kennedy.

Kavanaugh’s confirmation seemed all but certain until Palo Alto-based psychology professor Christine Blasey Ford sent a private letter to Sen. Dianne Feinstein (D-Calif.) in July alleging that Kavanaugh had sexually assaulted her at an alcohol-fueled party held over three decades ago, when both were in high school. Over the next few weeks, details of the letter leaked in the national press, eventually spurring Ford to put her name to the allegations in an interview with the Washington Post.

Ford told the Post that Kavanaugh — “stumbling drunk” at the time — pinned her to a bed, attempted to remove her clothes, and covered her mouth when she tried to scream to alert others to her plight. She said she was able to escape before anything else occurred. Ford has indicated via her lawyers that she is willing to testify regarding her accusations before the Senate next week, though she hopes the FBI will open an investigation into Kavanaugh first.

Kavanaugh, who has vehemently and repeatedly denied Ford’s accusations, has promised he will testify about the incident in a high-stakes hearing on Monday.

The students wrote that they want to know whether the Law School will “take seriously the credible allegation of Kavanaugh’s sexual assault against a young woman before he is allowed to continue teaching young women.” The piece also notes that Kavanaugh was paid “$27,490 for 9 days of teaching” in 2017.

Law School spokespersons did not respond to requests for comment.

Kavanaugh first started teaching at the Law School about a decade ago when he was hired by then-Dean Elena Kagan, who now sits on the Supreme Court. From 2008 to 2015, Kavanaugh taught a class on the separation of powers. Since 2014, he has taught a course on the modern Supreme Court — the same class he is supposed to teach this winter.

Kavanaugh’s course is supposed to take place during the Law School’s winter term, a special three-week session of classes held in January. Every J.D. student is required to complete three winter terms before graduation.

The Law Record article links to a copy of Kavanaugh’s 2017 financial disclosure report published by the Center for Responsive Politics. Kavanaugh recorded the $27,490 figure under the “Non-Investment Income” section. The salary from Harvard Law School was Kavanaugh’s only reported income on the form.

The students further criticized the Law School’s failure to respond publicly to Ford’s allegations against Kavanaugh.

“The administration diminishes women’s access to education when they fail to address allegations of abuse,” the students wrote.

The four authors of the piece are all members of the Pipeline Parity Project, a student advocacy group that aims to end harassment and discrimination in the legal field.

In an email, Coleman wrote that the opinion piece “came from the organizing efforts of the Pipeline Parity Project.” She wrote the group will wait until after the hearings next week before pursuing further activism around the issue — including possible discussions with Law School administrators.

“We're waiting to see how the next week plays out, especially in regards to steps taken (or not taken) by the Senate before we decide on where we go from here,” Coleman wrote.

Pipeline Parity has already plotted out ways to stand with Ford. The group plans to distribute buttons reading “I Believe Christine Blasey Ford” around campus over the weekend — buttons that mirror those worn by supporters of Anita Hill when she testified in 1991 hearings regarding her allegations that then-Supreme Court nominee Clarence Thomas had sexually harassed her.

Members of Pipeline Parity had originally planned to host an all-day viewing of Monday’s confirmation hearing in Lewis Hall — but that watch party is now “up in the air,” Coleman wrote.

“[W]e’re following the Judiciary Committee’s actions, and will adjust our plans accordingly,” she wrote.

This is not the first time Law School students have waded into the national debate over Kavanaugh’s candidacy.

Over the summer, students at the school circulated at least two letters — one praising Kavanaugh’s character and one opposing his nomination. Kavanaugh’s former students authored the first letter, in which they dubbed the nominee “a rigorous thinker, a devoted teacher, and a gracious person.”

The second letter, by contrast, stated that “many members of the Harvard community staunchly oppose [Kavanaugh’s] nomination to the most powerful bench in the country.”

At the time, Law School Dean John F. Manning ’82 congratulated Kavanaugh on his nomination in a statement posted on the Law School’s website.

“An inspiring teacher and mentor, Judge Kavanaugh has somehow always found extra time for his students, whether to dig deeper into important legal questions or to offer valuable career advice,” Manning said in the statement. “Let me take this occasion to thank Judge Kavanaugh for the generosity, dedication, and collegiality he has shown our community.”

Manning has not commented publicly on Kavanaugh since Ford’s allegations surfaced last week.

A previous version of this article misspelled the name of Alexandra “Vail” Kohnert-Yount.