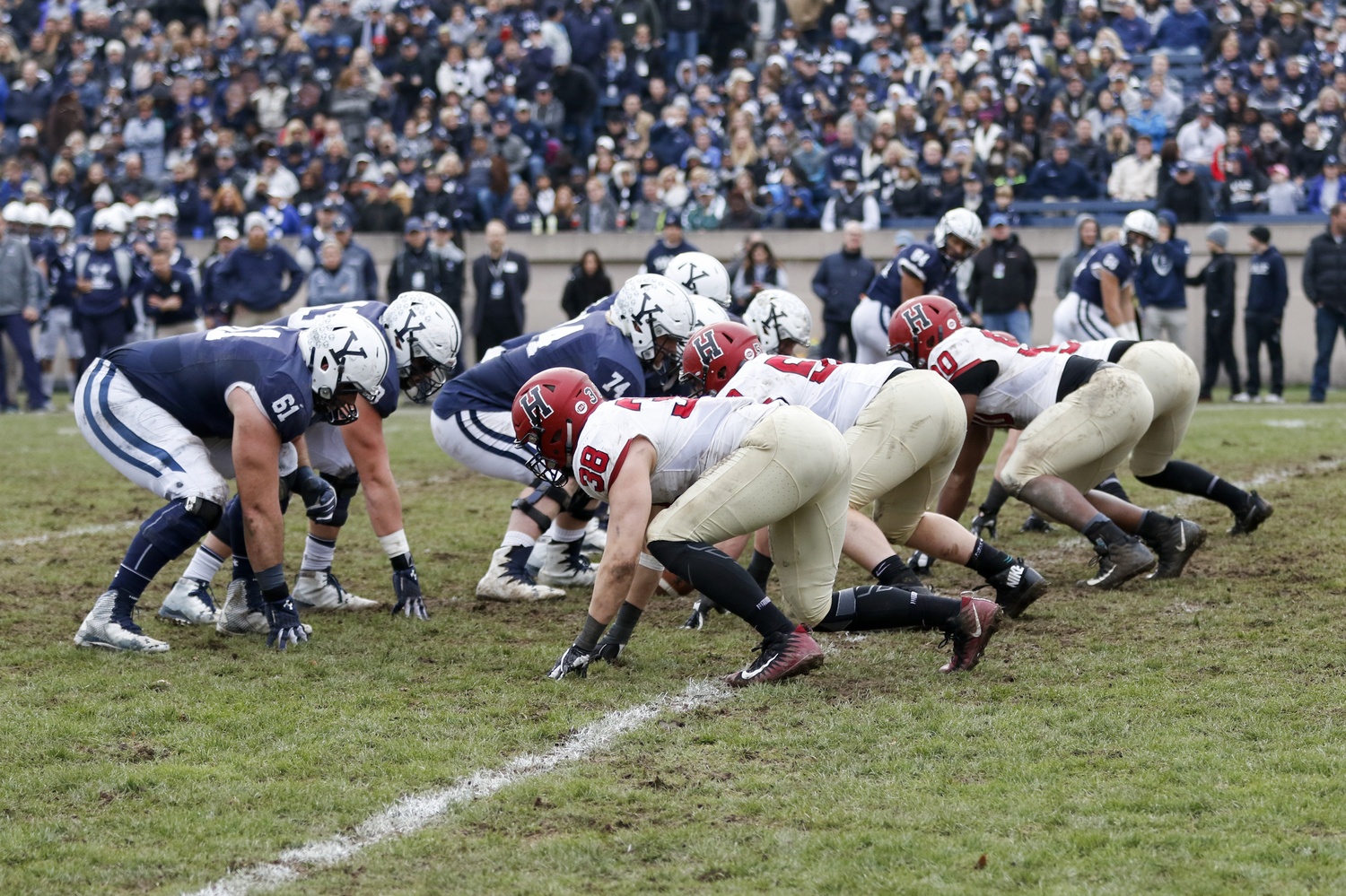 Harvard looks to recover from a 24-3 loss in the 2017 edition of The Game when it takes the field this November against Yale. By Timothy R. O'Meara
By William L. Wang, Crimson Staff Writer

Athletes with the highest or second-highest academic rating on an internal Harvard admissions scale have an acceptance rate of 83 percent—compared to 16 percent for non-athletes—according to a report from the University’s Office of Internal Research.

The report, initially meant to remain internal, was referenced by anti-affirmative action group Students for Fair Admissions in documents filed in court June 15.

SFFA is currently suing Harvard over alleged discrimination against Asian-American applicants in its admissions process. The University has repeatedly denied these claims.

Both the University and SFFA submitted expert analyses of admissions data on June 15, but the group’s respective methodologies differ on the treatment of athletes

While Card considered athletes in his analysis, Arcidiacono excluded athletes because of the different standard by which they are evaluated in comparison to non-athletes, according to SFFA’s filings.

By Ivy League Conference rules, recruited athletes are placed on a 240-point Academic Index, which is calculated based on GPA and standardized test scores. While the minimum score required for Ivy League admissions is 176, the average Academic Index for recruited athletes cannot be more than one standard deviation below the index of the previous four freshmen classes.

At Harvard, the student body index is roughly 220—approximately equivalent to a SAT score of 2200 and near 4.0 GPA, according to a 2014 Crimson report. Students who walk-on to teams are not included in the Athletic Department’s estimate.

Coaches cannot guarantee admissions spots to prospective student-athletes, whose applications must be vetted by the full 40-member admissions committee. Recruited athletes who pass this process will receive a ‘likely letter,’ indicating the applicant is likely to be admitted by the University.

He wrote in his analysis that he removed athletes from his statistical analyses to allow “comparison of similarly situated candidates” and to create “better analysis of the role that racial preferences are playing in the admissions process.”

“The expanded dataset includes all domestic first-year applicants with complete applications and data except for recruited athletes,” a SFFA’s filing reads. “Arcidiacono excludes athletes from the expanded dataset because their extraordinary admission rate demonstrates that the admissions process for this group is very different.”

In contrast, Card included recruited athletes in his study. In the University’s filings, Card argued that because all applicants go through the admissions committee, recruited athletes should not be excluded from statistical analyses.

“First, as a general matter, Harvard compares all of its applicants in each year to all other applicants in the pool for that year; it does not conduct separate admissions processes for discrete subsets of the pool,” Card wrote. “The fact that some candidates with particular attributes (such as lineage applicants or recruited athletes) have a higher likelihood of admission does not mean that they should be completely excluded from the analysis.”

College admissions consultant Zaragoza A. Guerra said that while participation in athletics can demonstrate valued soft skills— such as the ability to work in a team— involvement in athletics alone does not give applicants a clear advantage because colleges consider far many more factors, such as other extracurricular involvements.

Because of the multi-faceted approach to reviewing candidates, SFFA’s omission of recruited athletes in their dataset may prove “inconclusive,” Guerra added.

“If athletics was one of the several factors that Harvard considered, then why remove those students from your dataset?” Guerra, who was an admissions officer at MIT and the Boston Conservatory, said. “I think all students should be considered. All students have identities, such as racial and ethnic backgrounds that go beyond whether they are legacy students, whether they are recruited athletes, academics, or musicians.”

While the court could forgo a trial by deciding all or parts of the case with a summary judgement, a trial is scheduled for Oct. 15.