Disrupting the Dynasty: Upset of the Year, Runner-Up

The men's volleyball team had only ever beaten Penn State once in the 30-year history of the matchup. The 2018 squad reversed the trend.
By Cade Palmer 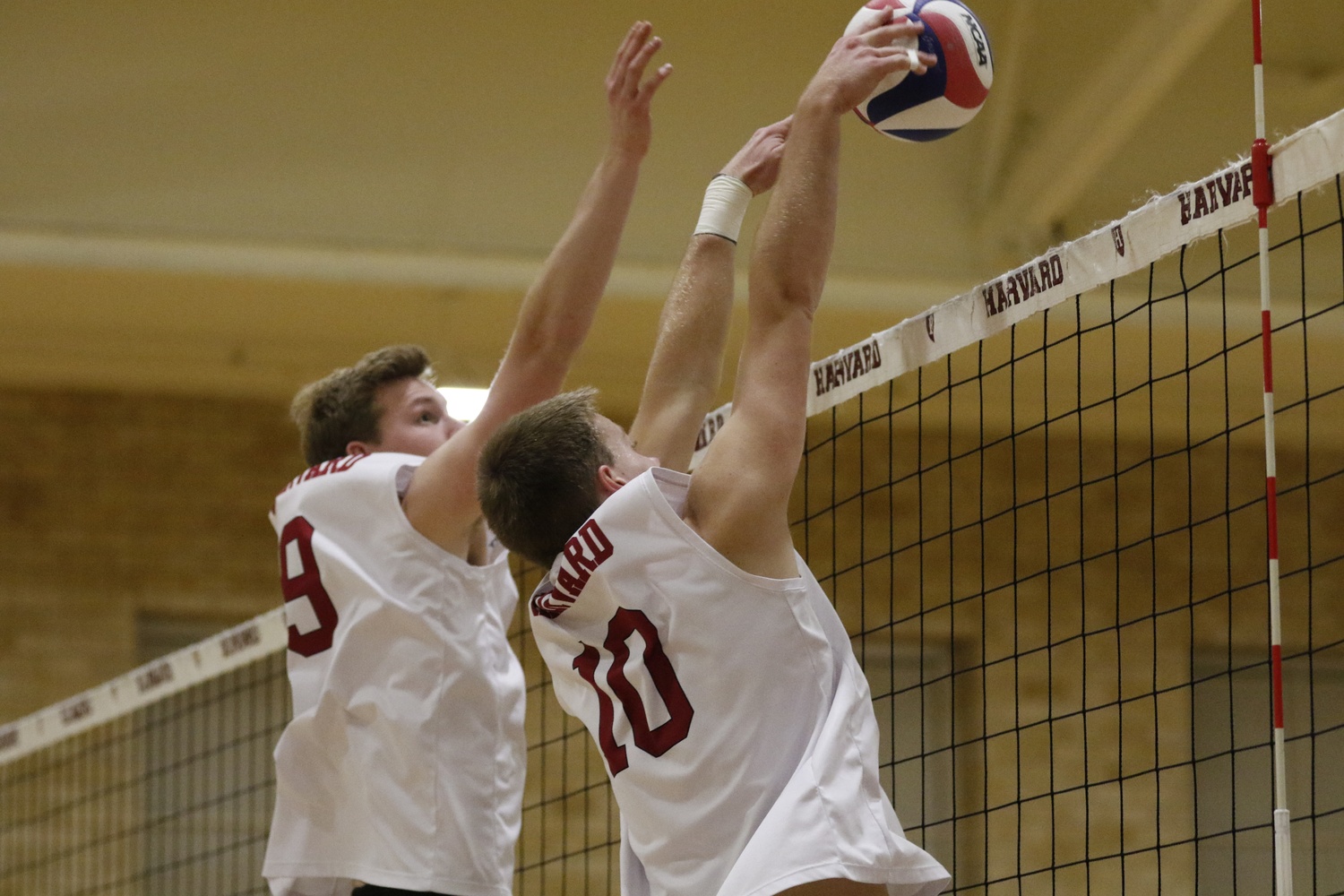 Sophomore setter Matthew Ctvrtlik and co-captain Riley Moore team up for a block on the net. Overall, the team registered 224 blocks throughout the season. By Timothy R. O'Meara

With an undergraduate student population over six times larger than Harvard’s and the capability to offer athletic scholarships, Penn State doesn’t ostensibly belong in the same Division I conference as the Crimson. But in men’s volleyball it is, and for 30 near-consecutive years, the Nittany Lions have beat up on their division rival.

It’s not just Harvard that Penn State has dominated. The Nittany Lions have historically loomed over the entire the Eastern Intercollegiate Volleyball Association—for 11 consecutive seasons, Penn State has reigned as at least the EIVA shared regular-season champion.

Against the Crimson, the Nittany Lions’ 30-year streak—exempting one Harvard win—extended into 2018. Heading into the first match between the squads in 2018, the story was already written. The Crimson entered the matchup with a 1-7 record and Penn State boasted a match count of 5-2.

Three days after Valentine’s Day, in that first match of a season that would feature two guaranteed meetings between the squads, the Nittany Lions showed no love for Harvard, downing the conference rival in a clean three-set sweep. In that contest, the Crimson pushed the first set past the 25-point threshold, forcing Penn State to get the win in 28 points. After that, the Nittany Lions won the next two sets by 11 and seven points, respectively. The showing indicated that 2018 might be a season like all the rest, another year of Penn State hegemony.

But Harvard started to turn things around.

By the time the Crimson lined up across the net from the Nittany Lions again on the last day of March, the team possessed six consecutive conference wins and a resume that included competition against some of the nation’s top talent. This included a loss to No. 1, and the eventual national champion, Long Beach State.

Harvard's home fans showed up in full force in this second and final guaranteed matchup between the squads, leaving no seat unfilled on the fourth floor of the Malkin Athletic Center in Cambridge, Mass.

From the initial point of the first set—a kill from co-captain Riley Moore—Harvard dominated the opening round of play. Things between the two seemed pretty even until a kill by junior Trevor Dow granted the Crimson a three-point margin. Another point, a Penn State timeout, and then one more tally built a five point buffer for Harvard. A service error returned the serve to the Nittany Lions, but the Crimson did not relent for long. Dow clocked two aces—sandwiched between Penn State attack errors—to push the the Crimson lead to eight, a lead Harvard only continued to build on.

The ensuing 25-13 set win was the largest point differential in the series since the Nittany Lions bested the Crimson by the same amount in April of 2012. The win was enough to rattle Penn State, as Harvard hadn’t even tabbed a set on the team in three years.

"In the fifth set, Coach [Brian] Baise put it on the seniors to make sure we pulled through and got this victory for the team. I think we took that confidence he put in us and used it to finish out the match," co-captain Riley Moore said.

“In the fifth set, Coach [Brian] Baise put it on the seniors to make sure we pulled through and got this victory for the team,” Moore said. “I think we took that confidence he put in us and used it to finish out the match.”

In the opening of set two, propelled by five kills, the visiting squad pushed into an early 7-4 lead. But the Crimson was still on fire, and a kill by Brad Gretsch followed by two Nittany Lions attack errors moved the score back to a level seven. From there, the entire set proceeded as evenly as it possibly could. The fat lady didn’t sing until Harvard reached 32, finally securing its second set win.

Two clean set wins by Penn State pushed the affair into its fifth and final set. Initially tied at 6-6, the Crimson pushed ahead with five of the next six points to secure the set and match win—the second in 30 years. 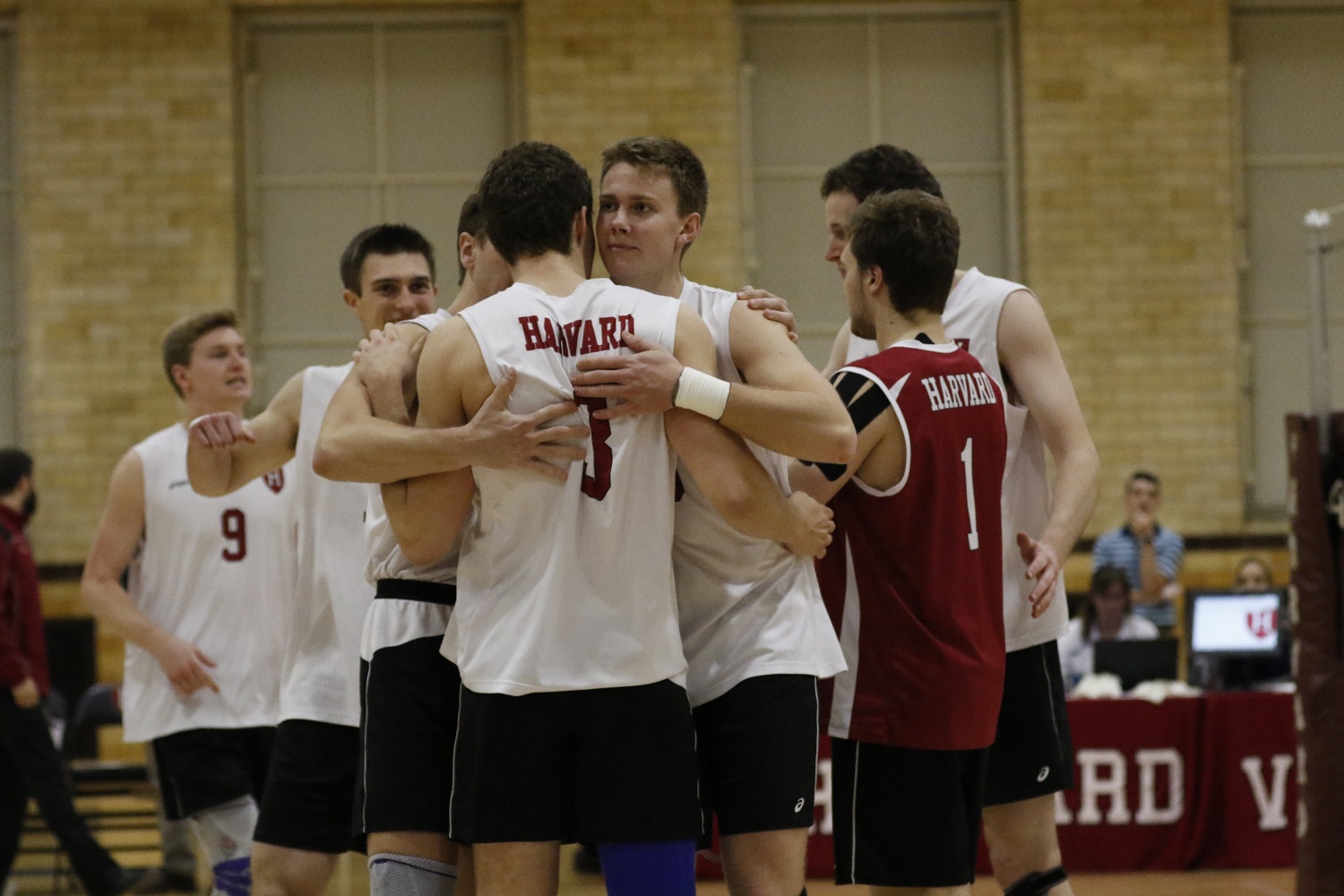 Harvard went just 13-14 on the season, but it recorded an impressive 10-4 conference record. By Timothy R. O'Meara

“I thought our guys did a really good job,” Harvard coach Brian Baise said. “To come up with a win like that, under pressure, shows a lot.”

The Crimson dominated in blocks against the tall team, clocking 11.5 blocks to the visitor’s 4.5. Meanwhile, Dow led the match with seven individual stops at the net. Harvard found further success in the defensive court with sophomore Matt Ctvrtlik claiming a team-high 10. Moore led the team in kills with 14.

With the win, the Crimson claimed sole possession of second place within the EIVA and earned the opportunity to win the division in the regular season. More importantly, it completely removed the Nittany Lions from contention, ultimately soiling its streak atop the division.

Harvard ultimately moved on to win the EIVA tournament and advance to the NCAA tournament for the first time in program history.

“This win meant a ton to our team, as it validated all of the hard work we had put in and gives us confidence as we head towards playoffs that we can compete with the best teams,” Moore said. “It was also a very special win for the seniors… and being able to do it at home in front of family and friends made it even more special.”