The Age of the Corporation

On Nov. 7, 2017, the Faculty of the Arts and Sciences gathered in Science Center Hall B, a 492-seat lecture space usually reserved for the largest undergraduate courses on campus.

But the most contested topic on the agenda was not academic—instead, the Faculty were once again discussing the College’s single-gender social organizations.

Nearly two years before, Harvard had debuted a series of penalties that barred undergraduate members of single-gender final clubs and Greek organizations—starting with the Class of 2021—from athletic captaincies, leadership positions in recognized student groups, and College endorsements for prestigious fellowships like the Rhodes and the Marshall.

Within days of the May 2016 announcement, members of the Faculty and students began opposing the sanctions, sparking hotly contested debates that lasted months. In response to the penalties, a cohort of faculty led by former Dean of the College Harry R. Lewis ’68 drafted a faculty motion meant to kill the policy.

The November meeting kicked off with prolonged testimony from administrators. After Dean of the College Rakesh Khurana defended the sanctions, Computer Science professor Boaz Barak stood up, called for a vote, and the Faculty shot down the Lewis motion, 130-90.

The vote represented the end of organized Faculty opposition to the sanctions. Now, the penalties were in the hands of the Corporation.

“The outcome of the decision will be with the Corporation,” University President Drew G. Faust said an interview earlier that month. “The Corporation is the continuing presence of governance at Harvard, and that will make for continuity.”

By the time the next Faculty meeting rolled around in December, the Corporation had decisively stepped in. At that meeting, Faust read a statement announcing the body had voted to keep the May 2016 sanctions. The decision came amid a search for Harvard’s next president; the vote effectively committed Faust’s successor—announced in February as Corporation member Lawrence S. Bacow—to the policy once he takes office in July.

The Corporation’s intervention marked an unusual foray into undergraduate social life from a body typically charged with managing high-level University decisions. With the vote, the Corporation seemed to break—once and for all—from the historical precedent that the Faculty primarily govern student affairs.

As the aftershocks of the Corporation’s decision continue to reverberate through campus, and as a former Corporation member prepares to take Harvard’s top job, some wonder whether the University is entering a new era: the age of the Corporation.

The Harvard Corporation—the Western Hemisphere’s oldest corporation—has helmed the University for nearly four centuries. Oft-criticized for its insularity and opacity, the Corporation undertook a number of reforms in 2010, expanding its size from seven to 12 members in addition to the University president.

The 13-member Corporation—whose members include lawyers, business executives, and former higher education leaders—meets seven or eight times during the academic year and holds an annual summer retreat in Cape Cod. Much of the Corporation’s job consists of managing University affairs through subcommittees. 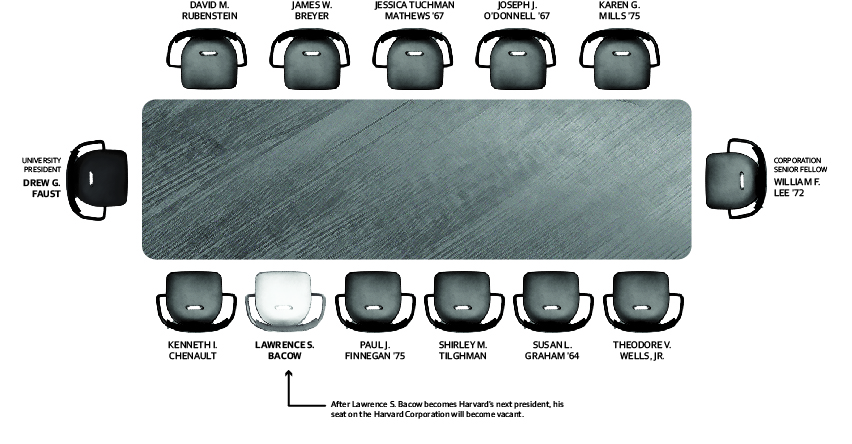 “We don’t tend to get into the details of student life routinely, but we have several times, and we are responsible overall for the health and welfare of the University in the broadest fiduciary sense,” she said in an April 2017 interview.

Still, over the course of at least the past century, the Corporation has often left decisions on undergraduate life to the Faculty. The controversy over the Reserve Officers’ Training Corps during the Vietnam War forms one example.

In 1969, tensions on Harvard’s campus around the war reached a climax. ROTC, which trains and provides financial aid to commissioned U.S. military officers, drew ire from Harvard students and faculty alike for its connection the war efforts.

The Corporation held a number of meetings around the issue at the time, but remained relatively quiet on the subject.

Instead, the Faculty acted. Professors voted 207-125 in Feb. 1969 to withdraw academic credit from all ROTC courses at Harvard and to strip ROTC staff officers from their professorships.

Though then-University President Nathan M. Pusey wrote in the 1969-1970 presidential report that the Corporation “differed at important points from that of the Faculty,” the Corporation nonetheless approved the Faculty’s request. Though the Corporation unsuccessfully tried to negotiate new contracts with the U.S. Defense Department to keep ROTC units on campus, the Faculty continued to work to minimize ROTC’s presence.

Days after 300 students stormed Pusey’s home at midnight and tacked demands “to abolish ROTC immediately” to his door, the Faculty answered by overwhelmingly voting to reduce ROTC to an extracurricular.

In the President’s report, Pusey wrote that it was “difficult” for him to “explain the fierceness and the sense of haste which the Faculty of Arts and Sciences showed” in dealing with the ROTC issue.

The FAS decision held for more than four decades, until the University signed an agreement in 2011 to formally recognize Naval ROTC and to reinstall the program.

‘THE UNIVERSITY MUST ACT’

On the surface, the Corporation and the Faculty seem to agree more on the sanctions than they did on ROTC.

The Crimson’s April survey of the Faculty of Arts and Sciences revealed 55 percent of respondents indicated they support Harvard’s attempts to regulate undergraduate social life.

In the wake of the Corporation’s decision, some professors have charged the vote represents a deviation from Faculty’s proper role governing student life.

Frederick H. Abernathy, a professor emeritus in Mechanical Engineering, said policies relating to the College have typically been dictated by the FAS. He noted faculties and students across the University vary widely in age and that students are at “different stages of their life.”

“I think it would be wiser to leave social questions to Faculty members and not make everything uniform,” Abernathy said. “There’s a difference in age in the people at the Business School, the Law School, and the undergraduate College. They’re at different stages of their life, and the Houses supposedly offer supervision or help for people. I think, myself, the Corporation ought to stay out of that.”

In the Corporation’s December statement announcing its decision on the sanctions, Faust and Corporation Senior Fellow William F. Lee ’72 defended the body’s involvement in the social group policy.

“First, the University must act,” Faust and Lee wrote. “The final clubs in particular are a product of another era, a time when Harvard’s student body was all male, culturally homogenous, and overwhelmingly white and affluent. Our student body today is significantly different.”

Faust and Lee also wrote that “non-academic” needs fall under the purview of the Corporation, especially amid a presidential transition.

“Finally, and perhaps most importantly, the decision speaks to the responsibility of the University to meet the non-academic needs of its student body and to define the fundamental character of the College itself,” the two wrote.

“Each of these considerations implicates the fiduciary responsibilities of the board—all the more so, at this moment of presidential transition, when the community has an interest in being assured that the decision announced today is not contingent on the occupant of Massachusetts Hall.”

John E. Dowling, a Molecular and Cellular Biology professor who served as Faculty Dean of Leverett House for 17 years along with his wife, Judy, said he has seen faculty members become less involved in College decisions throughout the years.

Dowling, who called the increase in the size of the Corporation a “good thing” and “needed,” said he was surprised the body voted on the single-gender social organizations policy.

“It seems to me that such policies should be the province of the Faculty, led especially by the faculty deans in charge of the Houses,” Dowling said. “Do Corporation members really know about social life at Harvard, the role of the Houses and of the single-gender social organizations?”

Lyon College president and higher education expert W. Joseph King, who has published a number of books on higher ed governance, said it is “relatively rare” for University boards to intercede on matters of undergraduate social policy.

“You can argue that diversity is of strong importance to fulfilling the academic mission and therefore the faculty would want to be involved,” King said. “Also you can argue that from the governors’ board side. That’s where you get into these interesting tests of who has the authority and where it should ultimately stop.”

The Corporation’s role aside, some faculty members say the Faculty—on its own—has grown increasingly distant from undergraduate life. This decline, they say, coincides with an increase in the number of administrators at Harvard, especially at the College and in House life.

Lewis co-chaired the Committee on the Structure of Harvard College, which released an 86-page report in 1994 detailing the background and history of the College’s administration as well as recommendations to the FAS Dean for College life going forward. Lewis became Dean of the College shortly thereafter.

The 20-year-old report noted that “some may rue the loss of direct faculty involvement in the College over the last hundred years.” The report also stated “that College business has become far more technical, and a far larger management problem, than it was in the past.”

The 1994 report also noted that faculty are chosen based on their research and teaching abilities, which does not necessarily mean “that they would have effective management skills, or knowledge of personnel or budgeting, or the other talents of good administrators.” In light of the sanctions, former Mather Faculty Dean Michael D. Rosengarten—who stepped down from this post last academic year—said he supports this claim. In an interview last spring, he said not all Faculty members have a sufficient understanding of student social life.

“As far as the faculty at the University, I don’t think they have an idea what’s going on unless they’re part of the House. So most of it happens at the level of faculty deans,” he said at the time. “Some of the Faculty has no idea what’s going on in the Houses, and don’t understand the dimension of student life or the students.”

Some Faculty members, though, say they do see themselves playing the role of College administrators. These professors lament what they call their loss of the capacity to exercise or influence administrative decisions.

“Something that concerns me greatly, as a long time faculty member at Harvard, is that many of the faculty no longer feel they are involved in, or even consulted about, College or University governance—rather that the governance is now in the hands of the administration,” Dowling said.

English Professor James T. Engell ’73 said in a Faculty meeting in Dec. 2016 that the College’s social group policy “threatens a constitutional fabric” of the University.

In interviews later that month, Faust and Smith both denied that the policy threatens faculty governance. Faust said at the time that she thought Engell “kind of implied this might be the first step on a slippery slide to an erosion of Faculty rights and privileges and part of even some kind of diabolical plot to displace the Faculty’s rights.”

But Faust said the creators of the policy did not see it as “intruding on some space.” Smith said at the time it was “categorically false” that the Faculty had no input on the policy.

The sanctions took effect for the Class of 2021, and the College is moving ahead with its implementation of the policy, releasing a new plan in May that outlined the specifics of how administrators would measure compliance with the policy.

The Corporation’s decision may have put the single-gender social organizations to bed for the next five years, but the governance debate remains unresolved.

When president-elect Bacow moves into Massachusetts Hall in July, he will inherit both the sanctions and a vocal Faculty.

How will the relationship between faculty and Corporation governance change as Bacow takes the helm of the Presidency?

Lewis says the answer is still unclear: “That’s a good question, and I hope you figure it out.”