Over the course of the nineties, Harvard’s Afro-American Studies department put itself on the map primarily by increasing faculty recruitment.
By Ashley M. Cooper 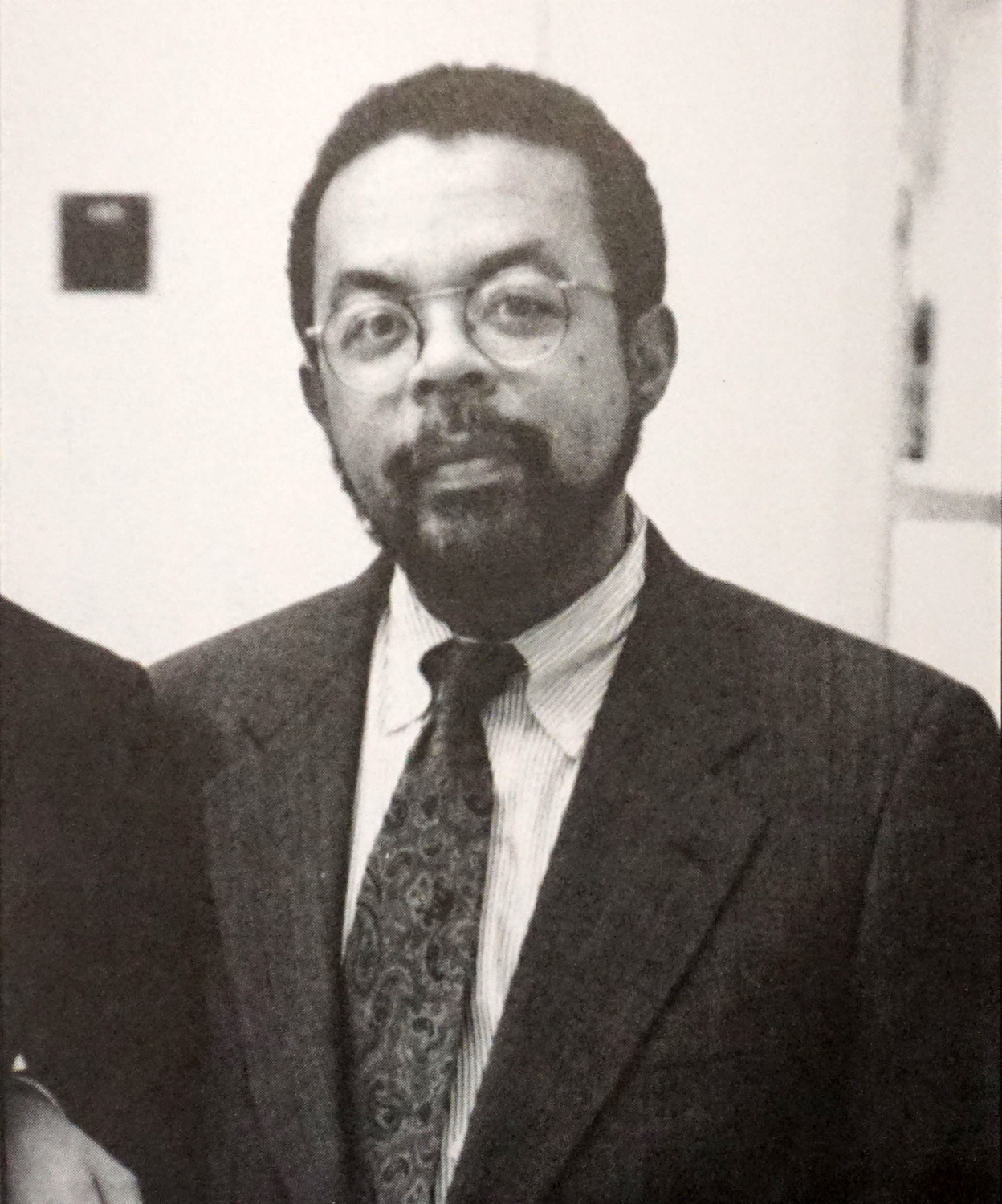 Professor Gates arrived at Harvard in 1991 and revitalized the African and African-American Studies program at Harvard. By Courtesy of Harvard Yearbook Publications

When Henry Louis “Skip” Gates Jr. arrived to serve as the new chair of what was then called the Afro-American studies department in 1991, he took on the task of rebuilding the department from one of just a single tenured faculty member and one assistant professor into a preeminent program in African and African American studies.

Catherine Clinton ’73, who concentrated in African-American studies and Sociology while at Radcliffe, was the sole assistant professor within the African American Studies prior to Gates’s arrival.

She said that during her time as a faculty member, the department faced rocky beginnings.

“There were so few of us teaching and we were gathering people from many different departments, but the curriculum of the core curriculum in African American studies needed a revision,” she said. “Gates recognized this and therefore he very quickly built a circle of scholars and teachers who established a vision that was shared.”

Over the course of the nineties, Harvard’s Afro-American Studies department put itself on the map primarily by increasing faculty recruitment.

One such recruit was Phillip Brian Harper, former Harvard Assistant Professor of English and Afro-American Studies from 1991 to 1995. Harper arrived during this critical period of revitalizing the department.

“The primary thing that occurred while I was there was that there was a very conscious infusion of energy into the department along with the arrival of Skip Gates,” Harper said. “There was an infusion of actual material resources on the part of the University, and both of those facts really contributed to the excitement and the atmosphere while I was there.”

J. Lorand Matory ’82, also began teaching at Harvard in 1991 as a jointly-appointed Professor of Anthropology and African and African American Studies.

“[Harvard] became the new capital of African and African American studies and set the standard for the sort of scholarship that would define the field from the ’90s onward,” Matory said. “One could hear journalists talking about the Dream Team at Harvard.”

This “dream team,” which included Matory, Harper, Cornel West, and other newly recruited faculty members, led to an increase in concentrators in the field. A Crimson article in May 1993 reported that the number of concentrators nearly doubled in two years to a total of 49.

With the proposal of a graduate program in the African and African American Studies in the 1996-1997 academic year, Afro-American studies became an even more established component of Harvard that could no longer be overlooked. After receiving unanimous faculty approval on Feb. 15, 2000, the graduate program was instituted at Harvard, and enrolled its first six students by the fall of 2001.

The revitalization of the department has centered around the promotion of African and African American Studies as an interdisciplinary field. Harper said this focus led to a commitment to the idea that the majority of faculty members would be jointly appointed to another department outside of AAAS, which served as “a way of enhancing and emphasizing the interdisciplinary character of the field.”

“One of the things that was most notable about Professor Gates’s leadership in my view was that he always had a very clear sense that Black Studies was, properly speaking, a profoundly interdisciplinary and multidisciplinary undertaking,” Harper said. “He wanted to make sure that we had a set of scholars on the faculty from a wide range of disciplinary backgrounds.”

This interdisciplinary viewpoint can still be observed in the department today, with nearly all faculty members in the AAAS concentration holding joint appointments.

However, this mission of multi-disciplines was not well received by all.

Molefi Kete Asante, who chairs the Temple University Department of African American Studies, said when Harvard reinvigorated its African and African American studies department, scholars in Africology, who aim to question the assumptions made by a societal Eurocentric narrative, hoped that Harvard would “contribute to the discipline.”

“I don’t think you can make the case for an African American studies department if it’s not Afrocentric and it’s not Afrological,” Asante said. “What Harvard did instead was hire outstanding individual scholars, which are very great and they’re good scholars, but they have little impact on the field of Africology.”

But to Harper, Afrocentrism can risk the oversimplification of black culture.

Students in the ’90s did have a desire for a more Afrocentric approach to the curriculum, according to Harper, and this call for increased Afrocentrism led to a greater dialogue on campus.

He added, “My sense is that the vision that Skip Gates had, which was for an approach to the field that was very wide-ranging and very expansive and very interdisciplinary, really has come to fruition.”

During the 2003-2004 school year, the department reevaluated its undergraduate curriculum, and decided to drop the Afro-American Studies Department title in favor of the newly coined Department of African and African American Studies.

“The intent behind the change of the title was to create an omnibus geographical coverage rather than one limited to the United States,” said Matory.

“We house the most extensive and successful African Language program, offering tutorials in more than 25 languages each year,” Lawrence Bobo wrote in an emailed statement.

Since the installment of the new track, students have had increased flexibility regarding what topics they will study in the concentration.

Junius O. Williams ’18, an AAAS concentrator on the African Studies track said the department is shifting towards a more extensive course listing.

“As interests in things like business and entrepreneurship, sciences and policy in Africa increased, we’re starting to see those courses being reflected in the course booklet,” Williams said.

During the 2006-2007 academic year, Evelyn B. Higginbotham, a professor of history and African American studies, prompted discussion in the department about the incorporation of the Social Engagement Initiative into curriculum, which resulted in the creation of the first AAAS social engagement senior theses in 2010.

The social engagement thesis allows students to implement a social intervention to aid people in Africa or within the African diaspora by working on a year-long project and culminating in an academic essay.

Mfundo T. Radebe ’20, an AAAS concentrator on the African Studies track is currently pursuing a social engagement thesis, and said the flexibility, as well as the academic and social engagement of the department, has led him to stay engaged in the concentration.

“I think one of the things that has consistently kept drawing me back to AAAS is that social engagement thesis, the fact that it even allows your courses to be shaped around that,” Radebe said.

Despite the new revisions to the program, some students said they still would like to see an even wider offering of courses.

Ted G. Waechter ’18, an AAAS concentrator on the African Studies track and a former Crimson editorial writer, said that there is a lack of introductory level courses within the department.

“We have been very responsive to changing social conditions and to the interests of students, though probably not as quickly as some student would have liked,” Bobo wrote. “Thus, as just two examples, we have courses wrestling with mass incarceration, as well as with matters of sexual and gender identity, and critical race theories.”

Ultimately, though, several students said they have had a positive experience within the department.

According to Bobo, the current AAAS chair, the department currently has 39 voting faculty members with departmental courses that reach approximately 1,500 Harvard students each year.

“In contrast to the early ’90s, at this time we have 75 concentrators,” Bobo wrote.

“The department... looks to me to be more diverse in terms of the number of disciplinary fields that it engages with, and it really seems to have fulfilled the objective in that regard that Skip Gates laid down when we first arrived at Harvard,” Harper said.