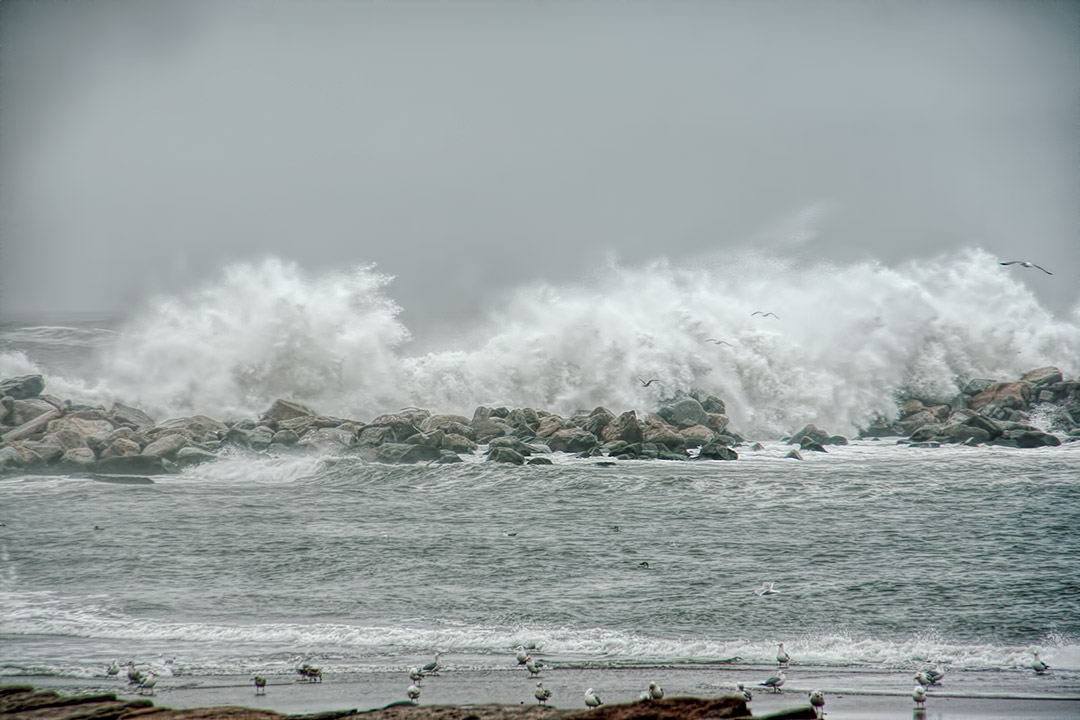 A map fills the screen, its segments divided and labeled to represent Cambridge’s neighborhoods. Dashed blue lines bleed across West Cambridge and over Fresh Pond. “This is the floodplain,” Brown adds.
By Andrew W. D. Aoyama and Elida Kocharian

Brown advances the slideshow projected behind him. A map fills the screen, its segments divided and labeled to represent Cambridge’s neighborhoods. Dashed blue lines bleed across West Cambridge and over Fresh Pond. “This is the floodplain,” Brown adds.

Sharp inhales rise from the Cantabrigian audience assembled in John M. Tobin Elementary School, which, at only four meters above sea level, sits squarely within the floodplain. These residents, most of whom are elderly and have lived in Cambridge for decades, are members of the Fresh Pond Residents’ Alliance, a group that is currently drafting a citizen’s petition to the Cambridge City Council calling on the council to better safeguard the community from the impacts of climate change. This meeting centers on that petition.

“Incursions have been made into the open space floodplain to the point where it could be at the tipping point unless we curb [development] now,” Ellen Mass, a local environmental activist, says at the neighborhood meeting. By “incursions,” she means a 299-unit apartment complex in the Belmont Uplands, partially constructed on the 15 acre Silver Maple Forest in 2015.

One of the provisions of the petition aims to instate more requirements on the acquisition of Special Permits for development on floodplains. These new requirements would make it harder to build new infrastructure on land that is prone—and almost guaranteed—to flood.

“It’s a matter of when, not if,” says Daniel P. Schrag, a Geology professor who directs the Harvard University Center for the Environment. Schrag, a climate change specialist and a former member of President Obama’s Council of Advisors for Science and Technology, predicts that rising sea levels will intensify the impact of flooding following a strong storm—unleashing unprecedented devastation across the Boston area.

“The problem is not that sea level rise will come and flood everything by itself,” Schrag clarifies. “It’s a nor’easter.” Schrag anticipates that a nor’easter could create a storm surge that tops the New Charles River Dam, flooding vulnerable neighborhoods like Back Bay, Allston, and West Cambridge. An event on the scale of Hurricane Sandy would mean “ecological devastation” for the Charles River, which would be completely inundated with saltwater, and would also destroy homes and power grids across the floodplain, he says.

Cambridge is currently protected by the Charles River Dam and the Amelia Earhart Dam on the Mystic River, which help mitigate the flooding Cambridge receives, according to John Bolduc, Environmental Planner at the Cambridge Community Development department.

“The kind of high-tide flooding you saw in Boston and elsewhere on the coast this winter did not affect Cambridge because the dams kept the water at bay,” he says, referring to the 13-foot tides that flooded over 8,000 residences in Quincy in early March. “Our studies indicate that those dams will continue to be very effective in protecting Cambridge from that kind of flooding for a few more decades, so we think it becomes a significant risk closer to mid-century.”

The Cambridge Climate Change Vulnerability Assessment, a city-sponsored initiative that seeks to identify the ways that the community will become vulnerable to climate change, states that the Alewife-Fresh Pond area is at greatest risk of storm surge flooding by 2070. The city has already taken steps to protect Fresh Pond, a drinking water reservoir, from flooding.

One such landscape improvement project involved building hummocks to shield the reservoir from the projected 2070 storm surge, according to Bolduc. Meanwhile, parts of Harvard’s campus, including the Yard, sit at a much higher elevation and are at a lesser risk of being flooded.

The city has taken steps to plan for climate change and its associated flood risks, according to Bolduc— In one example, Cambridge has developed plans to install berms in strategic locations along the Mystic River and large underground storage tanks in the Port neighborhood to reduce flooding. In another, the city is collaborating with regional climate task forces in Boston.

But for Schrag, projects like the CCVA fail to implement specific measures to protect the city from the impacts of climate change. “I’m a little frustrated, personally. In my experience, there’s a lot of planning going on, but they’re not actually doing much,” he says.

“It can take months – sometimes years – to collect necessary the technical analysis and engage the community around the City’s most pressing needs, but careful and deliberate planning is necessary for guiding the future development, growth, and resiliency of Cambridge,” Iram Farooq, Assistant City Manager for Community Development, wrote in an email.

That’s where the citizen’s petition comes in. While citywide projects like the CCVA have “studied the problem,” the petition outlines the “the concrete steps of what would actually change to yield the results that they proposed up to this point,” explains Brown, who co-authored the petition with fellow Cantabrigian Mike Nakagawa.

The citizen’s petition, titled “Zoning Amendments for a Flood and Heat Resilient Cambridge,” proposes specific amendments to improve city open space, infrastructure, and stormwater management. It expands existing zoning requirements to improve overall climate resiliency and community health and safety, according to the cover letter Brown and Nakagawa sent to the city council.

Specifically, the petition urges restricting the placement of flood barriers around properties—a move that can endanger neighboring plots of land. These raised barriers, including berms and floodwalls, effectively keep water out of the properties they surround—but at the cost of pushing water into adjacent ones. The petition proposes a system under which developers would have to seek a special permit prior to building berms and only allows berms to be built on the condition they have no adverse impact on neighboring properties.

At the meeting, one resident mentioned the perception that the petition may harm plans for developing affordable housing in Cambridge. The allegation is often raised by developers, who claim the environmentalists are motivated by a “not in my backyard” mentality to argue against affordable housing.

In response,Brown affirmed that the petition is “housing-neutral.” The petition does not restrict the amount of square footage or number of units available for housing. Rather, it is concerned with “future-proofing” the community so that affordable housing is not developed on property that will likely become flooded within a decade. “When we look at the development here, we want to make sure that it’s responsible and that going forward, it’s resilient; that we’re not, in effect, putting people in harm’s way,” says Brown.

Many residents speak about this issue in terms of winning or losing; in terms of battle. As the meeting adjourns and people file out of the school and into their Priuses, Ellen Mass insists that they’ve been on the ground for years.

Maybe it is time to get to know the water.