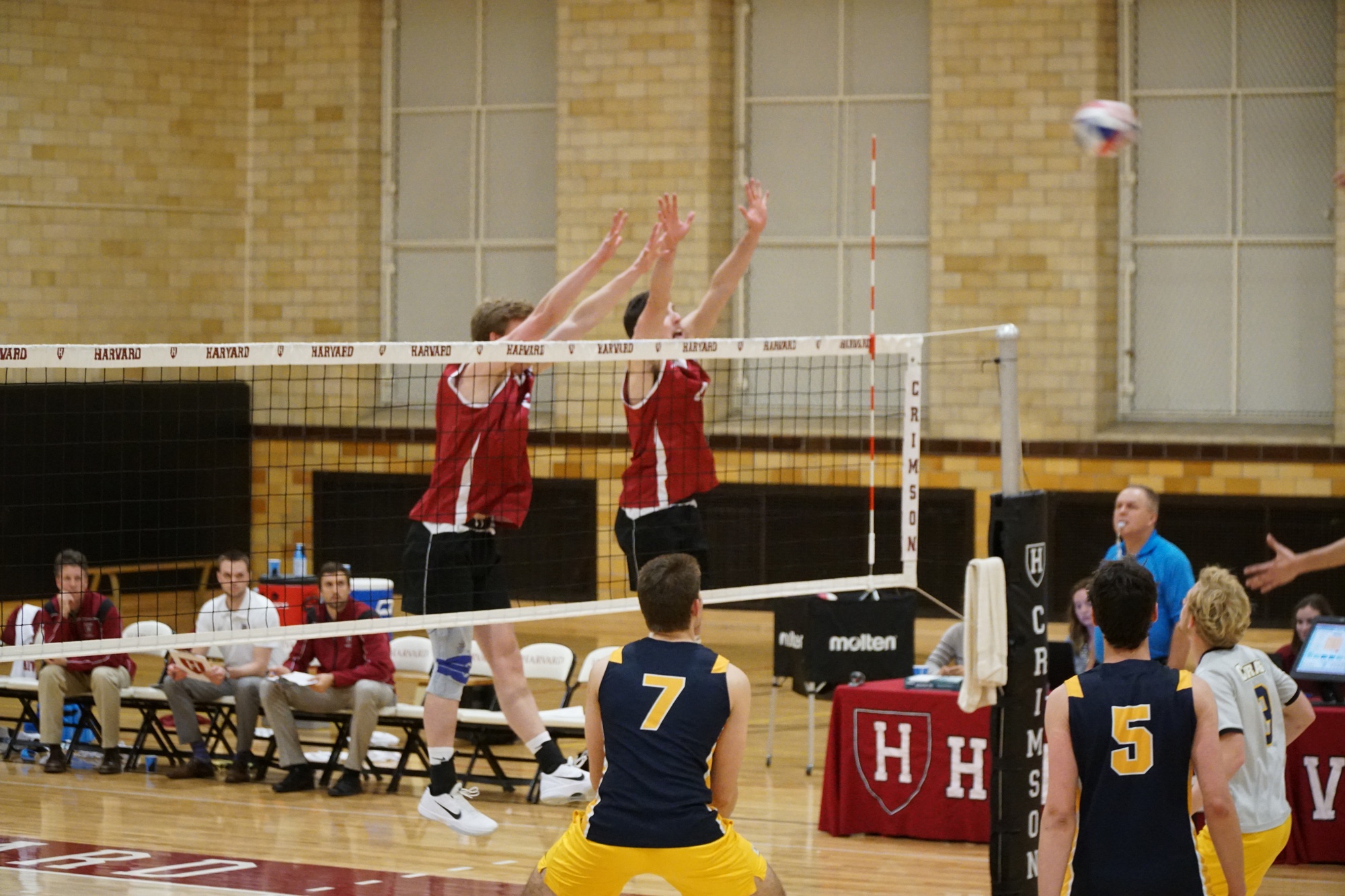 After two big wins this past weekend, the Crimson are now 8-2 in the friendly confines of the Malkin Athletic Center. For comparison, the team is 3-7 on the road and 0-2 in neutral site contests. By Ryosuke Takashima

The Harvard men’s volleyball team continued its hot streak this weekend at the Malkin Athletic Center, with two crucial victories against EIVA opponents.

The Crimson (11-11, 10-2 EIVA) extended its winning streak to six games after securing a narrow victory over conference rival Princeton (10-14, 6-6) on Friday night and then a dominant win over the New Jersey Institute of Technology (7-16, 4-8) on Saturday afternoon.

The Crimson did not drop a single set as it rolled over NJIT on Saturday afternoon. On a day when the team honored its Class of 2018 in its last regular season home game, the victory was worth much more to the team than just conference standing.

“It was really fun,” senior blocker Riley Moore said. “Especially to win like that, having all four seniors out on the court, having a couple laughs. It was really just a cool way to end the season.”

After a dominant second set, Harvard seized momentum and took control of the game. The team rolled through the third set with confidence and smiles. The Crimson took the first point with a kill by senior setter Marko Kostich and never gave up the lead, winning the set, 25-15.

The third set was critical to the team’s mentality, as closing games has become a main focus as of late.

“I thought we finished really well,” Moore said. “We’ve been up 2-0 in our last two matches and then gone to five [sets]. It was really important that we come out and finish fast. 25-15 was a great way to do that.”

Before that, Harvard had taken the second set, 25-19. The margin was capped off by a service error by Highlanders freshman setter Zachary Hresko. The crowd proceeded to erupt in cheers, feeding off the team’s excitement and anticipation for a potential straight set victory.

The first set involved more tension for the Crimson. An early 5-0 lead quickly vanished as NJIT came within two late in the set to make the the score 21-19. However, Harvard was able to close out the set with a final score of 25-21.

“Everyone’s fully invested,” Kostich said. “From freshman to seniors, they know that every practice we take extremely seriously. We work hard in the gym and off the court as well.”

Harvard is now playing with confidence, which can make it a dangerous team to face moving forward.

“It's been a mindset thing,” Moore said. “There are a lot of times we feel we’re not ready or that we don’t have it. This year the whole team is fully invested, and we know we can win this league. Everyone thinks that while we’re playing too.”

Earlier in the weekend, it took five sets to separate two Ivy rivals in a much tighter affair. Each team dominated consecutive sets with the Tigers entering the fifth set after two straight victories.

Princeton rode its momentum into this 5th set, building a 10-6 lead. The Crimson proceeded to take the next six out of seven, though, in a strong response. Harvard then went on to squeeze out the fifth set, 15-13.

The team was excited to leave the court with a victory, but was not happy about its inability to close out the contest after going up 2-0.

“I think it’s a thing you see in volleyball on and on again,” Kostich said. “ People mentally check out. They assume the third set is clutched and they stop playing. That happened to us, it just happened that we figured it out half-way through the fifth set. It wasn’t ideal, but a win is a win.”

“I think we got a little too comfortable,” Moore said. “ After winning the first two sets decisively, coming into the third we didn’t look ready to play. In the fourth they had a lot of momentum going, but we were able to rally together, bring a couple of great serves and kills and bring it back.”

The narrow victory on Friday showed both growth and ability that the team can rely on going forward.