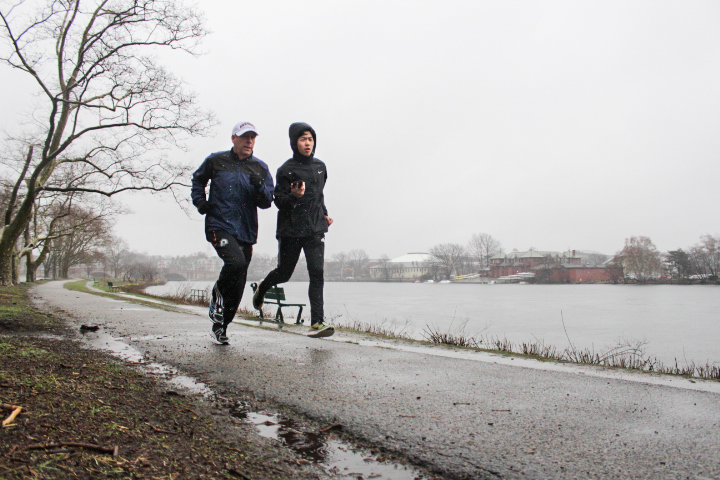 On a Run with Harvard’s Next President

Heavy rain qualifies as weather most runners would consider demoralizing. But rain plunges Bacow into a state of determination, calm, understanding, even zen.
By Luke W. Xu

Lawrence S. Bacow, president-elect of Harvard University, waits at the edge of Memorial Drive, where the cars slog along the wet pavement and punctuate the air with metallic squeals. On this Marathon Monday, it is raining and 40 degrees, which is to say the weather has been at its recent worst. Sheets of water and remorseless wind raze the riverside, saturating me, Bacow, and every living thing nearby with a damp cold.

But Bacow does not care. He shifts from foot to foot, eagerly waiting for the cars to stop so we can cross the street and begin our run. “If you’re a serious runner,” he explains, “You don’t just run when the weather’s good.”

Then there’s an opening, a break in the procession of cars so brief it would give a jaywalker doubts. Not Bacow.

“Don’t get hit,” he calls over his shoulder, and I’m off on a run with Harvard’s next president.

Heavy rain qualifies as weather most runners would consider demoralizing. But rain plunges Bacow into a state of determination, calm, understanding, even zen. (He tells me he ran his last Boston Marathon in similar weather.)

For Bacow in rain is Picasso in Paris, or Hemingway in danger: he is in his element. There is no puddle he cannot foresee, and his intuition for problem-solving exerts itself in the challenge of staying dry. He knows the right shoes (“Goretex”) and the right gear (my cotton socks are a “bad move”). And when he runs forward against the rain, taking bold, measured strides, he makes each step an act of conquest over the storm.

Once, abruptly, he yanks me back as I begin to ask a question. A car speeds by through a puddle in the street, deluging the space where I had almost landed.

“When you run in inclement weather, you learn to keep an eye out for stuff like that,” he says.

Bacow’s running career took off seriously when he was 46 years old, and subsided when he was 56. In that period, he ran five marathons, including the Boston Marathon, four separate times. He is now 66, but he trains often enough that if he “wanted to do a half marathon, it wouldn’t take much.”

I struggle to keep up with the next occupant of Massachusetts Hall, which is either a testament to his prowess or evidence of my physical ineptitude. Or both.

Bacow seems aware of this, and he checks in occasionally. “You good with this pace?” he asks. “I don’t want to run you into the ground. That wouldn’t look good!”

As one of the few people in the world who has run both a marathon and a university, Bacow reflects that there are a number of similarities between the two. To start off: “a presidency is a marathon, not a sprint.”

“You don’t have to solve every problem in the university on day one, or even in the first year. You need to understand the culture, understand the organization, understand the students, the faculty, the staff, the alumni,” he says. “Figure out what needs to be done, and then do it. So you need to pace yourself, you need to be in it for the long term.”

And he says he thinks best when he’s running.

Something tells me he’ll be running a lot during his tenure here.

When running long distance, Bacow says, he usually listens to his son’s pop music playlists. His favorite songs are still the “songs of my generation”—Simon and Garfunkel, Dylan, Bonnie Raitt. I ask him if there’s any song he’s thinking of right now. He pauses for a moment, and suggests “Singing in the Rain.” He asks if I know it, and I start the chorus, and then he joins in, and then:

“I’m singing in the rain,

Yes, singing in the rain,

What a glorious feeling,

On cue, the wind picks up, my hood flies off, and the rain comes down harder, which makes me wonder whether I’m running or swimming with Larry Bacow.

It’s an odd scene: the almost-president of Harvard and an amateur magazine writer shouting Gene Kelly into the wet abyss, but it’s representative of what Bacow became known for as president of Tufts and Chancellor of MIT—engaging with undergraduates. At Tufts, he held weekly runs with students and led a marathon team called the President’s Marathon Challenge. He also scheduled personal meetings with students who were hospitalized for alcohol-related issues.

Bacow explains that his philosophy toward students stems from his own experience as an undergraduate at MIT, where he says he had “the kind of experience I hope every college student would have.”

At MIT, Bacow sailed, played some hockey, and tried not to waste money. He joined a fraternity, albeit one whose members constituted 15 percent of MIT’s inaugural Phi Beta Kappa class in 1972. And he struggled with deadlines, he remembers blithely. “As the saying goes,” he says with a laugh, “if it weren’t for the last minute, nothing would ever get done.”

Bacow says he even participated in campus protests, which I find interesting, because it’s become something of a University president rite of passage to handle a student demonstration. During the Student Strike of 1970, he “piled into a car and drove all night with a lot of other people” to march on Washington. Once, in Harvard Square, he was tear gassed by Cambridge Riot Police.

Bacow says his most important experience, though, was meeting Robert M. Solow ’44, an economics professor who became the “not so invisible hand” in Bacow’s career. He says his friendship with Solow changed his outlook on what makes a college experience valuable.

“I think if students are lucky enough to be able to forge a bond like that with a faculty member, any faculty member, it almost guarantees that they’ll have a not only meaningful but rewarding experience in college,” he says.

Another reason Bacow is concerned with helping undergraduates is because he knows something about the value of opportunity. His parents were Jewish refugees who fled Europe during World War II, and he has talked candidly about the unlikeliness of his own existence.

“I think it’s really important that future generations have the same kind of opportunity that we have,” he says. “It’s not enough just to recruit students to a place like Harvard. We have to make sure they have the chance to thrive.”

He gets the importance of campus life, too. After all, most of his significant life moments happened while he was at school. He jokes, “I love being a student so much that I never left.” He met his wife Adele, for instance, on his first day at Harvard Law School when their roommates introduced them.

Bacow’s best friends are still the friends he made in college. As he emphasizes the importance of keeping up these relationships, I begin to regret the number of lunch plans I’ve bailed on over the last year.

“When Adele and I met, I was living with three guys. We had all met as freshmen at MIT. They were all named Alan except for me,” he says. “And the four of us all got married in the space of four successive weekends in June in 1975, and everybody is still married, and we’re still best of friends.”

Coincidentally, “all of them are coming into town this weekend.”

Bacow likens his upcoming reunion to The Big Chill, a 1983 movie that he says has “the greatest soundtrack ever for a movie” and that he insists I watch.

The rest of our run is relaxing and refreshing. The rain relents, the wind stops, and now Bacow is heading back to his office at the Kennedy School to continue coordinating his latest projects. He has histories of Harvard to read, friends to meet, and an FAS Dean Search to run in the immediate months ahead. And after those few months he will become President of Harvard…

He stops. The pedestrian light is red. Cars pass speedily across Memorial Drive, where we began. We’re talking about “The Graduate” and about rebellion now, odd conversation for someone tasked with running the country’s oldest university. But after running with him for an hour, I’ve realized it’s only one of the many eclectic things he cares about.

We finally stop stop outside of the Kennedy School, and I shake his hand. It’s a weird way to end a run.