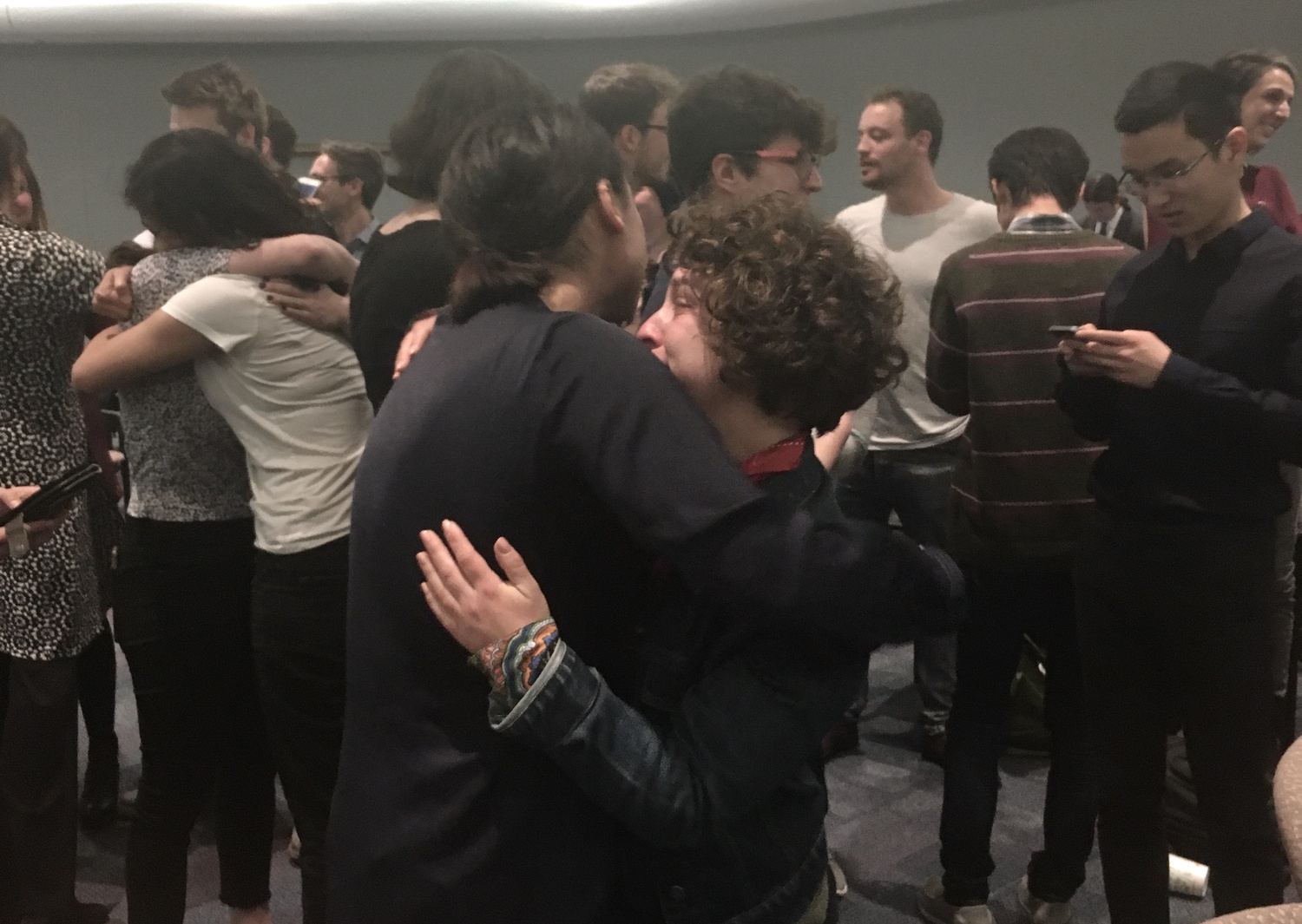 The man—National Labor Relations Board official Eugene M. Switzer—looked up from thousands of bottle-green ballots stacked on the table in front of him, paused for a half-beat, and announced Harvard’s teaching and research assistants had voted to unionize.

The room ruptured into tears and shouting.

Switzer’s announcement marked the end of Harvard’s second unionization election, held April 18 and 19 at polling sites in Cambridge, Allston, and Longwood. Over 3,500 eligible graduate and undergraduate research and teaching assistants cast ballots across the two days; ultimately, union advocates prevailed by a margin of 408 votes.

The installation of a student union at Harvard is unprecedented in University history.

National Labor Relations Board officials launched the marathon vote-counting session that decided the election at 9:40 a.m. Friday in the auditorium of the Thomas P. O’Neill, Jr. Federal Building. Those present paced the room—a grey-walled, windowless semicircle lit by linear fluorescent bulbs—for hours, occasionally stopping to huddle in small circles or peer over the shoulders of NLRB staffers tallying ballots. Union organizers nervously munched glazed donuts for much of the morning.

Both union and University affiliates left nothing up to chance. Multiple individuals on both sides scored careful running tallies of each green ballot NLRB staffers unsealed in lined notebooks.

NLRB officials spent the first three hours of the day figuring out how to deal with ballots cast by voters whose eligibility had come into question. But staffers resolved these dilemmas by 12:38 p.m., at which point many stepped out for a lunch break. Some sampled the offerings of a cafeteria located one floor above the auditorium—including dining on “imitation crab.”

Just before 2 p.m., the count began in earnest. NLRB staffers grouped the “Yes” and “No” votes into packs of 50 ballots each. Representatives from Harvard and the union at this point began swarming the officials, peering at stacks of ballots, shushing reporters in the room, and breaking off in groups to speculate about the likely result.

Around 3 p.m., Switzer—who also presided over Harvard’s previous 2016 unionization election, which saw the opposite result—moved all ballots to the center of three faux-wood tables. After six false starts, he announced a final tally of 1,931 ballots cast in favor of unionization and 1,523 against.

Just before 4 p.m., Switzer asked representatives from Harvard and the union to sign a document officially certifying the result.

“We’ve put in a lot of work, and I think through our organizing, we’ve seen how students want a say, a say in their workplace and a say in collective bargaining,” Bloesch said.

The campaign to form a graduate student union at Harvard stretches back to 2013—for many organizers, spanning their entire tenure at the University.

Organizer Marena Lin said she thinks the result will improve quality of life for graduate and undergraduate students in Cambridge.

“No student should ever feel alone now in what they’re facing at the University, and that’s a really big deal,” she said.

Several union organizers declined to comment Friday on their plans to celebrate the victory.

But one reveler let slip that union advocates spent Friday night at a familiar locale: Cambridge Queen’s Head Pub, one of the main polling sites during the election.

[The Crimson maintained an online article constantly updated with voter interviews throughout the 2018 unionization election. Look back on the two historic days here.]

Not all students shared in the revelry.

“This election should have been about coming together as a university and deciding whether unionization would help us achieve the change we want at Harvard,” Bloch wrote. “Instead, the union ran its campaign in a way that has fractured students into winners and losers.”

Mark R. Lipstein, an opponent of unionization, said he feels “resigned” to the reality of the union. He said he thinks students who opposed unionization “lacked the resources” available to HGSU-UAW.

“At this point it was just a death by a thousand cuts because they could keep running elections, they had so many resources, they were buying advertisements,” Lipstein said.

“The resources they had in comparison to people who were against it, who had pretty much just a Facebook group and posters that got torn down anyway, led to a recognition that this was going to happen someday,” he added.

Going forward, union organizers hope to bring “No” voters into the fold through a shared desire to make the University “better to do teaching and better to do work,” HGSU-UAW organizer Abraham J. Waldman said Friday.

“It’s their union; it’s our union too,” organizer Gabriel L. Schwartz said. “They may have disagreed with us about the best way to make the University better, but now we have this vehicle, and we’re excited for them to participate just as much as we are.”

In the days following the election, union organizers at other universities praised the outcome of the vote. Steven Manicastri, a union organizer at the University of Connecticut, wrote in an emailed statement that organizers at Graduate Employees of UConn-United Automobile Workers “welcome HGSU’s teaching and research assistants to the UAW family.”

“We congratulate them on their amazing campaign, and on their perseverance. We stand with them in solidarity on improving the working conditions of student workers across the country, and wish them a speedy timeline to a fair contract,” he wrote.

Columbia union organizer Olga Brudastova wrote in an email she thinks the vote strengthens graduate students’ ability to fight for bargaining power nationwide. Columbia graduate students will likely begin striking on April 24 in response to the Columbia administration’s refusal to bargain with its newly authorized union.

“Neither elite administrator campaigns against unionization... nor the Trump labor board can stop the growing momentum among RAs and TAs for the right to bargain, stronger recourse on sexual harassment, dependent benefits, and other improvements that will make our universities more just and inclusive,” she wrote.

A union organizer approached Seaman right after the announcement with one dollar and 44 cents in hand; a reference to the 1.44 percent base rate for UAW dues.

It is unclear what Seaman said, but the organizer retained the $1.44 when he walked away.