The Crimson advance to the tournament final for just the second time in program history. 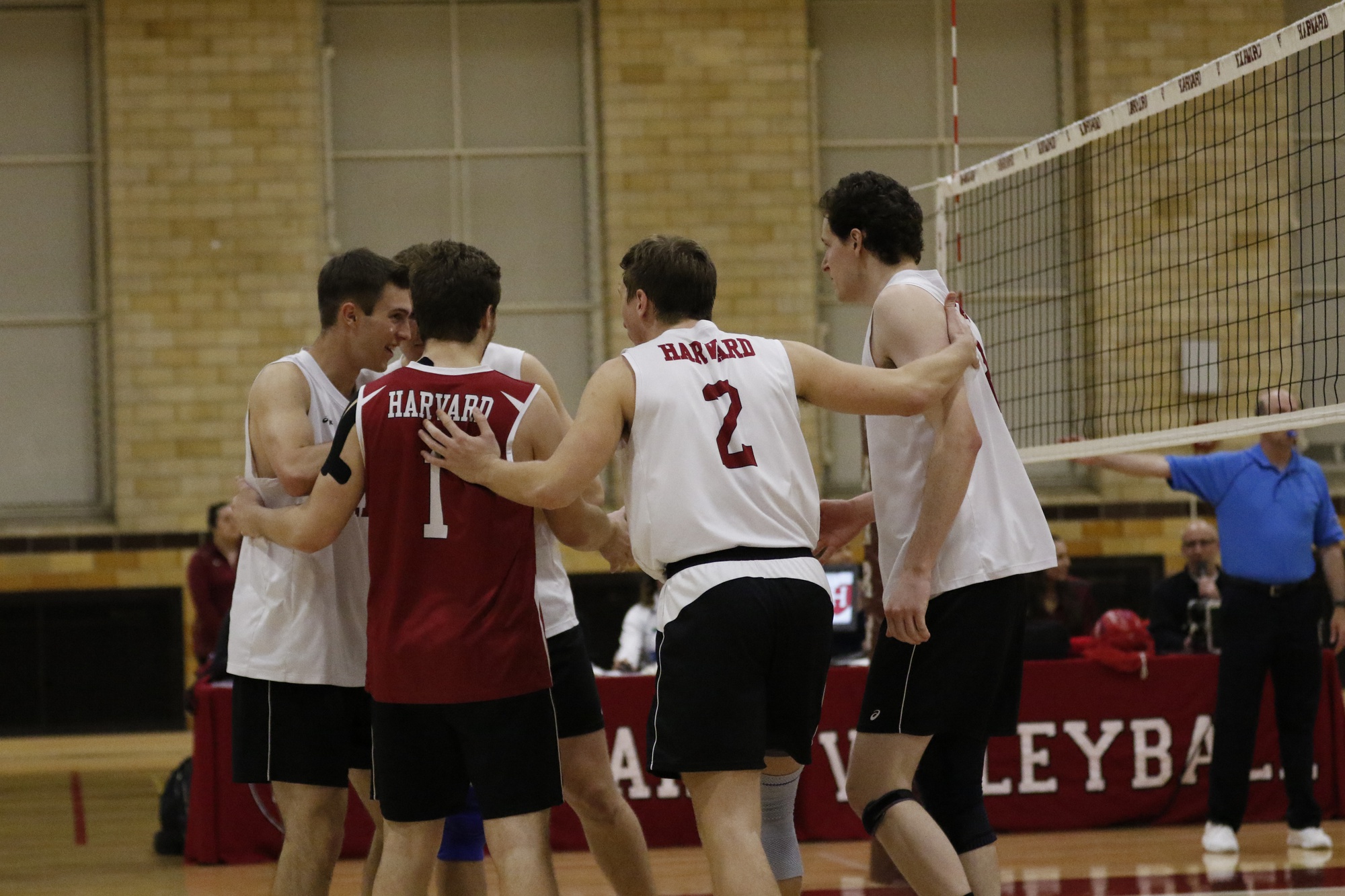 Senior setter Marko Kostich (2) and sophomore outside hitter Erik Johnsson (11) celebrate with their teammates after securing a point. Both players had seven kills on Thursday, with Kostich adding 22 assists. By Timothy R. O'Meara

Before last weekend’s setbacks at George Mason, the Harvard men's volleyball team had been on quite a roll. A six game win streak spanning two different months secured the Crimson a third place finish in the EIVA, and a spot in the conference tournament semifinal game on Thursday.

But Harvard (12-13, 10-4 EIVA) knew that as it flew out to Fairfax, Va., for the semifinal round against second place Penn State (15-11, 10-4 EIVA), a great finish to the regular season slate would mean less if the team could not find success in the postseason. Especially since these two sides had split the season series, a tie-breaking contest in the conference tournament loomed large.

“It was tough to lose the fourth set,” captain blocker Riley Moore said. “We didn’t really look good, [but] we pulled the huddle together and we just looked at each other and said 'This set is over, it doesn't matter. Just look at yourself and know you’re better than the guy playing your position on the other side.'”

It was certainly not an easy task to have that confidence entering Thursday's game. After failing to convert last weekend on a chance at the regular season crown against the Patriots, Harvard was able to quickly turn its focus to the semifinal match.

“Friday’s game [against George Mason] was a tough loss,” Moore said. “Saturday was a wash, we were focused on the playoffs. When we got in the gym on Monday we tried to put it behind us, focus on more important things, and not let old matches dictate how we play future games. We definitely know we are just as good or better than every other team in the conference.”

Against Penn State, the Crimson entered the fifth set after falling by a large margin in the fourth, 25-18. Tied at 8-8 in the fourth, a kill by Nittany Lions sophomore opposite hitter Calvin Mende, who stands at 6'11'', started a 9-2 run for Penn State. Height was an advantage for the second-seeded Lions all night, making it tough for Harvard on the offensive end.

“They’re a really big team,” Moore said. “They’re really good at blocking. They make it hard on you offensively, and try to make you make a mistake. Since the first [matchup], we’ve done a good job of limiting our own errors, and playing with a bit more confidence.”

Even with the size difference, the Crimson were able to best Penn State in blocks. It was ultimately an attack error that ended the game after Harvard went on a 9-5 run in the fifth, following a six-point tie earlier in this deciding set.

Just as it closed the contest, the Crimson opened the game with a dominant first set, winning 25-19, with three kills by Moore and two by senior setter Marko Kostich. Harvard stood strong in this first frame, forcing the taller Nittany Lions players to 13 errors while only committing five.

The second set was a different story, however. Penn State jumped out to a large lead, and although the Crimson rallied to make it 21-24, a kill by senior outside hitter Aidan Albrecht closed out the set for the Lions, 25-21.

“I thought our guys did a really good job,” Harvard coach Brian Baise said. “To come up with a win like that, under pressure, shows a lot.”

To the team, the job is not done. The Crimson will face Princeton on Saturday in the EIVA conference final, looking for its third win against the Tigers this season. The prior two wins bode well for Harvard’s chances, but the team understands the unique challenge at hand.

“They have a lot of different of weapons,” Baise said. “They have really good size, and they block very well. [But] our guys, they’re ready. They’re a team that can do it. They compete hard. I’m looking forward to what they can do Saturday.”