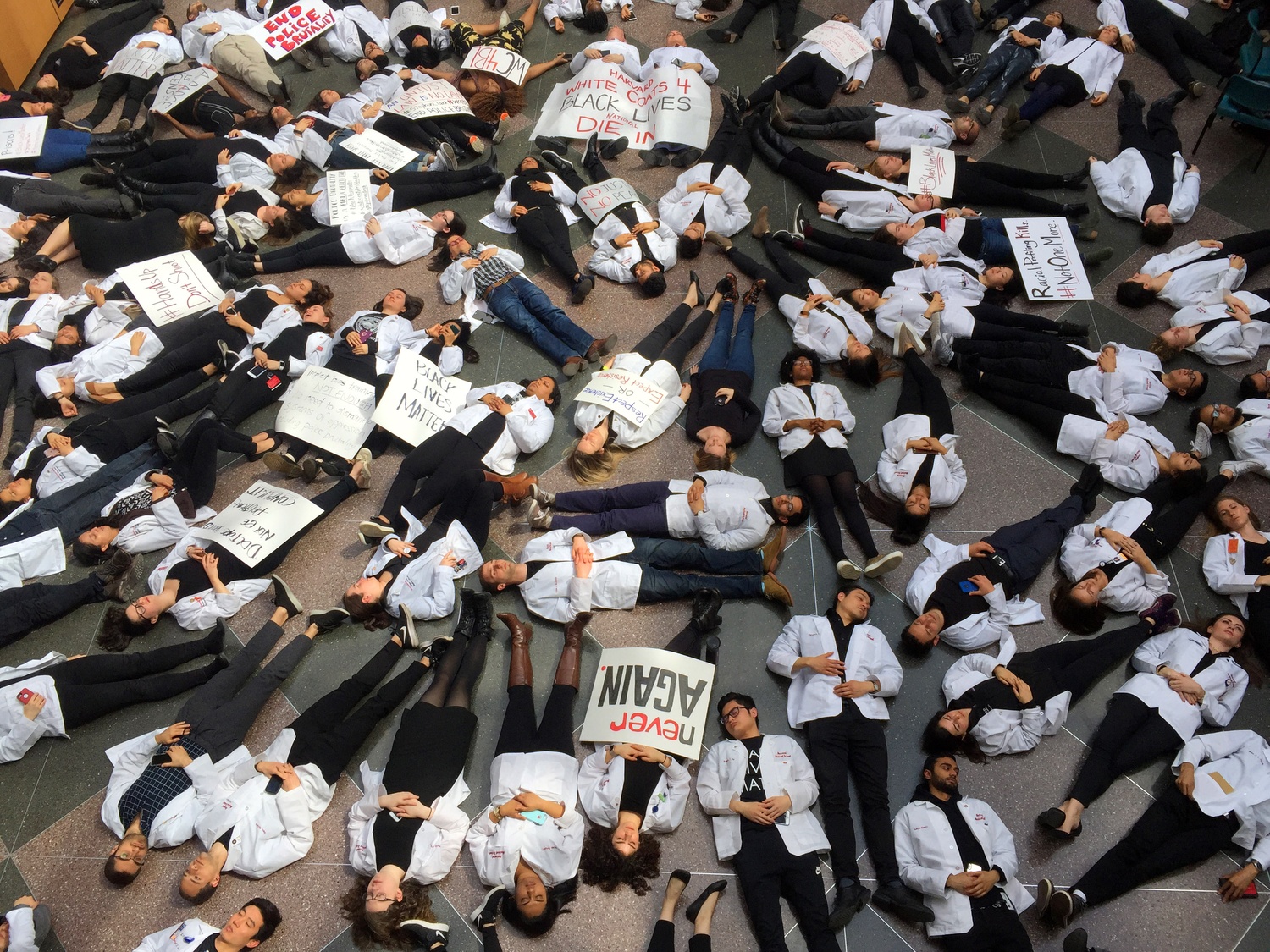 Students in the Longwood Medical Area held a demonstration against police brutality Tuesday in response to the killing of Stephon Clark in Sacramento, Calif.

Roughly 100 demonstrators clad in white lab coats lay down on the floor of the Tosteson Medical Education Center’s atrium in silence for the “die-in,” which was organized in coordination with other American medical schools as part of the “White Coats 4 Black Lives” movement.

Clark, a 22-year-old black man, was fatally shot by Sacramento police in his grandmother’s backyard after officers responded to a vandalism complaint. He was unarmed.

Many students and professors draped signs over their bodies, some of which read “respect existence or expect resistance” and “racial profiling kills.” Others held cell phones in the air to symbolize the cell phone that Clark was holding when he was shot by police.

As sunlight streamed in from the atrium’s ceiling, the demonstrators remained lying down for 20 minutes, one minute each for the 20 rounds fired at Clark. Students and professors gazed down at the protest and snapped pictures from the balconies above.

Several Medical School faculty and administrators, including Dean George Q. Daley, joined in the protest. Daley lay down in the middle of the crowd with a sign that read “Harvard White Coats 4 Black Lives” draped across his body.

Before the students’ die-in began, audience members circled around the atrium to listen to Ayotomiwa “Tomi” Ojo, a first-year medical student, who opened the event.

Though the Longwood protest was planned well in advance and was specifically in response to Clark’s death, it comes just days after the Cambridge Police Department forcibly arrested a black undergraduate—an incident which has sparked conversations about police brutality at Harvard.

In her speech, Ojo mentioned the arrest, saying the student was “a victim of excessive police force.”

CPD officers arrested the student Friday after responding to several calls about the undergraduate, who was standing naked at the corner of Massachusetts Avenue and Waterhouse St. A later police report states that three CPD officers and one Transit Police Department officer tackled the student after he made aggressive moves toward law enforcement.

But eyewitnesses, including members of the Harvard Black Law Students Association, have stated the officers acted “without provocation.”

A video of the incident later published by the New York Times and other outlets shows the student standing still surrounded by four officers while the officers talk to him. The student turns around and takes two steps towards one officer before stepping back and raising his arms to his chest. Another officer then tackles the student from behind.

While the student remained on the ground, at least one CPD officer punched the undergraduate in the stomach five times in an attempt to unpin the student’s arms and handcuff him, according to the CPD police report.

“When the events on Friday happened, it brought it a lot closer to home,” organizer Nambi J. Ndugga said in an interview after the event. She added that attending an elite institution does not provide “protection” against racism and other forms of discrimination.

Diana Ha, a School of Public Health student and University of California Davis medical student, spoke to the crowd after the designated 20 minutes when participants lay on the floor had elapsed.

“What we need is not just events like this, but real, institutional change,” she said.

David Hemenway, a professor at the School of Public Health and director of the Harvard Injury Control Research Center, then addressed the audience. He discussed the higher rates of gun deaths in the United States than in other developed countries.

Several other students from the Medical School and School of Public Health also spoke, some with prepared speeches and others extemporaneously.

Finally, Daley took the microphone, telling the demonstrators he did not originally plan to speak, but decided to do so while he was lying on the floor.

“That 20 minutes was a welcome respite for me to be thinking about this issue,” he said. “Looking at all of you, I feel hopeful, I feel very hopeful for the future.”

He called on students to research implicit biases, especially in healthcare, in order to find ways to reduce their effects.

“Please make Harvard proud. You have made me very, very proud today,” he said.

Ndugga said demonstrators wanted to leverage the prestige of their institution and career to compel change.

“Our main job is to go out and to serve our communities. We can’t do that if we don’t understand what they’re going through and how implicit racism and other forms of discrimination affect their health and well-being,” she said.

White Coats 4 Black Lives—a national organization of medical students that demonstrates against racism in policing—released a petition in response to Clark’s death. It calls for policies from the healthcare community “that will put a stop to this national crisis.” It claims almost 400 signatories, including students from the medical schools at Harvard, Yale, Brown, and Tufts.

“To address community trauma and violence, it is critical to mobilize health and mental health resources, build partnerships with the community, and understand systemic racism,” the petition reads.

This die-in was not the first protest of its kind at the Medical School. In December 2014, students held a “die-in” in the same location to protest police officers' use of lethal force against Eric Garner and Michael Brown.