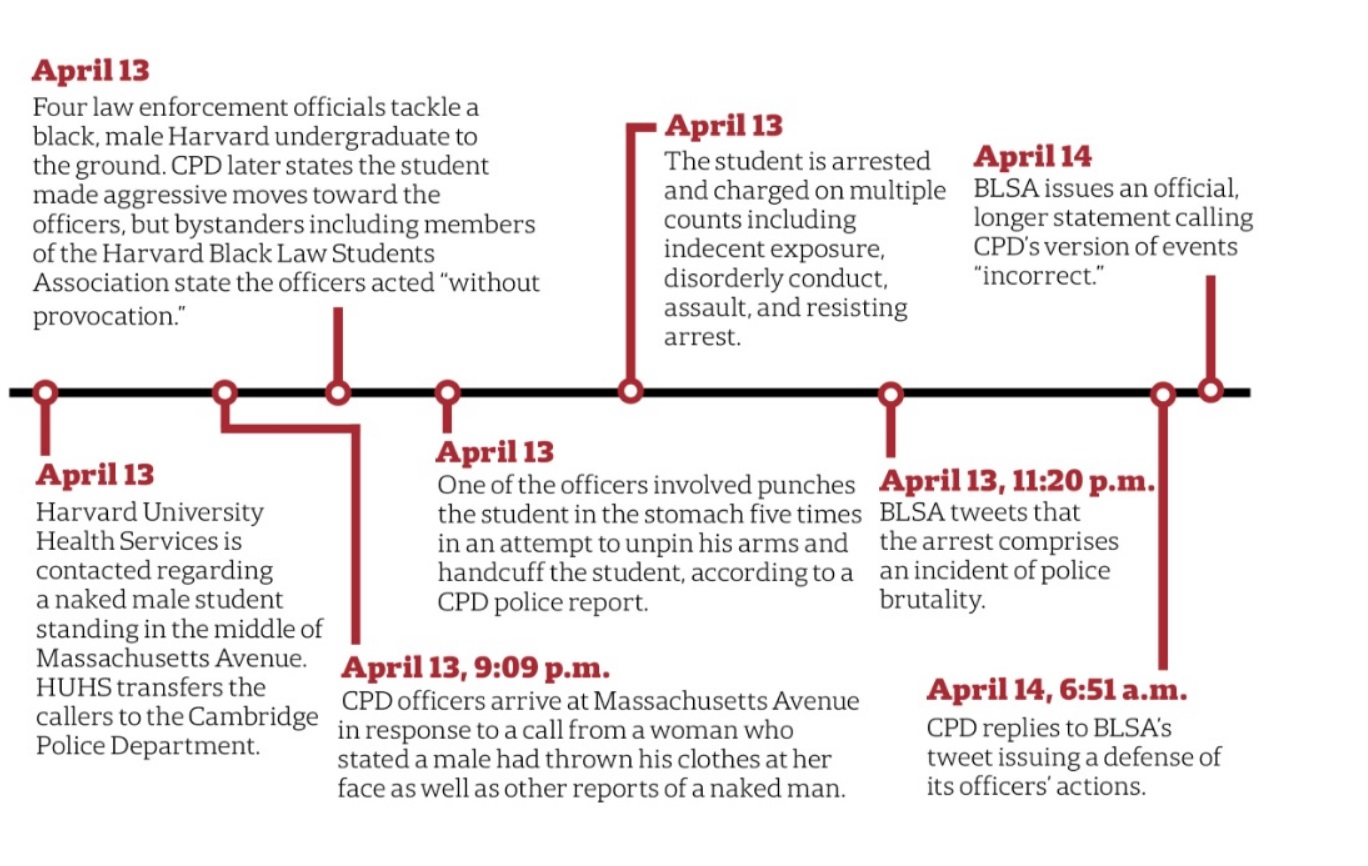 A black Harvard College student was arrested Friday night after a physical confrontation with law enforcement for charges including indecent exposure, disorderly conduct, assault, and resisting arrest, according to information posted Saturday by the Cambridge Police Department.

In response to the event, the Harvard Black Law Students Association posted a tweet calling the arrest of the student an incident of police brutality. BLSA also later posted a statement on its website calling CPD's version of events—published on social media—"incorrect." Members of BLSA, who wrote they videotaped the incident, wrote in the statement they saw the student, naked and unarmed, surrounded by at least three Cambridge Police Department officers.

In an unusual move, the police department tweeted a lengthy explanation of the arrest in direct response to BLSA’s tweet.

According to CPD’s tweet, officers arrived at the intersection of Massachusetts Avenue and Waterhouse at around 9:09 p.m. last night in response to “a call from a woman who stated a male had thrown his clothes in her face” and six other reports of a “completely naked” man.

The CPD wrote in its tweet that officers “located and verbally engaged” the student, who was standing on a traffic island in the middle of Mass. Ave. Officers learned from the student’s acquaintances that he previously “took narcotics,” which “could have a hallucinogenic effect when ingested,” according to the tweet.

The officers and the student then engaged in a physical altercation, according to the tweet from the CPD.

“Numerous attempts made by officers to calm the male down were met with opposition and his hostility escalated while officers attempted to speak with him,” department officials wrote in the tweet. “After he was observed clinching both of his fists and started taking steps towards officers attempting to engage with the male, officers made the tactical decision to grab his legs and bring him to the ground.”

BLSA released a statement Saturday evening stating that the CPD’s accounting of events is “incorrect.” BLSA’s statement, signed by “Concerned Members of the Harvard Community,” states that a number of BLSA members and admitted Harvard students witnessed the incident April 13—an incident the statement calls “a brutal instance of police violence.”

“A naked, unarmed Black man, stood still on the median at the center of Massachusetts Avenue and Waterhouse Street,” the statement reads. “He was surrounded by at least four Cambridge Police Department (CPD) officers who, without provocation, lunged at him, tackled him and pinned him to the ground.”

“While on the ground, at least one officer repeatedly punched the student in his torso as he screamed for help,” the statement continues.

The CPD tweet states that three officers from Cambridge Police and another officer from Transit Police “were required to gain compliance from the male” and place him in handcuffs.

The student was subsequently transported to a local hospital for an evaluation, and, while in transit, spat “a mixture of blood and saliva at an EMT,” according to the tweet.

The BLSA statement notes that “a pool of blood remained on the pavement” as the ambulance departed.

The student is currently under arrest and is facing charges of “Indecent Exposure, Disorderly Conduct, Assault, Resisting Arrest, and Assault and Battery on an Ambulance Personnel,” according to the CPD tweet.

“Once on the ground, the individual party had pinned his arms under his body making it difficult for officers to handcuff him,” Warnick wrote. “Physical force was used to unpin his arms and gain compliance in order to handcuff the party.”

Late Saturday night, Warnick emailed The Crimson a copy of the full police report detailing the sequence of events Friday. The report elaborates on the account of events presented in the tweeted statement.

“We informed him that we were only there to help him and were concerned for his safety,” reads a portion of the report, written by one of the officers involved. “It was made very clear that our pleads were not going to be received.”

After assessing that the student “could not be reasoned with,” one officer grabbed the student’s legs in order to bring him to the ground, according to the report.

Unable to pry the student’s “hands from underneath his body, I delivered approximately 5 strikes with a closed fists to the area of his stomach,” the report reads. “These seemed ineffective.”

In a statement sent to Cambridge City Councilors following the arrest, Cambridge Police Commissioner Branville G. Bard, Jr. described the arrest and specifically discussed the five punches the CPD officer delivered to the student's stomach. Bard wrote he had received questions and concerns from "select members of the community" and that "the primary concern" centered on these punches.

"In a rapidly-evolving situation, as this was, the officers primary objective is to neutralize an incident to ensure the safety of the involved party(ies), officers, and members of the public," Bard wrote. "To prevent the altercation from extending and leading to further injuries, particularly since the location of the engagement was next to a busy street with oncoming traffic, the officers utilized their discretion and struck the individual in the mid-section to gain his compliance and place him in handcuffs."

The BLSA statement argues that other Harvard resources should have “been mobilized to come to the student’s aid prior to CPD getting involved.” In particular, the statement notes that Harvard University Health Services were contacted first—but that HUHS transferred the callers to CPD.

The department failed to “appropriately respond to the individual needs of the person concerned” by “resorting to violence unnecessarily and with impunity,” the statement reads. The statement further states that HUHS put the student “at great risk of being killed by the police” by choosing to involve CPD.

“Officers responded, but when they arrived the suspect was already under arrest,” he said.

The BLSA statement makes several demands in the wake of the incident, including that the officers involved in the arrest be “investigated and held accountable” and that Harvard create an “internal crisis response team to support” affiliates that “does not involve CPD.” The statement calls on Harvard to offer “support from the school, fellow students and our instructors” to “put pressure on the CPD” to comply with BLSA’s demands.

The statement further demands that CPD respect the rights of civilians to record police conduct. CPD’s own policies recognize that individuals have the “right under the First Amendment to openly record police activity in public in a peaceful manner,” according to the statement.

“It was clear to our Harvard BLSA members that CPD officers were not following these procedures,” the statement reads. “But for our members’ persistence in defying police attempts to obstruct videotaping this incident, there would be no record.”

A Harvard Law student tweeted out what appeared to be a video record of the arrest over the weekend, but later deleted that video.

“We are reminded, as soon-to-be-graduates of an elite law school that we cannot protect our bodies with our degrees—and that is why we also call our current students and alumni to embrace these demands as inclusive to all Black people, not just Harvardians,” the statement reads.

The statement notes the April 13 incident has "broader political implications" for students and for Bostonians. The statement explicitly states, though, that BLSA is not "contextualizing this event in the broader instances of police violence" out of respect for the privacy of the victim and his family "at this time."

CPD plans to hold an “internal review” of the incident given “use of force was required to gain compliance” from the student to “avoid further injury to himself,” according to the police department’s tweet. The review will be conducted by the department’s leadership and by its Professional Standards unit, according to the tweet.

As a matter of policy, CPD conducts such internal reviews whenever officers use force.

"Because the police department carries an affirmative burden to demonstrate that the exercise of force was necessary and appropriate, the department must conduct a complete and thorough review of all such incidents," the department's 2011 policy reads.

Cambridge City Manager Louis A. DePasquale wrote in a statement to City Councillors over the weekend that he believes the outcome of the review will allow CPD to learn "lessons" from the arrest.

"I await the outcome of the internal review and analysis of this incident by the Professional Standards Unit," DePasquale wrote. "I have great faith in Commissioner Bard and the men and women of Cambridge Police Department and I am confident that they will use this as an opportunity to reflect on lessons that can be learned from this incident."

"I know that the Cambridge Police Department takes great pride in serving and protecting the City of Cambridge," DePasquale wrote.

Roland S. Davis, the College's associate dean for diversity and inclusion, addressed the incident in an email he sent to College students Saturday afternoon.

"Please know that our primary concern is for the student's well-being and privacy, and that we will be working with them and their family to attend to these needs," Davis said. "However, we are very much aware of the wider societal backdrop in which this has happened, and want to acknowledge that this incident may be upsetting to many of you."

BLSA held a gathering in Wasserstein Hall at the Law School at 5:30 p.m. Saturday evening to discuss the incident.

University spokesperson Rachael Dane wrote in an emailed statement that the University is "aware of the forcible arrest of a Harvard student by the Cambridge police department last night."

"We are concerned and gathering information about the facts and circumstances leading up to the arrest and understand that the city of Cambridge is reviewing the situation," she wrote. "University officials are also working, as they always do, to care for and support our students."

A previous version of this story indicated Harvard Black Law Students Association had released a public statement in response to the Cambridge Police Department's lengthy explanatory tweet and quoted some erroneous information contained in that statement. In fact, the document originally referenced in this story was a draft letter being circulated internally by BLSA; the draft contained some incorrect information regarding CPD's videotaping policies. CPD does not, in fact, have a policy requiring its officers to wear body cameras. After BLSA released its official statement Saturday evening, Crimson editors updated this article with the final statement.

Editor’s Note: A previous version of this article embedded tweets from the Cambridge Police Department, the Black Law Students Association, and Harvard Extension School student Ernest Owens, who tweeted out an internal draft of a BLSA letter responding to the incident. The Crimson has decided to remove the embedded tweets from the article out of concern for the privacy of the student involved.

—Staff writer Michael E. Xie can be reached at michael.xie@thecrimson.com. Follow him on Twitter@MichaelEXie1.