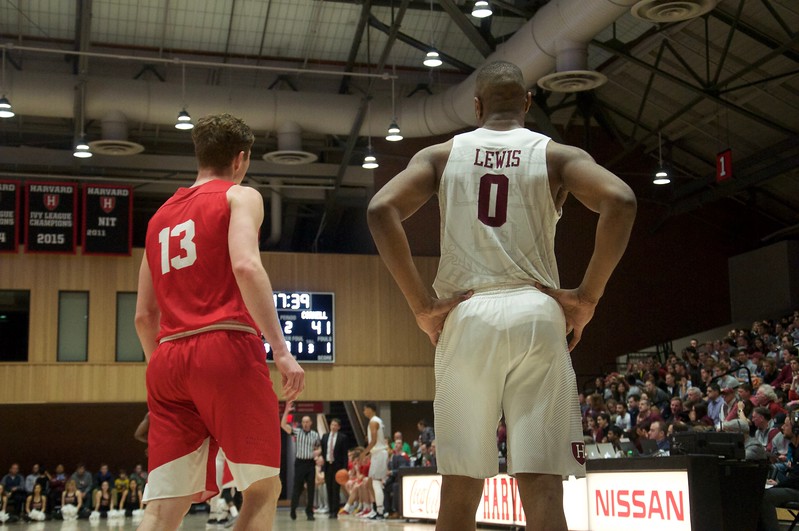 With just over a minute left in overtime and with Harvard up 86-85 against Cornell, what might’ve the biggest play of the night happened outside of Lavietes Pavilion.

In fact, it happened all the way in New Haven.

In the heat of a neck-and-neck game, Crimson fans looked up to see the Bulldogs had beaten Penn 80-79 on a last second layup from Yale freshman forward Paul Atkinson. The Penn loss puts Harvard’s hopes of a conference title in its own hands—that is, if the Crimson could come away with the win on Friday night.

With 27 ticks to go, junior guard Joel Davis made a layup to give the Big Red—a team still fighting for a spot in the conference tournament—the lead. On the ensuing possession, and with just under ten seconds on the clock, sophomore guard Seth Towns received the ball at the top of the key. After a pump fake, Towns crossed over his defender and drove towards the rim, but was fouled before throwing up a shot.

With five seconds on the clock, the sophomore headed to the line with the chance to give Harvard the lead. He missed the first, but made the second, tying the game at 87. Seconds later, a 30-foot heave from junior guard Matt Morgan clanged off the back iron.

The Crimson headed into a second overtime. Heading into this frame, though, a win assured a shot at the conference title.

In what has slowly become a staple of the Crimson’s offense in conference play, the Crimson shot the lights out from deep on Saturday. Led by sophomore wing Justin Bassey, who finished the night shooting four-of-five from three, the Crimson shot a blistering 48 percent from beyond the arc.

In the second half in particular, Harvard needed all of the long balls that it could get. Over a stretch of just under three minutes, Morgan—currently the eighth-leading scorer in the nation—rattled off 11 straight points for the Big Red. He finished the night tying his season-high of 34 points on 12-of-22 shooting from the field.

“There was a stretch in the second half where he came out and hit three or four threes in a row for them,” Bassey said. “Going into media timeout we really have to emphasize slowing them down and figuring out how was he getting the shots, where we were breaking down to where he was getting wide-open looks at the hoop.”

Despite the early foul trouble, Towns matched Morgan shot-for-shot, scoring 10 of the Crimson’s 12 points over the same stretch.

For the Crimson, it was the long ball that kept it in the game. Harvard shot six-of-nine from deep in the second frame while ending an early stretch of turnovers that saw it cough up the ball over 11 times through the first 20 minutes of play.

Though the early turnovers cost the Crimson early, it made up for it on the defensive end. Harvard held Cornell to 32 percent shooting through the first frame and 39 percent on the game.

IN THE PAINT AND AT THE LINE

While the Crimson certainly thrived from beyond the arc, Harvard’s post play, and in particular sophomore forward Chris Lewis’ play, carried the Crimson for much of the night.

The sophomore tallied a career-high 29 points on 11-of-13 shooting from the field to go with seven rebounds. Despite committing a late foul that would send the game to its first overtime, Lewis came through to seal the win late.

Holding on to a one-point lead with 1:12 to go in the second overtime, the Crimson broke the Cornell press and junior guard Corey Johnson passed the ball to Lewis near the baseline. Lewis rose up and emphatically dunked the ball over the Cornell defender and through the foul. The sophomore made the free throw to give the Crimson a two possession lead it would hold until the buzzer sounded.

“You look at Lewis’ production, and we have to play through him as we know. Obviously the foul he made late, which gave them the chance at the and-one when we were up three was just a tremendous let down,” head coach Tommy Amaker said. “But I thought he was really possessed and determined, especially when we had to go to overtime, to win it. He played sensational basketball there as well.”

Though the Big Red struggled to find the back of the net early in the game, an early stretch of fouls kept Cornell in the game. The Big Red went to the like 16 times in the first frame alone, converting on 13 of those.

Despite Cornell keeping it close at the line, the Crimson would close it out from the charity stripe.

With both teams in the bonus heading into overtime, Harvard found itself at the line for much of the rest of the way, going 12-of-13 through two overtimes while sending standout Cornell forward Stone Gettings to the bench after earning his fifth personal foul at the 2:45 mark in the second overtime.

“We needed to make sure we were focused and ready for the challenge in front of us which we knew would be a challenge—they were fighting for their lives to make it to the conference tournament and they played like it. We knew that, we know how hard it was going to be this weekend, starting tonight.”