Record-Low 4.59 Percent of Applicants Accepted to Harvard Class of 2022 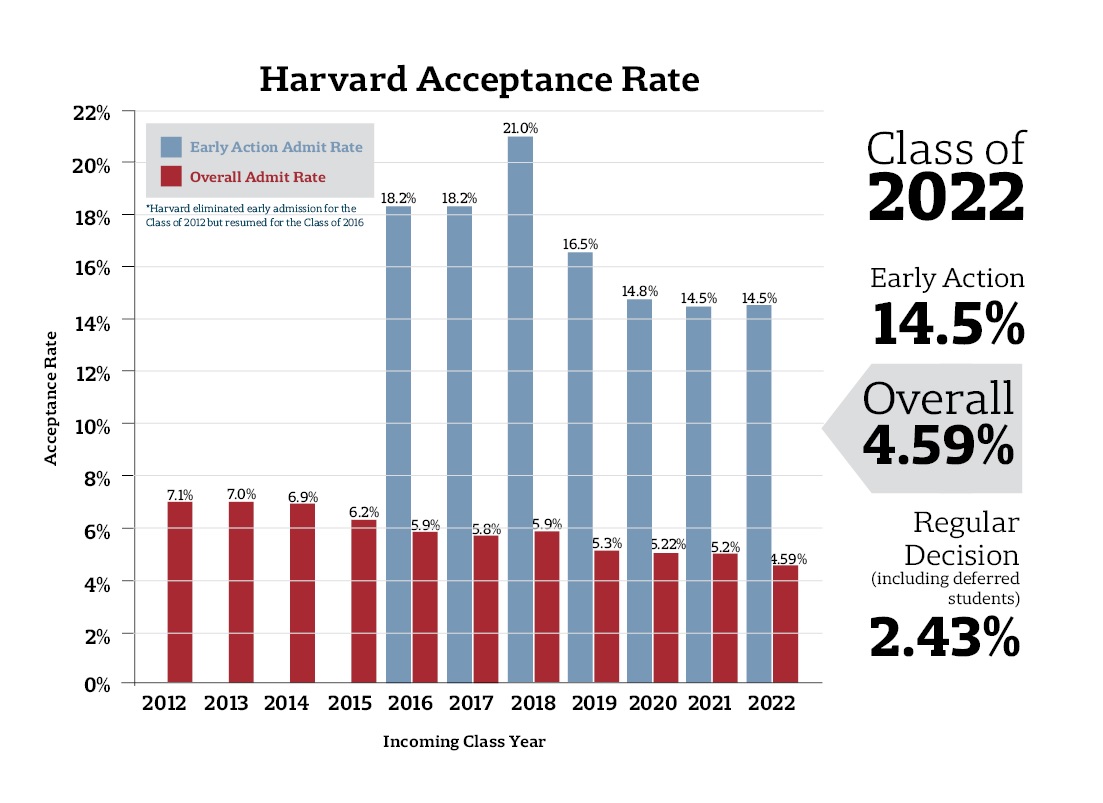 A record-low 4.59 percent of applicants to Harvard College received offers of admission to the Class of 2022 Wednesday, with just 1,962 of 42,749 candidates securing spots in the class. This year marks the first time Harvard’s admission rate has ever dipped below 5 percent.

“They are quite an amazing cohort of people because they’re coming from the widest range of economic and ethnic backgrounds in our history,” Dean of Admissions and Financial Aid William R. Fitzsimmons ’67 said in an interview Wednesday.

For the first time in 10 years, a majority of accepted students are women. Women make up 50.1 percent of the admitted class, compared to last year’s 49.2 percent.

Harvard has previously denied allegations that it discriminates against Asian-American applicants, arguing a diverse set of factors contribute to its holistic application review process.

First-generation college students make up 17.3 percent of this year’s admits, up from 15.1 percent for the admitted Class of 2021.

“We’re really thrilled to see the jump in first-generation students,” Fitzsimmons said Wednesday. “This is one of those years where I think we had some breakthroughs.”

Fitzsimmons also touted the class’s socioeconomic diversity, citing the success of the Harvard Financial Aid Initiative over the past few years in making an education at the College practical for students from low-income backgrounds.

Currently more than half of students at the College receive some form of need-based financial aid. Twenty percent of families—those making less than $65,000 annually—pay nothing at all toward the cost of their student’s Harvard education.

“The doubling of the applicant pool is a measure of exactly how important financial aid is to making a case to people that whoever you are, you can afford to be here,” Fitzsimmons said.

This year, a record 20.3 percent of admits could qualify for Federal Pell grants, money allotted under a government initiative that seeks to help low-income students. Fitzsimmons said the number of admitted students eligible for these grants has doubled since the launch of the financial aid initiative in 2004 .

Students admitted to the Class of 2022 hail from all 50 states, and 90 countries around the world. International students make up 12 percent of admitted students, up from 11.4 percent last year.

This year’s admission cycle comes after a record-high 84 percent of the admitted Class of 2021 chose to matriculate. The unusually large class size forced administrators to house 28 freshmen in overflow housing. Fitzsimmons previously said the College planned to admit fewer students into the Class of 2022 in hopes of allowing “40 to 50 to maybe 100 people” off the waitlist.

Last year, Harvard did not admit any students from the waitlist.

Fitzsimmons said the Admissions Office’s target class size is around 1,665, indicating a predicted yield of around 85 percent for the Class of 2022.

The sticker price for enrolling in the Class of 2022 will be the highest in the College’s history. The total cost of attendance for the 2018-2019 academic year will be $67,580, an increase of 3 percent over the previous year.

Acceptance letters slated to be sent to students Thursday will include an invitation to Visitas—the College’s visiting weekend for admitted students—which will run from April 21 to April 23. Students have until May 1 to accept, defer, or decline their offers of admission.