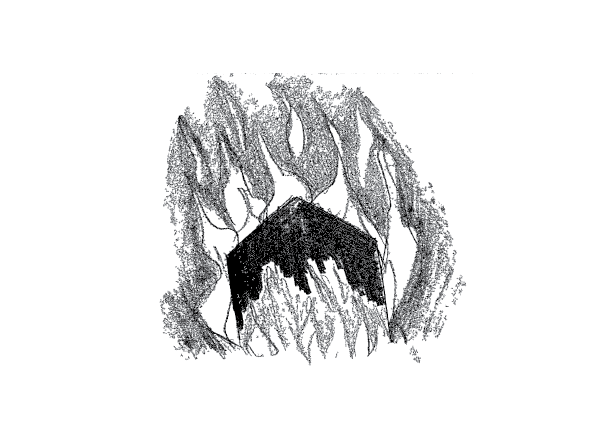 ​My grandmother stood shaking in the open doorway. She called out to my mother and her younger sister, warning them to raise their blue canvas backpacks above their heads as they stepped off the school bus and ran across the front yard. She didn’t know what the end of the world looked like, but she must have imagined that it might suddenly rain down from the sky in large, fiery droplets.
By Hillary A. McLauchlin

My grandmother stood shaking in the open doorway. She called out to my mother and her younger sister, warning them to raise their blue canvas backpacks above their heads as they stepped off the school bus and ran across the front yard. She didn’t know what the end of the world looked like, but she must have imagined that it might suddenly rain down from the sky in large, fiery droplets.

Overnight, the local plant had begun to leak radiation after an overwhelming amount of heat and pressure built up in its reactors. It was the result of random mechanical glitches, poor oversight, and human error—I’ll spare you the technicalities. My mother and her classmates were rushed out of their seventh grade Social Studies class as sleepy Middletown, Penn. became the center of the largest nuclear meltdown in United States history.

Less than five miles from Three Mile Island, my mother’s home sat along a path of unknown destruction. No one really knew what was happening—all that people knew about nuclear disasters was the improbability depicted in “The China Syndrome,” a futuristic thriller then creating a stir in theaters earlier that month. Cars packed with young families, my mother’s among them, set off for the mountains.

On any other day, if you stand outside my mother’s childhood home, you can catch the aroma of milk chocolate from the Hershey factories nearby. On March 28, the air was fresh and the sky clear, but my mother held her breath.

I hadn’t given much thought to our upcoming conversation as I scrolled through the news on my phone. I’d only been home a day or so, and knew that my parents had wanted to talk to me. I figured it would be about our upcoming move or another box to sort through before selling the house.

The conversation was about the move, but the three of us would not be making it together. Our small family unit had divided into two and now, I stood somewhere in between. It was the result of deception, poor oversight, and significant human error, but I’ll spare you the technicalities. All of the obvious warning signs had been there, but unknown to me.

I couldn’t understand how the sky remained so blue and the sun so bright on the afternoon that my world unexpectedly crashed down. Unable to react, I sat in shock. I wanted nothing more than to run.

They arrived at a small, somewhat decrepit cabin set deep in the Poconos forest. They would share the wooden house with my grandfather’s new family, including his younger second wife and a son the same age as one belonging to his first. Any awkwardness was assuaged by the prospect of imminent nuclear collapse.

A knock on the door interrupted the endless waiting. On the porch stood a young, friendly couple and their two elementary school-aged daughters. Staying in a cabin next door without power during the evacuation, the family asked to borrow a few candles to light the house that evening.

In the middle of the night, my adolescent mother awoke to the sound of screams. She looked out the window but all she saw was a wall of orange. Instead of large droplets, the end of the world would be signaled by a vivid flash of color.

As her eyes adjusted to the light, she descried the couple living next door. She noticed the wife first because of her nakedness. She clung to her husband, wrapped only in a sheet as she watched her home burn to the ground.

We spent a week in tenth grade Chemistry delving into the mechanics of nuclear reactions. An unstable nucleus divides into smaller parts, emitting energy. These new fragments are no longer the same element, their isotopes irrevocably modified in the process of fission. A single division sets off a chain reaction.

According to my mom, after a week or so, school was back in session. Sure there were conspiracies, but kids quickly moved past discussing the events at Three Mile Island. The nuclear threat hadn’t been from some foreign adversary; it had originated domestically. While clocking in at a five on the seven-point nuclear event scale, meaning it qualified as an “accident with wider consequences,” the meltdown had not killed anyone.

I wonder if this chain reaction ever really stops. Even as the meltdown is contained, trace amounts of radioactive fallout lie dormant, having seeped into the water and soil. It’ll take a lifetime, or multiple, to disappear.

One can’t easily forget watching a home burn to the ground.