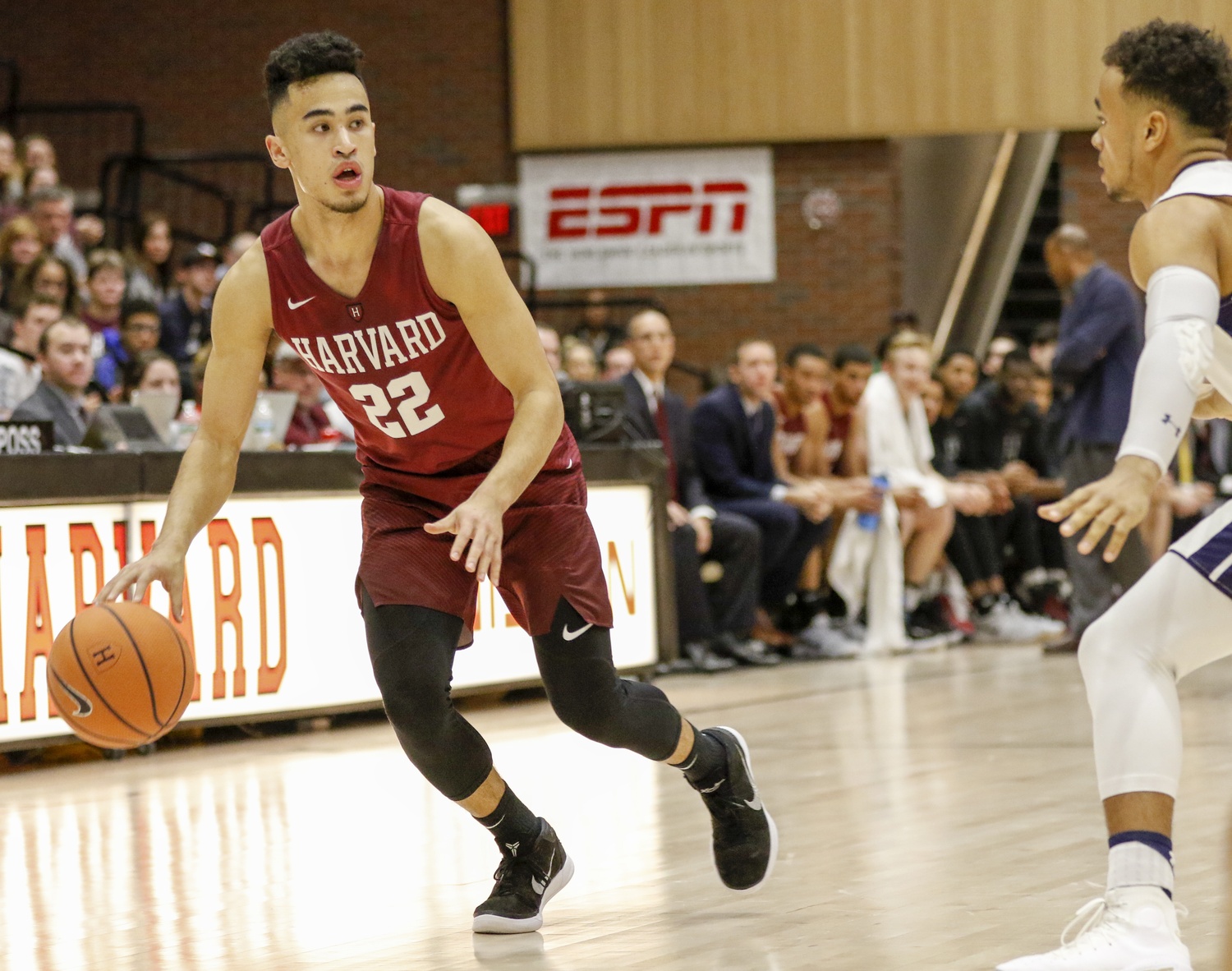 Since we didn’t run a preview in yesterday’s paper, we figured that we’d dedicate the first half of this column to giving you a sneak peek of Harvard’s two opponents this weekend, Cornell and Columbia. The Crimson will take on the Big Red on Friday and the Lions on Saturday, with both games tipping off at 7:00 at Lavietes Pavilion. The second game of the weekend will be Senior Night, during which Harvard will honor captain Chris Egi as well as his classmates Andre Chatfield and Zach Yoshor. Although the trio has combined for just 41 minutes of game action this season, the seniors have been lauded for their leadership off the court for a team that features 10 underclassmen.

While the Crimson (15-11, 10-2 Ivy League) is locked into a top two seed in next weekend’s Ivy League Tournament, both of New York’s Ivy League teams have much to play for this weekend. With both clubs sitting at 5-7 in conference play, the four seed in the conference tournament will almost certainly be whichever team fares better against Harvard and Dartmouth this weekend. While the Crimson’s seeding depends on the results of Penn’s games with Yale and Brown, Columbia controls its own destiny and would qualify for the conference tournament with two wins this weekend.

On paper, both the Lions and Big Red seemed poised to split the weekend, with each team expected to beat lowly Dartmouth and fall to Harvard. If that were the case, Columbia would get the bid to the conference tournament by virtue of its win over Harvard back on Feb. 2 (since Columbia and Cornell split their two head-to-head meetings). However, two of the beauties of Ivy League basketball are that the sport is in fact played on hardwood and that anything can happen, especially given the league’s unique scheduling structure, in which teams play games on back-to-back nights.

As in life, there are very few certainties in Ivy League basketball, but being able to beat Dartmouth is usually one of them. However, a painless trip to Hanover is no sure thing for either of these teams. The Big Red edged their Big Green counterparts by one in Ithaca while the Lions’ margin of victory was a mere three. While Dartmouth has lost two straight, both of its conference wins came at home in February—the first on Flannel Night when Princeton was in town on Feb. 10 and then a week later when 767 people were on hand to watch the beloved Big Green top Brown. All kidding aside, just ask Yale coach James Jones how hard it is to win in Hanover a night after topping Harvard.

The Crimson has already seen both Columbia and Cornell once this season. Harvard fell to to Columbia in Morningside Heights for the third straight season, 83-76, on Feb. 2 before topping Cornell in Ithaca, 76-73, the following night. Despite the teams’ identical conference records and notorious sideshows—the Columbia University Marching Band and the Big Red Cheerleaders—the Lions and Big Red are two very different teams.

Cornell is ultimately a two-man show and that reality was evident when it faced off with the Crimson last month. Guard Matt Morgan and forward Stone Gettings make Cornell go and are largely the only two reasons why the Big Red has anything to play for this weekend.

Cornell averages 76.5 points per game (over 10 points more than Harvard scores per contest) but is dead last in the Ivy League in opponents’ points per game. Perhaps what is more interesting about the defensive inefficiency is that the Big Red is in the middle of the pack when it comes to opponents’ field goal percentage but is the worst team in the conference at defensive rebounding.

In Cornell’s first meeting with the Crimson, Morgan and Gettings did their damage as the rest of their team largely watched. The pair accounted for nearly 66 percent of Cornell’s points against Harvard in a season in which the juniors have combined for over 52 percent of their team’s scoring. Gettings has gone for 20 or more points nine times this season while Morgan has accomplished that feat on 17 different occasions. Needless to say, the matchup on Saturday will largely come down to how good of a job the Crimson does on stopping the Big Red’s dynamic duo. On the offensive side, Harvard will need more production out of its role players. Sophomore forwards Seth Towns and Chris Lewis combined for 13 field goals in Ithaca while the rest of the team had just 12.

Like Cornell, Columbia is near the top of the Ivy League on the offensive end. However, the Lions rely on their balance and are the more experienced of the two teams. Columbia coach Jim Engles has six players averaging over six points per game and 10 players logging over 10 minutes per contest. While sophomore guard Mike Smith is the team’s leading scorer (fourth in the Ivy with 17 points per game), he is far from the only scoring option for the Lions. Junior guard Quinton Adlesh led Columbia with 20 points in his team’s first meeting with Harvard while senior guard Kyle Castlin and junior forward Lukas Meisner chipped in 16 points apiece.

Columbia is the second-best three-point shooting team in the conference and has the second-lowest turnover rate in the Ancient Eight. In its first matchup with the Crimson, the Lions were able to capitalize on the skill of their imposing frontcourt. Sophomore Patrick Tape, Columbia’s starting center, is one of the few Ivy League centers who has a height advantage on Lewis while Meisner, who averages almost 12 points a game, has an inch on Towns. Although Towns went for a career-high 31 points against the Lions back in February, Columbia was able to hold the rest of Harvard’s roster to 15-of-42 shooting from the field. Lewis was particularly quiet, finishing with just seven points, his second-lowest output in a conference game this season, and the Crimson relied heavily on its three-point shooting.

Not for nothing, the Lions are pitiful on the road. Columbia is winless in six Ivy League away games and its only road victory this season came against Longwood, which finished the year in tenth place in the Big South after posting a 7-25 record.

The two keys for Harvard on Saturday will be whether it can get more production out of its frontcourt and whether it can neutralize Columbia’s potent backcourt. The Crimson has done an impressive job of containing Smith in its three matchups with the sophomore but has lost two of those largely because it has allowed other guards to beat it. Harvard will need to keep Adlesh, Castlin, and company in check as well if it wants to send its seniors out in style.

Now to the picks:

This will be the last time we make these picks—and we intend to go out in a burning and fiery blaze of glory.

Coming off an undefeated season that saw Princeton take Notre Dame to the wire at the tournament, let us say it has been an absolute pleasure to watch the Tigers fall harder than Harvard’s endowment over the past few years.

The Daily Princetonian has devolved in its coverage of the team—instead opting to cover incoming recruit Jaelin Llewellyn, rated the 96th best player in his class by ESPN.

If you’re reading this Jaelin, please listen closely and keep in mind that it’s still very possible to decommit.

First of all, you’ll probably be playing behind ball-hog-in-chief Devin Cannady. It’ll be like playing with Kobe, except you don’t win. Also you can’t pump your own gas in New Jersey and the only redeeming quality of Princeton is a sandwich shop called Hoagie Haven. That’s pretty much it.

On the other side of this matchup, Brown has dropped four in a row.

In theory we make our picks based off the relative skill of these teams but sometimes you have to go with your heart.

Truth be told, here in Cambridge people don’t actually hate Yale that much. If anything, we feel kind of sympathetic to the poor souls out in New Haven. Just think about it—Yale’s mascot is an inbred puppy and according to the Yale Daily News, just last week a Yale student was fined for jaywalking. For a period of time the most popular class in New Haven was exported from Harvard. Coming off a historic win in the tournament two years back, the Bulldogs have dropped quicker than Bill Clinton’s trousers on a given day in the Oval Office. This is the sad reality of Yale.

For its part, though, Penn graduated our Dorito-in-Chief. No sympathy here.

The following is the most recent headline to come out of Cornell.

While the Big Red has definitely had a resurgence these past few weeks, Ithaca has clearly devolved.

It would be tough to find a redeeming quality in Cornell, but the school has always bested its Ivy League counterparts in one aspect—its admissions rate. Hold on to that one tight, Cornell.

Believe it or not, every team except for Dartmouth can still make the Ivy League tournament coming into this last weekend. The excitement around the tournament has been so great that the Ivy League just inked a sponsorship deal with none other than Porsche.

The real joke here, though, is the fact that both of these teams lost nine in a row at one point this season.

It’s a sad reality. Dartmouth’s athletics website has been relegated to finely worded titles on its previews. The one for the men’s basketball team this weekend is a real gem—“Men Close Out Season at Home as Potential Spoilers.”

Pour one out for the Big Green.

In the grand scheme of things, the past few years have been a true fall from glory for the Quakers—Penn boasts an overall winning record against every school in the conference and from 1970 until 2007 they would go to the Big Dance 22 times.

Sure they’ve lost in the first round their last eight times out, but it would be hard to deny the Quakers weren’t the kings—or more likely, yeomen—of the Ivy League.

Since that last dance in 2007, however, they’ve struggled—finishing top-3 in conference just once.

With that said, things are looking up for the Quakers. They’re at the top of the conference and in what will certainly raise plenty of red flags, they have home court advantage for the conference tournament.

This might be their year, but this game is a lot more important to the Bears.

We would remiss if we didn’t make one last mention of the Columbia University Marching Band.

To be honest, if someone has a framed copy of the esteemed band’s constitution, we’d be willing to pay top dollar.

Unlike Penn, Harvard has the honor of being included in the band’s constitution. Article the Eighth reads as follows, “Harvard needs to keep their pants on and their lights off.”

The plot between these two schools, however, thickens.

In a 2012 article form The Crimson entitled “Columbia: The Ivy League’s Worst Athletics Program” a venerable editor here argued just that and raised several valid reasons. Unsurprisingly, it was received with less enthusiasm in New York, amassing a grand total of 77 comments, most of which appeared to be disgruntled Columbia students.

In the spirit of this non-existent rivalry, we’d like to share our favorite line from the piece.

“They’re even bad at squash. Columbia didn’t take a single game against Harvard, Dartmouth or Yale on the men’s side, nor Princeton, Penn, Cornell, the Bulldogs or the Crimson on the women’s side. They play nine games a match in Ivy squash.”

You can’t argue with that.

Ah, the annual battle between Harvard’s little brother and sister.

We’ll leave it to the audience to guess which is which.