On the End of the Men's Basketball Season 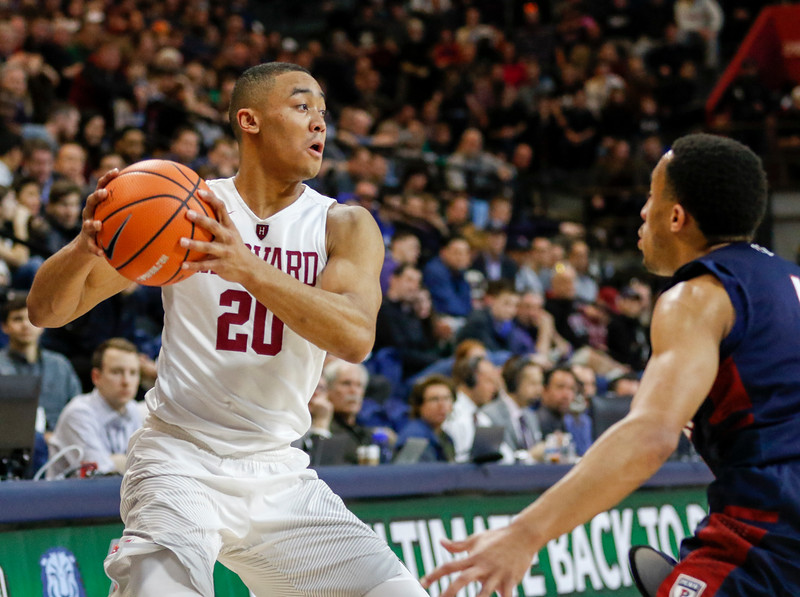 In what was a fitting chapter to the end of the Ivy league season, Harvard fell to Penn, 68-65, at the Palestra last Sunday By Timothy R. O'Meara
By Troy Boccelli, Crimson Staff Writer

Most would struggle to describe the ending of the Ivy League season at the Palestra.

Still, it would probably come short.

It would be missing the fact that Harvard’s late run and lead came after sophomore forward Seth Towns—fresh off Ivy League Player of the Year honors—went down with an injury. It would forget the two free throws and back-to-back threes from sophomore guard Caleb Wood that willed Penn to the late win. Absent would be the three from sophomore Christian Juzang just a minute after missing one badly to put the game within a possession with 47 seconds to go. It might leave out the fact that with five minutes to go and everything on the line, the Crimson’s lineup included two freshmen who hadn’t seen the floor extensively and a guard that was pushed into the starting lineup after sophomore guard Bryce Aiken—the previous season’s Ivy League Rookie of the Year—went down with a knee injury earlier in the season.

And that was just what happened on the court.

At some point the reader might be led to believe that there was no unimportant moment in the span of two hours at the Palestra. Perhaps they’d be right.

In the postgame press conference Penn coach Steve Donahue struggled to put words to it but settled on two—“Magical. Unexpected.”

And there could be more.

Some might call it an instant classic. Others might describe it as fit only for March. Some perhaps would say unfair and others would say it was a Sunday game at the Palestra at its finest. A good journalist would tell you the storylines abounded, and even the inattentive fan would find it hard to forget.

In a weekend when it would be difficult to steer clear of college basketball, the Ivy League conference championship was perhaps nothing more than a small rumbling in a building defined more by its past than anything. Even so, for those of us fortunate enough to spend the better part of four months watching from the sidelines, it was clear that this was another fitting episode in a building rightfully called the Cathedral of College Basketball.

Perhaps that would be the word—fitting.

The conference championship was many things and it wasn’t others. An objective onlooker might say the No. 2 seed in a conference tournament shouldn’t have home court advantage, but others—Harvard coach Tommy Amaker included—would tell you there’s no better venue in the nation.

“Is it somehow unfair a little bit in some ways to other teams in our league?” asked Amaker in the postgame press conference. “Maybe it is, but what an opportunity we have at that. To play in this conference tournament in the championship against a tremendous Penn team here at the Palestra. What an opportunity, what a win that could be.”

And that’s exactly what it was for both teams—an opportunity. It was a chance for Harvard and Penn to enshrine themselves in a building that has hosted more games, visiting teams, and NCAA tournaments than any other in the nation.

It would certainly be surprising to see the tournament continue on at the Palestra and as such it was a fitting end to the tournament’s two year stint there.

It was a season-long battle for a chance at the Big Dance between two teams that shared the regular season conference title and, in some ways, it was an abbreviated return to glory for both coaches—Donahue inherited a Penn squad that had underperformed for the better part of a decade after a tough stint at Boston College, while Amaker hadn’t seen a regular season conference title for two seasons after winning five in a row and making a statement wins at the NCAA tournament twice.

It was the dawn of a new era in the conference; after decades of the regular season conference champion earning the automatic bid, it was a fitting finish for two teams.

“This never happened,” Donahue said. “We won some league titles on the bus ride home—someone called us one the bus and told us we were league champions by the way.”

At the end of the day the truth of the matter is that the conference, much like the Palestra itself, is probably a bit past its glory days—a 16-seed for Penn in the tournament shows that more clearly than anything.

Sunday afternoon, though, with the sunshine coming down through the rafters, the two teams separated by a basket with seconds left on the clock, and the crowd on its feet, Harvard and Penn certainly made a bid for enshrinement in the Palestra’s past.