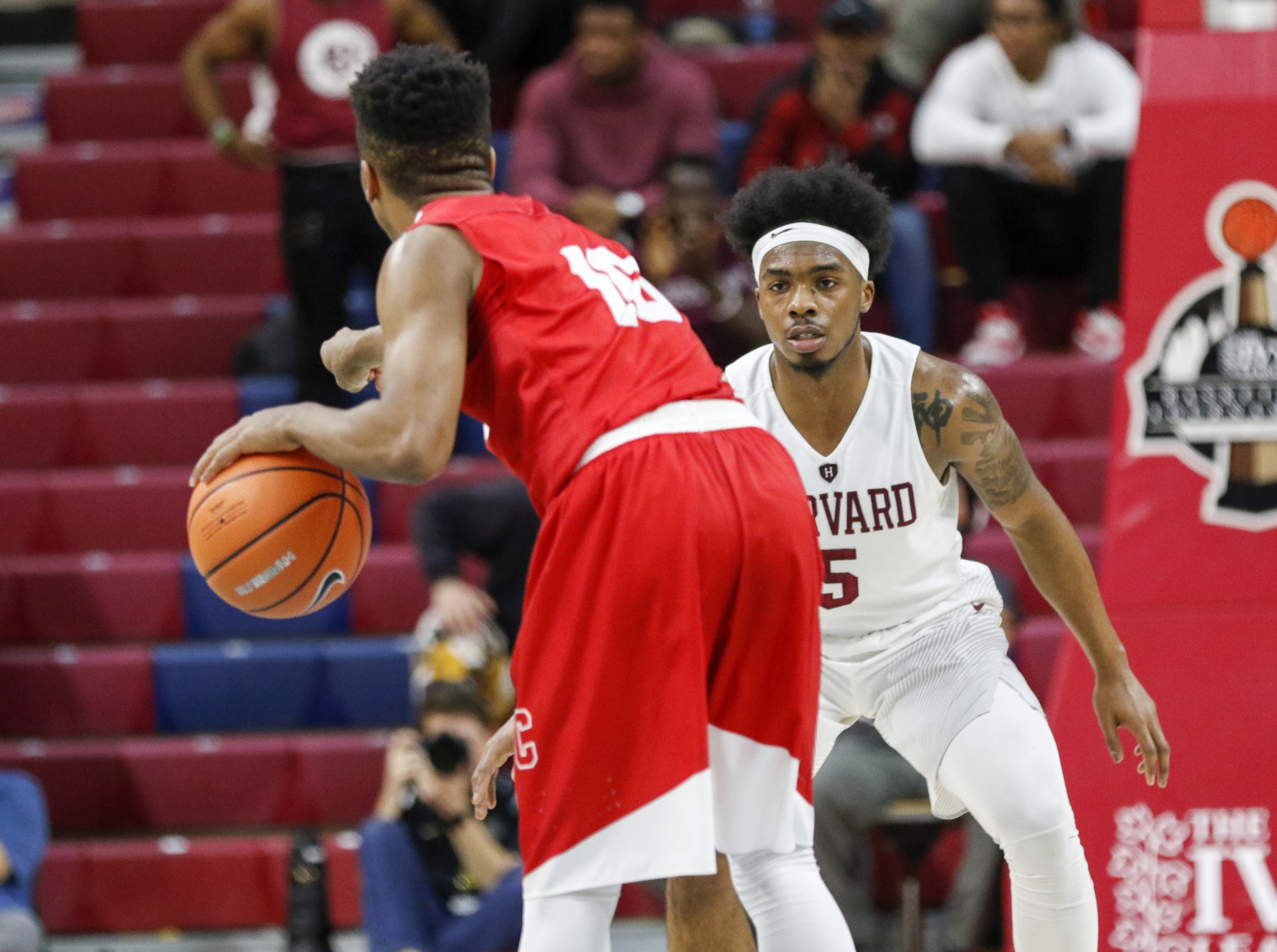 PHILADELPHIA—After struggling to find the bottom of the net for the first 15 minutes of game action on Saturday afternoon, the Harvard men’s basketball team pulled away from Cornell, 74-55, in the day’s first Ivy League Tournament semifinal. Sophomore forward Seth Towns led all scorers with 24 points while classmates Christian Juzang and Chris Lewis combined for 28 on 11-of-19 shooting.

The victory gives the Crimson a spot in Sunday afternoon’s Ivy League Tournament championship, to be played at the Palestra at noon. After holding a lead that grew to as many as seven in the first half, the Big Red (12-16) had no answer for Harvard (18-12), which stormed back for its largest win of the season.

“We’ve had some tough games with Cornell and give them so much credit for how their team plays," Harvard coach Tommy Amaker said. “I thought the difference was our ability to get on the backboard. One of the things we preach and talk about so much in our program through the years is our bench and our balance, I thought those were two big keys for us to push this thing through.”

The Crimson struggled mightily in the game’s first 15 minutes, relying on Towns for much of its offense while several of its key players struggled with foul trouble. Despite the shooting woes, Harvard flipped the script before intermission and never looked back. Two runs were largely the difference for the top seed on Saturday afternoon.

The first, a 16-4 stretch to end the opening half, was punctuated by a Juzang halfcourt shot to beat the buzzer. Harvard held Cornell to just two field goals over the last five minutes and made four of its final six shot attempts, including its last four three-pointers before the break.

“We talk about the momentum,” Amaker said. “I think that allowed us to put an exclamation point on a 14-4 run and that shot, it hurts if you’re on the other side, and we’ve been on the other side….I thought our kids were able to catch a little excitement and run with it.”

Despite the run, it was relatively remarkable that the Crimson entered the locker room with the lead. Harvard made just seven of its first 22 field goal attempts and committed seven personal fouls in the game’s first 10 minutes.

While the first stretch gave the Crimson a cushion heading into the break, the second run allowed Harvard to bury the fourth-seeded Big Red. This time around, the run was an 18-3 outburst that spanned for eight minutes down the stretch. The Crimson shot 6-of-10 overall, making two three-pointers and getting eight points from Towns. 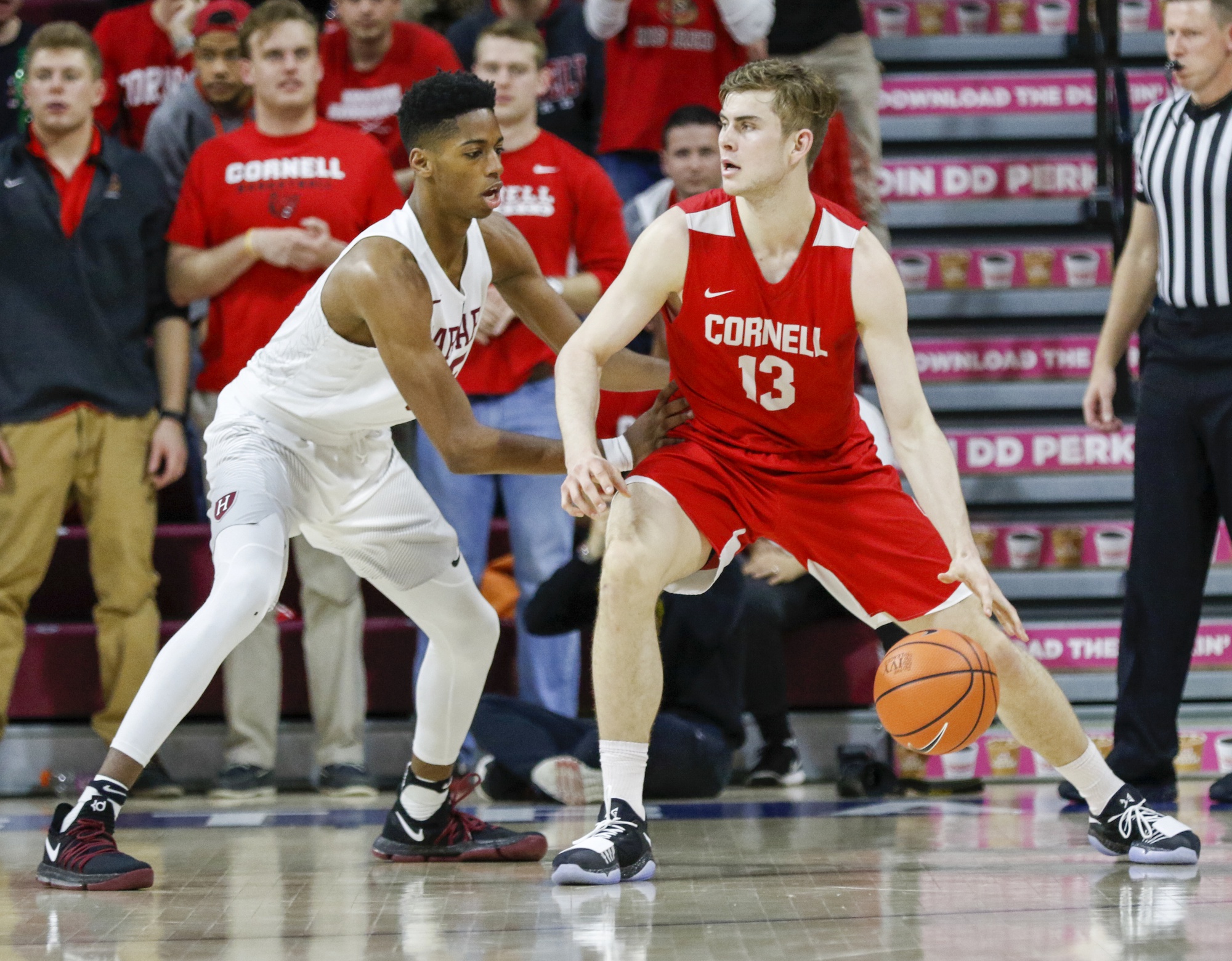 Since Amaker took over as head coach in 2007, Harvard has prided itself on defense. The Crimson led the Ivy League in opponents’ points per game during the regular season and was able to slow down Cornell for most of the afternoon on Saturday.

Juniors Stone Gettings and Matt Morgan had torched Harvard in the teams’ two meetings earlier this season. Gettings went for 32 points in Ithaca while Morgan finished with 34 last weekend in Cambridge. This time around, the Crimson was particularly successful in frustrating Gettings while holding Morgan to just 11 shot attempts, more than four fewer than his season average.

“[Gettings] knows how to play on the perimeter and inside,” Lewis said. “He’s very patient. He has a complete game and it takes the whole team to play him in a sense because you know he’s a good passer, you know he can play without the ball [or] with the ball.

Forcing Gettings into tough shots and denying Morgan the basketball made life miserable for Cornell coach Brian Earl and his role players. The Big Red only made eight field goals after intermission and shot 38 percent from the field. After Morgan scored seven of Cornell’s first nine points in the second half’s first five minutes to get his team back within five points, the Big Red would only manage 14 points in the game’s final 15 minutes.

“That was our emphasis in practice, guard people off the ball,” Towns said. “You know that’s [Morgan’s] bread and butter, to move off the ball and score, and he’s really good at it so we definitely practiced that.”