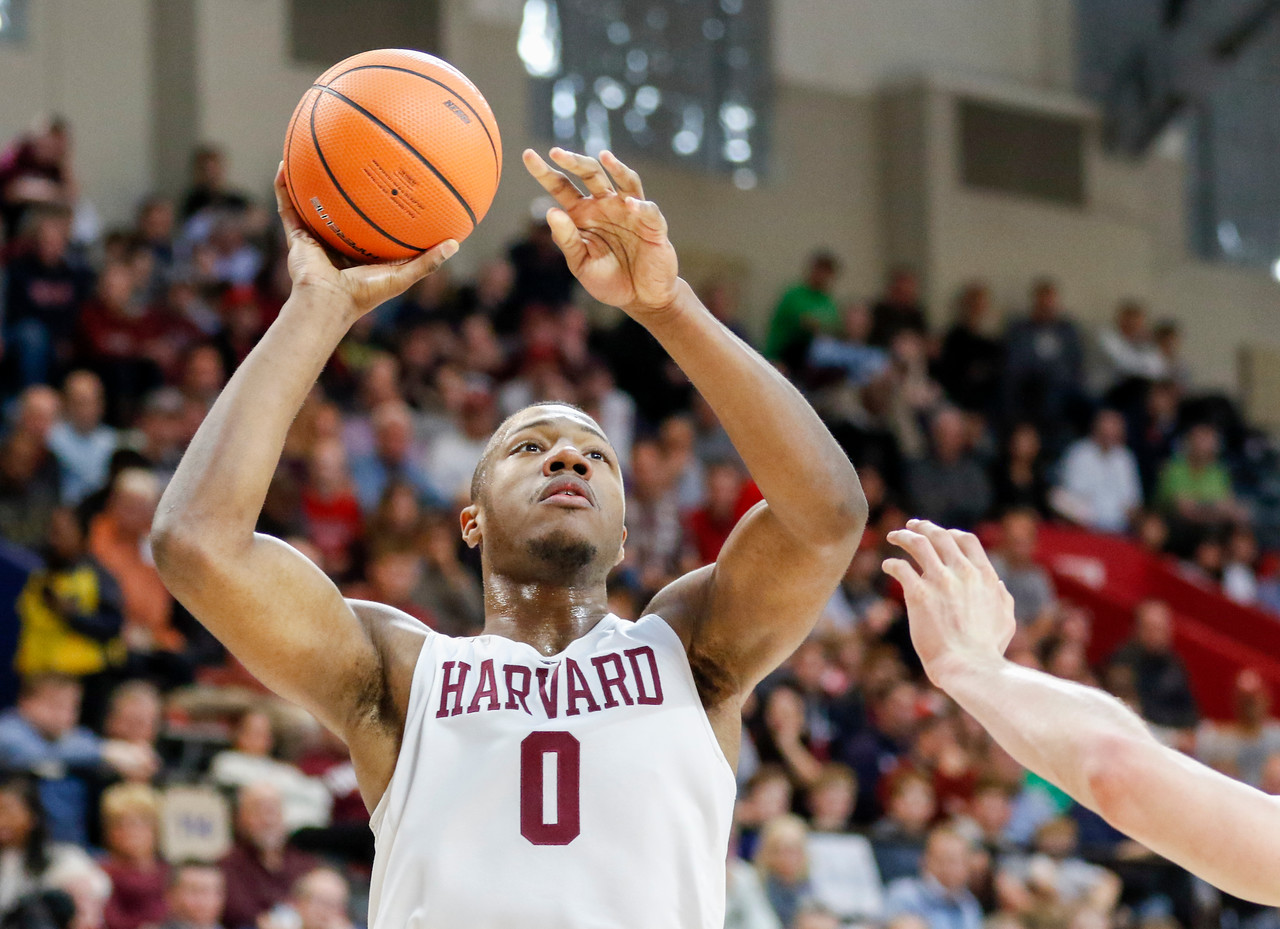 Sophomore Chris Lewis puts up a shot at the Palestra. The forward finished the game with a team-high 16 points on 7-of-15 shooting from the field. By Timothy R. O'Meara
By Stephen J. Gleason, Crimson Staff Writer

“I knew I wanted to get a quicker shot up to to give us a chance to offensive rebound and possibly get a second look,” Bassey said. “Just didn’t knock down the shot pretty much. Rio had a great offensive rebound, we had another good look in the corner from Juzang, just didn’t fall.”

Seconds after the final horn sounded, the Penn (24-8) faithful was storming the floor of the Palestra in celebration of the Quakers’ first NCAA Tournament berth since 2007.

“I thought they deserved it and we played our hearts out to give it the best effort we could give and came up a little bit short,” Harvard coach Tommy Amaker said. “I’m certainly proud of our team for the fight they put out throughout this season.”

After a frantic Harvard (18-13) comeback that lasted for much of the second half, Penn senior Caleb Wood knocked down a deep three to quell a 15-2 Crimson run and tie the game with 4:21 to play. Wood capped off a stretch of eight straight points for the Quakers by hitting another triple and putting his team up three as the clock read 3:42.

The lead was six with under a minute to play after an extended scoreless stretch from Harvard. After junior guard Corey Johnson took a charge on Penn junior Max Rothschild, Juzang drilled a three with 47.6 seconds to play to make it a one-possession game once more.

The fact that the Crimson stood a chance in the game’s final minutes was remarkable in itself.

The Quakers went into the locker room at halftime leading by two after senior guard Darnell Foreman nailed a buzzer-beating three. It was a fitting end to a record-setting half for the fourth-year. Foreman was unstoppable before the break, making six of his first seven field goal attempts en route to 19 points, the most by any player in a half in Ivy League Tournament history.

“Foreman’s a great player, he’s going to make tough shots,” Bassey said. “We talked about regrouping and responding at halftime and really coming together and making our run. They had a great run to end the half. We, at halftime, came together and really focused on how we can end their run and get a run of our own going.”

The Camden, N.J., native, playing in his final game at the Palestra, came into the half like a lion and went out of it like a lion. He was largely the only reason that Penn was still in the game after Harvard went on a 16-0 run to take a 13-point lead late in the first half. Foreman scored 11 of the Quakers’ first 13 points as the Crimson tried to pull away and then notched two more three-pointers to help spark a 13-0 burst from his own team to end the half. 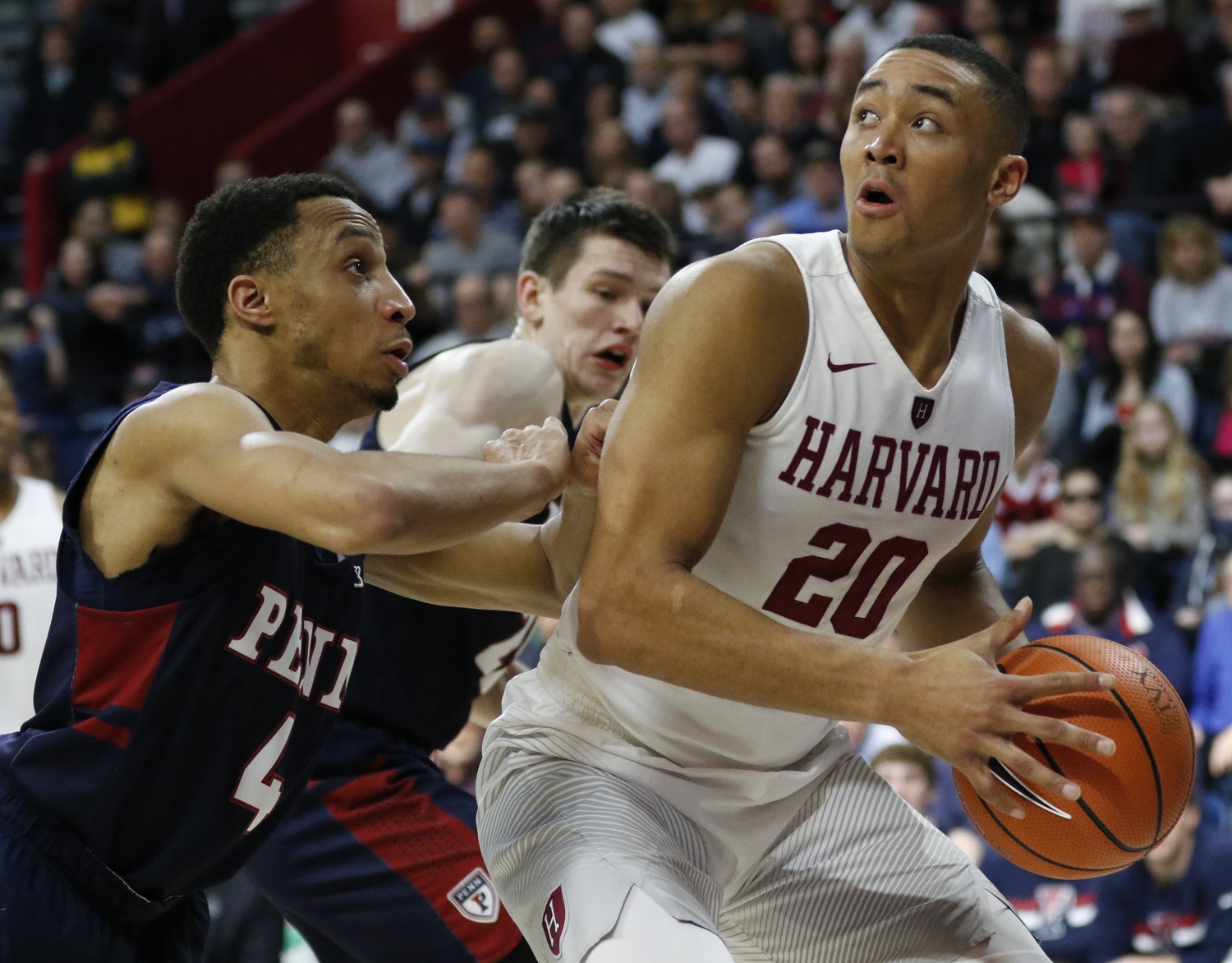 Justin Bassey drives in for a layup. The sophomore finished the day with 15 points on 5-of-7 shooting from the field. By Timothy R. O'Meara

“They’re a great team,” sophomore forward Chris Lewis said. “They stayed composed once we got a lead, they were patient when they got the ball, and they played their offense like their coach drilled into them. They went on a run, we went on a run, it was a game of spurts, and that’s just how it played out.”

Despite the 15-minute break for halftime, Penn did not take its foot off the gas after it emerged from the locker room. The 13-0 run snowballed into 11 straight points for the Quakers before the second frame’s first media timeout. Penn could not miss, making its first five second half field goal attempts, while Harvard could not buy a basket.

The Crimson went without a field goal for a nine-minute stretch that spanned both halves.

Sophomores Ryan Betley and AJ Brodeur helped Foreman dig Harvard’s hole. The trio combined for 45 of Penn’s first 48 points, and the Quakers were still shooting over 50 percent for the game with 12 minutes to play. Just when it looked like Penn was going to run away with its 24th trip to the NCAA Tournament, the Crimson began chipping away.

Much like it did during its 16-0 run in the first half, Harvard locked down defensively and its offense followed suit. After sophomore forward Seth Towns scored seven of the Crimson’s first nine points out of the break, classmate Chris Lewis took over, scoring six straight for Harvard to get his team back within eight.

“We stayed composed, we knew we we’re going to get some shots up,” Lewis said. “We knew as long we kept on staying composed, staying efficient, we were going to get on a run too. That’s just how we had to stay in the game, trusting each other, being tight, moving the ball.

As it looked like things were going the Crimson’s way, Towns went down with a knee injury that sidelined him for the final 8:20 of game action. At the beginning of the year, few people would have imagined that a rotation featuring freshmen Danilo Djuricic and Mario Haskett and Juzang—who played just 93 minutes a season ago—would be on the floor at the Ivy League Tournament. Even fewer would have predicted the gutsy stretch from that group that allowed Harvard to stay in the game over the final stretch.

“It’s obviously difficult, but we did it,” Amaker said. “We didn’t have [Towns] and we fought back and took the lead and still had the opportunity to win the game or to tie it to force overtime. He’s as good as he is and we know how good of a player he is for us...it certainly wasn’t easy.”

After Towns went down, Bassey went on a personal 6-0 run. The Denver, Colo., native made a three-pointer, corralled a loose ball on the other end, took it the length of the floor, and laid it in. The ensuing free throw got the Crimson within two and a pair of free throws from Juzang tied the contest for the first time since the teams were knotted at two. Harvard’s lead mushroomed to three but a scoreless stretch that lasted nearly four minutes allowed the Quakers to claw back to take the late win.

It was the second year in a row that the Crimson walked off the floor of the Palestra in dejection after falling short in the Ivy League Tournament. Harvard fell to Yale in the semifinals of last season’s tournament.

“I mentioned to them that I understand it, I’ve been there before, I’ve been in that seat before where they were sitting...to come up short in a big moment,” Amaker said. “I told them I feel for them and I understand, but we need to get our heads up and get our heads right and we’re hopeful that we’ll have a chance to continue to play this year in postseason.”

The NCAA Tournament appearance will be the fourth for Donahue. Penn completed a perfect season against conference opponents at the Palestra and has won 20 of its last 25 Ivy League games dating back to last season. The Quakers’ opponent will be announced at 6:00 tonight while the Crimson will find out its NIT matchup at 8:00.