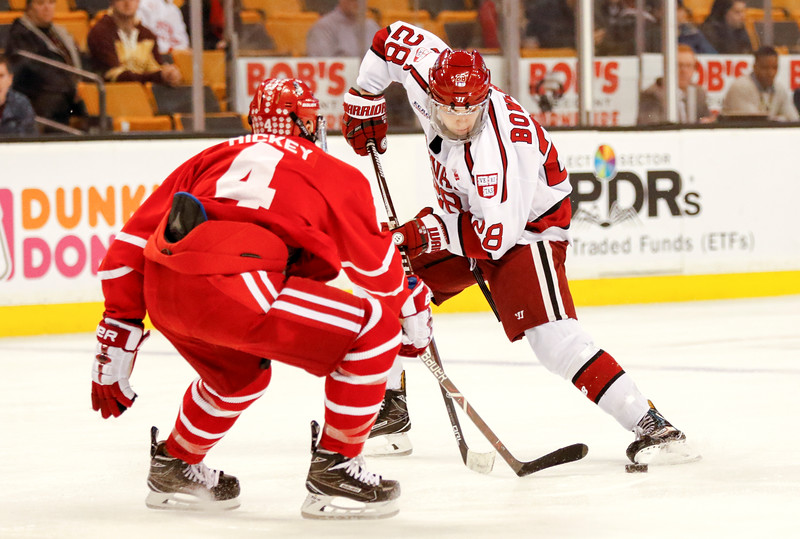 Returning from illness, freshman Henry Bowlby found himself on the receiving end of several breakaways through the game but was unable to bury his chances. By Timothy R. O'Meara
By Stuti R. Telidevara, Crimson Staff Writer

Nothing about the Harvard men’s hockey team’s 3-2 double-overtime loss to Boston University seemed surprising, at least not at first. Through the opening overtime period, momentum swung both ways as tired players on both sides were trapped in their respective ends.

The back-and-forth continued until one sneaky shot beat tri-captain netminder Merrick Madsen three minutes into the second overtime frame. Just like that, the Crimson’s hopes of defending 2017’s Beanpot title were shattered. The seemingly benign wrister came from the unlikely stick of third-line rookie forward Ty Amonte, who spotted twine through Madsen’s pads and decided to take his chance.

“It’s a little bitter,” junior forward Ryan Donato said. “You can’t say we didn’t put everything into that game…. [But] college hockey is a game of mistakes, and that’s how a goal is scored.”

For Harvard (10-9-4, 9-5-3 ECAC), the loss does not so much raise questions about Madsen’s performance in net, who stood tall (.928%) despite falling back to a .500 win percentage on the season. The team must instead confront a string of offensive issues that it began to fix over the weekend at Dartmouth.

WHO'S GOT THE POWER?

In Monday night’s Beanpot game against Terriers (15-11-2, 10-7-2 Hockey East), Harvard’s power play continued its recent struggles. Back in January, a weekend of shutouts at the hands of now-No. 3 Cornell and Colgate capped off the Crimson’s otherwise promising month. The pair of clean sheets gave rise to a growing problem on the ice: the squad’s power play (in)efficiency, just 9.4 percent that month.

While the team put forth a four-goal performance last Friday against the Big Green and appeared threatening on its 5-on-4 opportunities, the man-advantage failed to produce yet again.

In the Beanpot semifinal, Harvard failed to execute on any of its three power plays, lengthening its scoreless streak on man-up chances to 15 and placing its execution rate among the bottom-ten in the country (14.3%). This marks the program’s longest scoreless power play streak since the beginning of the 2013-2014 season, when the Crimson failed to convert on 17 straight chances over five games, going 2-2-1 in that time. During the current man-up slump, Harvard is 2-3-0.

“The first [power play] was not great,” said Crimson coach Ted Donato ’91 bluntly. “But I thought the next two, we had some good looks…[and] in overtime, [we had] some guys walking in the slot.”

The team was granted a power play in the middle of the first overtime frame—arguably its best chance to seize the victory. The second unit did force BU sophomore goalie Jake Oettinger to make some big saves, but, as has been the theme for Harvard recently, the puck just seemed to stay out.

“When it’s all said and done, they scored a goal on the power play and we didn’t,” coach Donato summarized. “It does seem to come down, in these big games, to special teams.”

Ryan Donato’s Wednesday morning departure for the Olympics only ups the urgency of the Crimson’s power play problem. With medal games in PyeongChang extending until Feb. 25, the junior has likely played his last game of the regular season. Donato, who leads the country with 21 goals, has been the offensive focal point of his team throughout the season, having a hand in two-thirds of Harvard’s man-advantage conversions.

Sheer shot volume broke the Terriers down in last year’s Beanpot final, as Harvard cruised to victory with a 40-17 shot margin. Though the contrast was not quite so dramatic this time around, the team had 49 shots to BU’s 42 and owned the second period with a 20-4 shot advantage.

Historically, the Crimson has excelled in shooting extravaganzas, posting a record of 8-5-4 when outshooting the opponent this season, coming into the game. The trends were on Harvard’s side two-fold, as the Terriers entered Monday’s win at 2-5 this season when outshot by an opponent and 0-1 when allowing 40-49 shots.

“I certainly didn’t feel good about our chances after the second period,” said BU coach David Quinn. “We looked tired and slow...because we were chasing the puck. ”

Nevertheless, as Harvard learned after a season-high 51 shots proved fruitless against Colgate, having chances is not the same as burying them. Though the team controlled the game’s middle frame, the Terriers held slim advantages in all four other periods and found net on the only shot—by either team—in the second overtime.

A major reason the 3-2 contest required lots of shots from both teams was the play of both goaltenders, who looked poised despite the onslaughts they faced. In the first overtime frame, Oettinger shut down the Crimson’s power play, including a Donato attempt from the side of the net and a left-circle shot from junior forward Lewis Zerter-Gossage. Not to be outdone, Madsen made a sprawling save on BU alternate captain and junior Jordan Greenway, snatching up a puck that bounced dangerously overhead.

“It doesn’t always look pretty,” said coach Donato of Madsen’s scrambling overtime saves. “But [the Terriers] have some pretty dangerous guys.... You got the sense that on either end it was going to be a little bit of a strange goal, because both goalies were really dialed in there.”

NEW KIDS ON THE BLOCK

The Beanpot has a tendency to birth new stars, and despite the bright lights, rookies showed up big on Monday night. Three of the game’s five goals were potted by players suiting up for their first ever Beanpot game—the Crimson’s by freshman Jack Badini, and BU’s courtesy of rookies Logan Cockerill and Amonte.

While Donato (5 GP, 3–1—4) leads the Crimson’s active Beanpot scorers, rookies performing is no surprise for Harvard or the Terriers. Now-sophomore Nathan Krusko earned tournament MVP honors last season for coach Donato’s squad, while BU’s freshmen have contributed 36 percent of the team’s points, netting 33 of 89 goals, this season. Plus, when BU faced Harvard last year, all three Terrier tallies were scored by freshmen.

The scoreboard isn’t the only place that rookies made an impact. Returning from illness, Crimson forward Henry Bowlby made his first Beanpot start on Monday, playing on the wing alongside tri-captain Jake Horton instead of his usual centerman, Donato. While Bowlby did not find the net, he shot off to several breakaways during the game, and had four shots on goal.

Though one-goal leads are far from insurmountable, the Crimson might have balked at BU’s early goal given its performance this season. Harvard is 1-6-3 when trailing after the first frame, as it did on Monday night, as opposed to 9-1-0 when leading. The team’s only comeback win this season came on Jan. 20 against St. Lawrence, who at the time had not won a single conference game.

The Terriers, meanwhile, are unbeaten all season (11-0) when they leave the ice ahead on the scoreboard after 20 minutes. Until a 3-2 loss against UMass Lowell on Dec. 8, the team was 29-0-3 in games when taking a lead into either intermission.

Firing early and often has been a theme of BU’s recent success. Cockerill’s first-period power play tally capped off the team’s streak of scoring at least one goal in 14 straight periods before the Crimson held the Terriers off the scoresheet in the second frame.