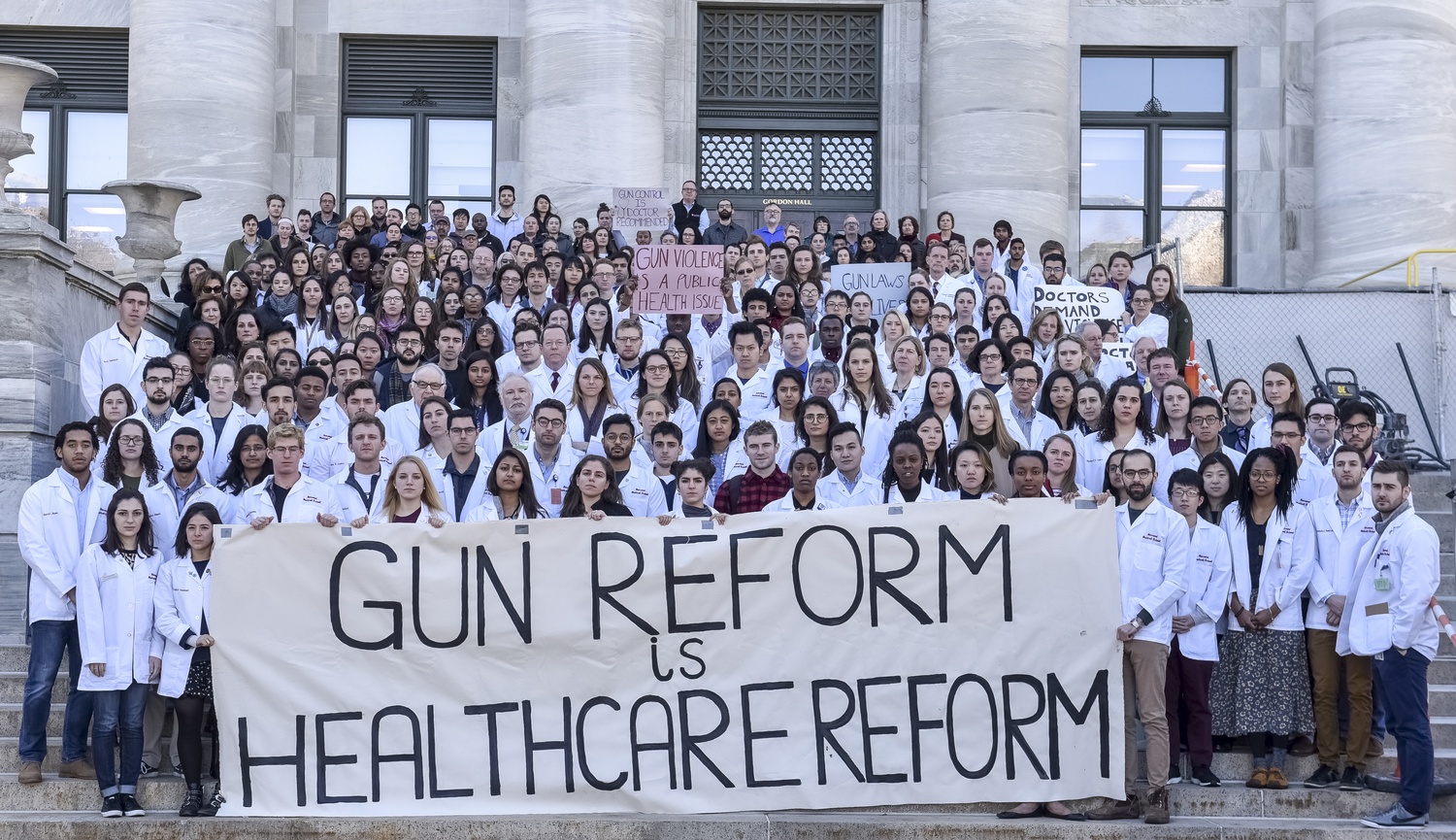 Students at Harvard Medical School and the School of Public Health joined affiliates of Harvard’s teaching hospitals to take a group photo protesting gun violence in the wake of a Parkland, Fla. school shooting that killed 17 people.

They assembled Tuesday afternoon in front of Gordon Hall on the campus of Harvard Medical School, where they were photographed holding a banner that read “Gun reform is healthcare reform.” Individual students held signs that read “Gun control is doctor recommended” and “Gun violence is a public health issue.”

Shivangi Goel, a co-president of the HMS Class of 2021 student council, organized and spoke at the event.

“Medical providers and scientists devote their whole lives to ameliorating the lives of their patients. It seems ridiculous that guns and people with guns can undo all of that, and hurt those who we work desperately each day to save,” she wrote in an email.

Goel also wrote that in her first two years as an emergency medical technician, she saw two patients who were victims of gun violence—one died, and the other sustained severe injuries.

“Since then I have been a staunch believer in the idea that saving lives will always matter more to me than protecting guns,” Goel wrote.

Chana A. Sacks, a doctor at Massachusetts General Hospital, spoke after Goel. Sacks’s cousin was killed at Sandy Hook Elementary School in Newtown, Conn. in 2012.

She called on healthcare professionals to ensure that gun violence stays in the headlines even when memories of the most recent mass shooting have faded, according to a press release from the School of Public Health.

The students are not the only people in Longwood advocating gun reform: After the Parkland shooting, School of Public Health Dean Michelle A. Williams wrote a letter to school affiliates calling for more gun violence research.

Both Williams and Goel took a stance against the Dickey Amendment, a 1996 stipulation that the Centers for Disease Control and Prevention cannot “advocate or promote gun control.”

According to Goel, the students plan to continue their activism next month, with a walk-out on March 14 and the Boston “March for Our Lives” demonstration on March 24.