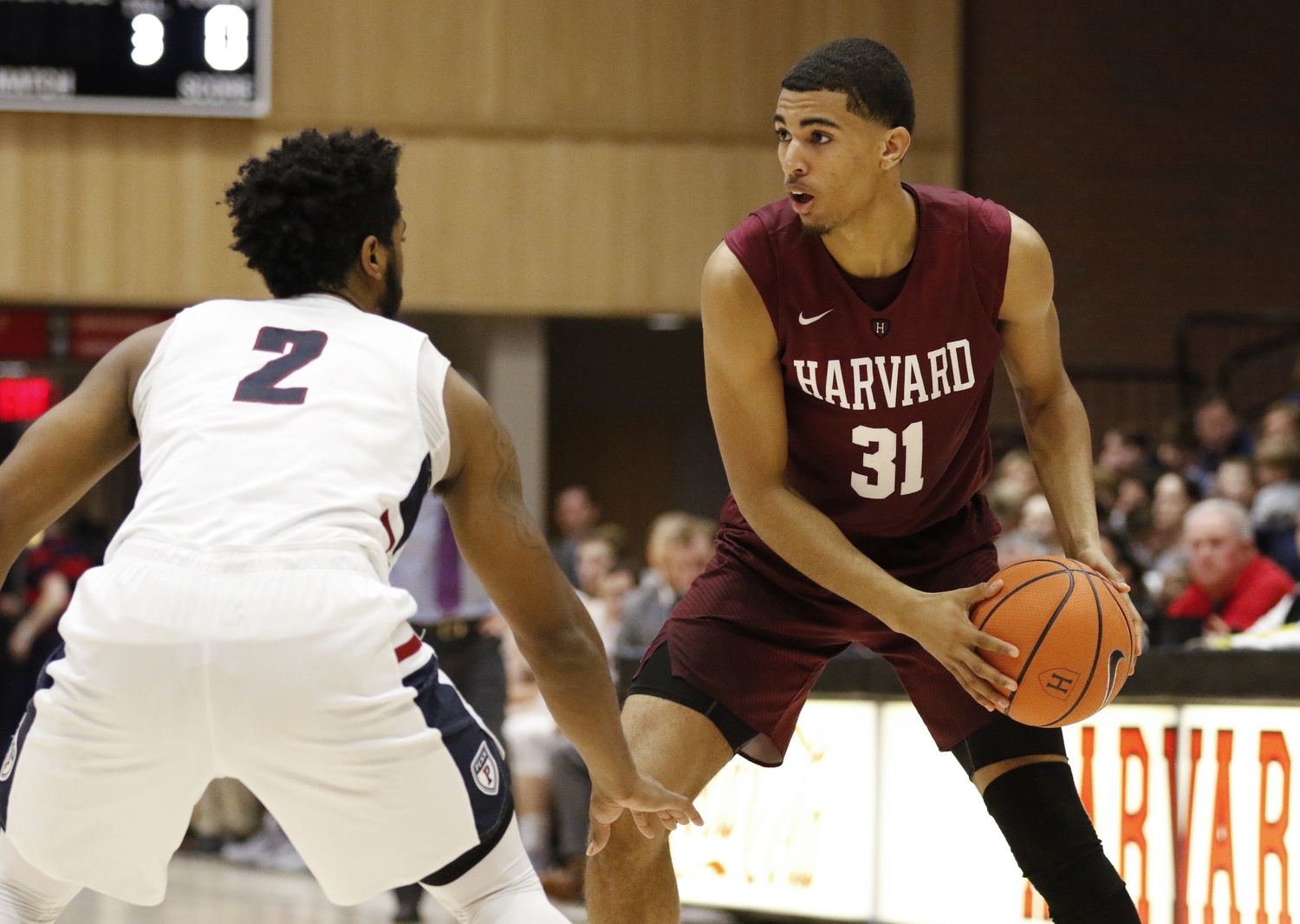 There are many things in Ivy League basketball this season that haven’t made a lot of sense—Harvard’s strong play despite an injury to star point guard Bryce Aiken, the parity that has consumed the middle tier of the conference, and Columbia’s decision to host 90’s Greek Night at its game last weekend—but perhaps the most perplexing has been the performance of Mitch Henderson’s Princeton Tigers.

We’ll be the first to admit, we got this one very wrong. Entering the season, Princeton looked like it would be right back at the top of the conference, jockeying for the Ivy’s at-large bid with Harvard, Yale, and maybe Penn. With just two weekends left to play before the Ivy League Tournament, the Tigers are sitting alone. In seventh place. Princeton is in freefall after losing its last six games, including a 16-point loss to lowly Dartmouth, a 25-point shellacking at the hands of Columbia, and two contests in which it conceded more than 100 points.

‘Why is this so unusual?’, you might ask. Well, whatever the opposite of a wildcard is, Princeton typically fits that bill. The Tigers have been a model of consistency in the Ivy League since Henderson arrived back at his alma mater in 2011. The team has finished above .500 in Ancient Eight play in each of Henderson’s six seasons at the helm (and its last nine overall), winning 10 or more conference games four times in that span.

For the last several years, the Tigers have prided themselves on its balance and playing within itself. While Princeton wasn’t always the flashiest or most talented team in the league, it was rarely going to beat itself or take games off. Entering the season, the Tigers had gone 13-6 in its last 19 Ivy League contests that were determined by five or fewer points, and had not lost a conference home game since Valentine’s Day in 2015. Even though Princeton graduated one of the most accomplished senior classes in recent history after last season, the 2017-2018 campaign was not supposed to be one characterized by rebuilding.

The Tigers entered the season returning their three best guards from a team that ran the table in the Ivy League and nearly upset Notre Dame in the first round of the NCAA Tournament. Amir Bell, Devin Cannady, and Myles Stephens each logged over 23 minutes per game while the latter two each posted double-digit scoring averages a season ago. In addition to his success on the offensive end, Stephens was also last year’s Ivy League Defensive Player of the Year.

Fast-forward eight months and the 2017-2018 campaign started off about as well as Princeton fans thought it could. It topped USC on the road and had close losses to BYU and Butler in nonconference play. After losing to Penn to kick off its Ancient Eight slate, the Tigers then rattled off convincing wins at home over Columbia and Cornell before topping Yale in overtime.

However, the train really started coming off the tracks a few weeks ago and some of the individual statistics are pretty wild. Princeton’s three musketeers are certainly getting theirs. Cannady is third in the conference in scoring and is shooting nearly four percentage points better from the field than he did a season ago. Stephens has remained a steady hand on the defensive end while also shooting over 50 percent from the field. Bell has been scoring more in 2017-2018 while also averaging over five rebounds a game to go with almost four assists. You would think that the Tigers would be able to put a few big men and role players in place and then let Bell, Cannady, and Stephens do their thing. You would be dead wrong.

Sure, there have been surprises this season in conference—Yale has struggled at times, but a lot of it can be attributed to injuries and youth, Penn and Harvard have jumped to the top of the conference earlier than experts may have expected, but Princeton, we’re not really sure what happened. You put Bell, Cannady, and Stephens on literally any other Ivy League team and they’re a top four club in the conference for sure.

To say that Bell, Cannady, and Stephens have not gotten much help is the textbook definition of understatement. All three of the upperclassmen average over 33 minutes per game—no other Princeton player logs more than 20 per night. Bell, Cannady, and Stephens account for 58 percent of the Tigers’ points, 51 percent of its rebounds (despite all being guards), and 53 percent of its assists. For context, every guard on Harvard’s roster has combined for 44.1 percent of the Crimsons points and, as is the case for most teams, the forwards for Tommy Amaker’s team take care of the majority of the team’s rebounding needs.

But it’s not like the other 14 players have to do very much. Normally when your big men can’t score, they can at least rebound or block shots or take up space on defense. Princeton’s big men don’t really do any of those things. A year after holding its opponents to 61.4 points per game, the Tigers are conceding 72.3 points per contest. Princeton is dead last in the Ivy League in offensive rebounds and second-to-last in defensive rebounds.

Here are some more stats for you: freshman forward Sebastian Much is 6’8” but has almost as many rebounds (45 in 25 games) as he does turnovers (43). Henderson’s starting forwards average just 4.1 rebounds per contest and its entire frontcourt has attempted just 110 free throw attempts all season. For context, Harvard sophomore guard Bryce Aiken attempted 83 free throws on his own in just 14 games. The Tigers’ forwards literally stand under the basket but can barely corral a rebound or draw contact when attempting a layup.

While we completely disagree with the fact that Spencer Weisz (fourth on his team in scoring, 21st in the conference; 12th in the conference in rebounding, second in assists) was named Ivy League Player of the Year a season ago, Weisz is was a perfect encapsulation of everything that makes Princeton basketball Princeton basketball. He was consistent, didn’t do anything exceptionally well but did a little bit of everything to help his team win. Right now, Bell, Cannady, and Stephens sure wish someone could score or pass or rebound half as well as Weisz and his classmates could.

Now to the picks:

In a turn of events likely not atypical for those who call New Haven their campus, WYBCx, Yale’s student radio station, recently discovered that it did not have licensing agreements for any of the music it had been airing.

The president of the organization, Emma Keyes, went so far as to write in an email, “Seriously, we have been operating illegally since 2008.”

You couldn’t make this stuff up.

While the radio is shutting down operations for the time being, in a positive turn of events for Yale, senior guard Makai Mason is up and running for the Bulldogs—he had in fact not been operating illegally since 2008, but instead had a stress fracture in his foot.

Mason’s return to the hardwood would be drowned in chants of “safety school” here in Cambridge last Saturday as Yale scored a season-low 49 points in a loss, but his return bodes well for the Bulldogs. Sitting at 5-5 in conference with a wide open race for the third and fourth seeds, Yale could really use this win.

And maybe a licensing agreement, too.

It would be difficult to underestimate the impact of the Columbia University Marching Band on this matchup.

The Lions' band might be among the best in the conference coming into Friday night’s contests—not only do they play the most harmonically offensive version of Taylor Swift’s “I Knew You Were Trouble” but they also do this strange thing where they kind of speak the words to Mr. Brightside really fast as an opposing player takes a free throw.

The numbers speak for themselves—as it stands Harvard and Penn lead the conference with a single loss each. Penn’s loss is to Harvard and the Crimson’s lone loss is to Columbia on the road.

The band was undoubtedly the culprit of that road loss for Harvard.

In anticipation of the matchup, it would be important to take a look at the band’s scouting report on Brown. Notably in Article Eight and Seven-Eighths of its constitution, the Columbia band notes, “Brown is a bunch of letter-writing cowards.”

We’ll take their word for it.

It’s a tradition almost as archaic as Princeton is.

As we write this, the Tigers sit in an uncontested seventh place spot in conference despite being picked as the preseason favorite to finish third.

Just a year ago, this matchup came down to a buzzer-beater from Amir Bell in front of a sold-out crowd at Jadwin. If it is as close this year, we’ll swallow our pride and take back everything we said about Jersey.

Ah, the perennial battle for four-seed at the Ivy League tournament.

Not really—at least not the perennial part.

For those of you stuck under a rock, the Ivy League became the last in Division I conference to add a conference tournament last year. Two years ago, this would have been a meaningless game between two teams that enter the weekend with 4-6 records. Now, this might be one of the most important contests of the year. It’s great, really.

For its part, Cornell has about two and a quarter players who can score on its roster. Brown, meanwhile, takes the award for the worst combined shooting form amongst its starters. This one will be a nail biter for sure.

Last week, we mentioned that in what was likely a defining moment for the Dartmouth community, a Domino’s was set to open in Hanover.

Given that the Big Green is on the road though, and probably without its now steady diet of $5.99 large two-topping pizzas and cinnamon sticks, we’re going to have to give the home team a slight advantage.

This one is just for pride at this point. Both teams have clinched the top two seeds in the conference tournament and, to be quite honest, there likely isn’t too much of a difference between Yale and any of the other teams duking it out for the four-seed these last two weeks.

But it matters just enough.

Last year, the Crimson rode a two-game losing streak into the inaugural conference tournament. Both came courtesy of the Killer P’s and both came on buzzer-beaters. While this may not be the final act of the conference season, this one matters.

This game will more than likely be the conference championship game and we’ll bet neither team wants to lose it.

For its part, Yale has a guy with a cool name in Makai Mason. Columbia has a great marching band.

We take the band every time.