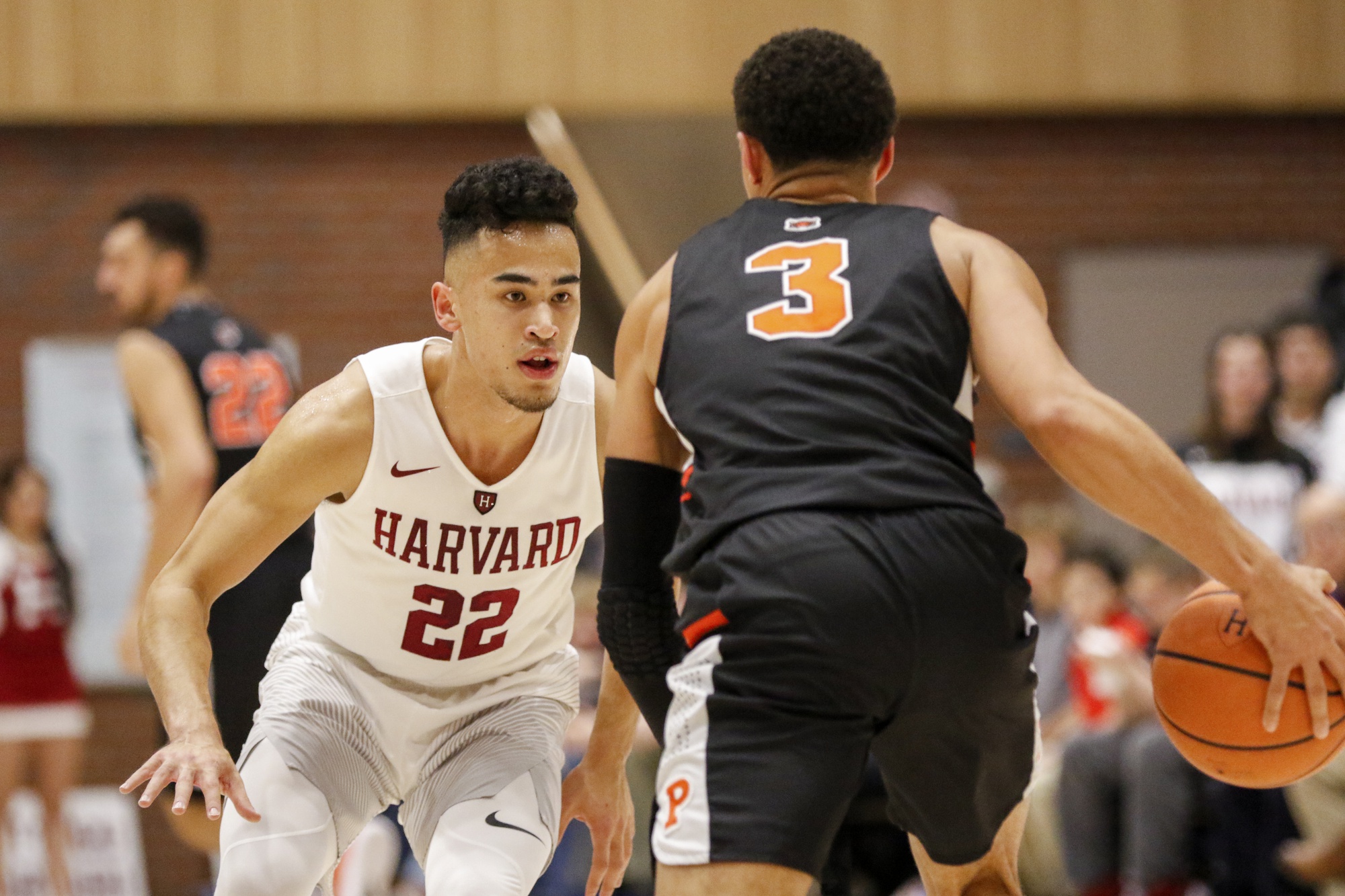 Sophomore guard Christian Juzang topped his previous career high from a week ago with 21 points in Friday's 65-58 over Brown. By Timothy R. O'Meara
By Troy Boccelli, Crimson Staff Writer

It was a gritty effort right until the end on Friday night.

In a game that saw neither team lead by more than three possessions, Harvard ultimately came out on top against a visiting Brown squad at Lavietes Pavilion. Though the Crimson would lead for nearly the entire contest, neither club could seem to find its way offensively, as the Bears shot 38 percent on the night while Harvard would hardly best that mark, shooting 40 percent from the field.

Behind a career-high 21 points from sophomore guard Christian Juzang, though, the Crimson edged out Brown, 65-58. The 58 points were a season-low scoring total for the Bears.

Though the Crimson would struggle at the line for much of the night, a pair of made free throws from Juzang and another set from sophomore forward Seth towns would ice the game late as Harvard earned its eighth win in conference.

Despite Brown coming off of a 91-point effort against Columbia the week before, Harvard’s defense slowed down Brown’s league-leading offense early and often.

Through the first frame, the hosts held the Bears’ high-scoring offense to just 25 points on 34 percent shooting from the field.

Despite slowing down Brown’s offense, the Crimson also struggled to find the bottom of the net, shooting 30 percent through the first frame. Behind a strong effort on the offensive glass and timely threes from Juzang and Towns, however, Harvard held onto an early lead.

“Both teams I thought struggled to get any kind of rhythm.” Harvard coach Tommy Amaker said. “I thought it was pretty obvious that neither team could get into a nice flow and rhythm, we had a few moments where we had a two-possession cushion and then could never really push it much further”

Tasked with defending Brown freshman guard Desmond Cambridge—the second-leading scorer in the conference—sophomore guard Justin Bassey came through for the Crimson on the defensive end.

After dropping a game-high 23 points in his team’s win against the Lions last week, Cambridge was held to just 10 points on 4-of-15 shooting from the field—the freshman’s lowest scoring total in nearly a month. With Bassey defending him for much of the contest, the Nashville native also struggled from beyond the arc, going just one-of-eight on the night.

“Justin’s a tough kid and he gets that assignment every game, the top offensive player on the perimeter,” Amaker said. “Just a tremendous effort from him with all the guys we have to go against and every time that he’s effective like he is against these kind of really good scorers, our chances increase dramatically to have a chance to win.”

The Crimson defense has held opponents to a league-best 66.5 points per game, a mark good for 44th best in the nation.

“They’re a really good offensive team, they normally average [78.7] points a game [entering Friday] and we held them to 58 so we did a lot of things right defensively and that’s our identity and our calling card,” Amaker said. “We knew that holding this team down would take a lot.”

AT THE LINE AND BEYOND THE ARC

Though Harvard has shot relatively poorly from three for much of the season—shooting just over 30 percent on the season—the long ball was one of the Crimson’s strong points on Friday night.

After going without a field goal for nearly five minutes during a stretch early in the first half, Harvard’s sharpshooters came alive to give Harvard an early cushion.

In contrast to one of its strong points throughout the season, the Crimson struggled to convert on opportunities at the line. The hosts went 17-of-26 at the line on the night. The nine missed free throws mark the most that Harvard has missed in an outing since missing 10 against MIT back in November.

“I think one of the major keys, and we talked about it before the game was who’s going be able to do the better job at the free throw line in terms of getting there and certainly converting,” Amaker said. “I knew we got a few there late based on them trying to foul us but I thought our ability to utilize the foul line was a big difference for us.”

For the Crimson, the difference at the line would be Towns. The sophomore would go to the line 12 times, converting on nine of those.

“We each have role cards and one of my roles is to get to the free throw line,” Towns said. “That’s always been a focus, I haven’t been doing it well throughout the season, but especially with the way they were calling it and how aggressive the other team was trying to deny the ball, you got to take advantage of it so I felt that was the easiest thing to do.”

The Columbus, Ohio native finished the night with a game-high 22 points on 6-of-16 shooting from the field and 3-of-5 from deep.

—Staff writer Troy Boccelli can be reached at troy.boccelli@thecrimson.com