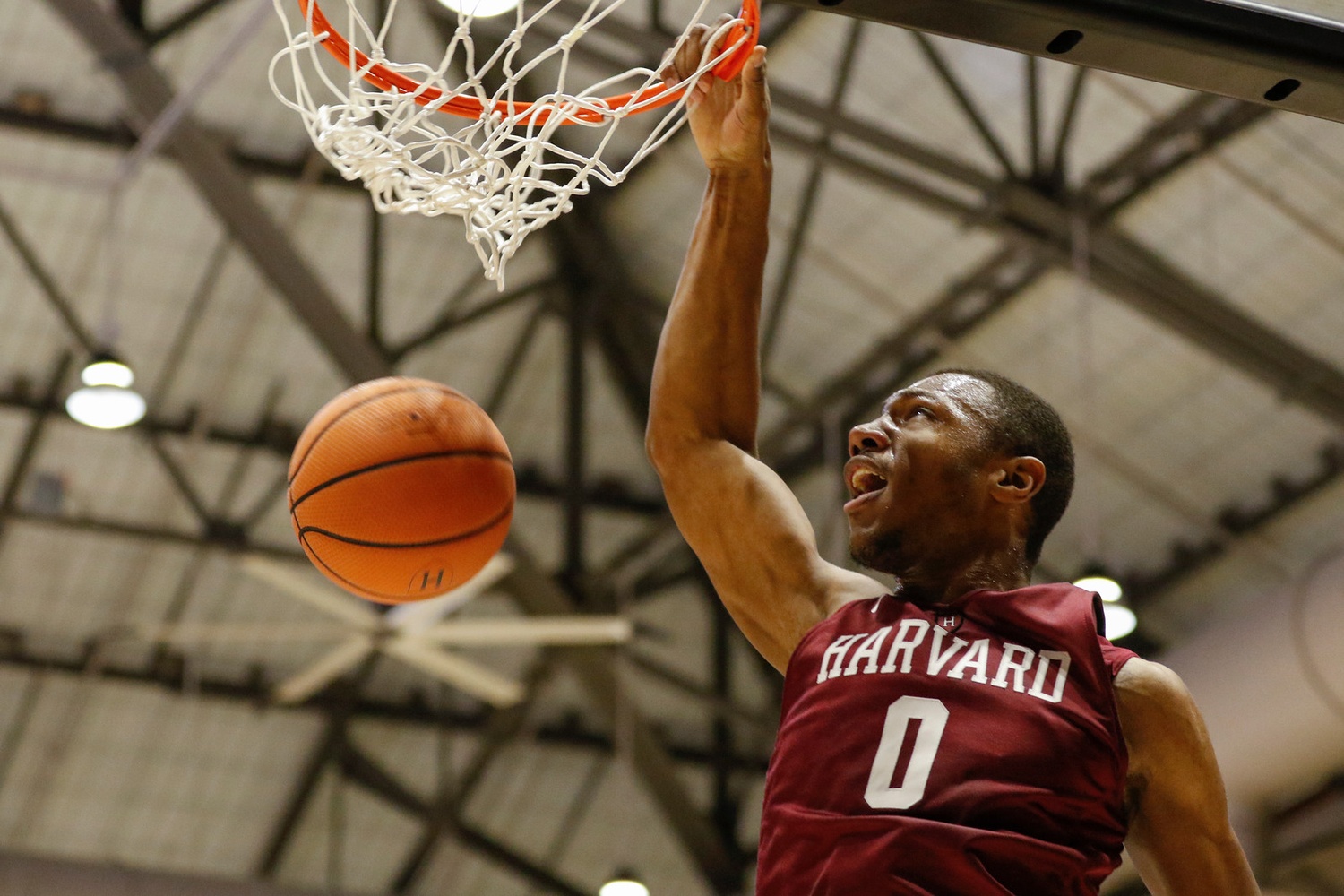 Sophomore forward Chris Lewis scored 14 points in the first 11 minutes of the first half during Saturday night's win against Yale. By Timothy R. O'Meara
By Troy Boccelli, Crimson Staff Writer

With 4:34 left to play in the first half and 19 seconds on the shot clock, sophomore forward Chris Lewis caught a pass just short of the free throw line.

Having scored 14 points through the first 11 minutes of the contest, the Yale defense collapsed onto the 6’9’’ forward, but not before he found a cutting Danilo Djuricic to his right. Lewis made the pass and his freshman teammate laid in the ball in over a Yale defender to give Harvard its largest advantage of the night at 31-10.

The layup from the freshman not only capped a 17-0 run from the Crimson, but also extended a scoring drought the Bulldogs to nearly nine minutes.

A minute later Yale would finally score on a layup from junior guard Alex Copeland, but the Bulldogs (12-14, 5-5 Ivy League) would trail the rest of the way as Harvard (14-11, 9-1) would come away with the 64-49 win on Saturday night at Lavietes Pavilion. The win also clinched Harvard a spot in the conference tournament in March.

“I thought our first half defensive effort was outstanding,” head coach Tommy Amaker said. “I thought we guarded really well and had a mindset of really wanting to defend. That is a part of our identity.”

The 49 points from Yale marked a season-low while its 32 percent clip from the field marked the Bulldogs’ second-worst shooting performance of the season—second only to its 30 percent mark when the Crimson visited New Haven three weekends ago.

For Harvard, the offensive outpouring began early and came largely from Lewis. The forward scored the Crimson’s first eight points on a perfect four-of-four shooting to get Harvard off to an 8-2 lead just under three minutes into the game.

“It was just the feeds that the guards gave me,” Lewis said. “After I made the first one, I started feeling good and my teammates trusted me and they kept tossing it to me. They gave me great passes, great angles and it made it easy to score.”

In 34 minutes of action the sophomore finished with a game-high 18 points and 10 rebounds. The effort marked Lewis’ fourth career double-double.

To add to the offensive effort, the Crimson had what might be been its best offensive showing of the season through the first half. For a period of over 10 minutes from the 13:30 mark to Copeland’s layup at 3:20, Yale failed to put a point on the scoreboard. The Bulldogs made just five shots through the half, shooting just 23 percent for the frame.

“Defensively, we were getting stops, no second chance points for them and we were really just controlling the pace of the game and playing our kind of basketball,” junior guard Corey Johnson said. “It really showed in the first half, we were firing on all cylinders.”

Tasked with defending one of the conference’s best offensive players in sophomore guard Miye Oni, sophomore guard Justin Bassey rose to the task. Oni would finish the night with just seven points on 2-of-10 shooting from the field.

The offensive outpouring and gritty defense from Harvard early on would gave way to a much closer second half.

Behind some early baskets from Copeland and junior forward Blake Reynolds, Yale slowly cut down what was a lead as large as 21 in the first half. With 10:13 to play, freshman forward Paul Atkinson went to the line after being fouled by sophomore forward Seth Towns. The freshman made both to put the score at 47-38.

Nine would be as close as the Bulldogs would get, however, as a long three from sophomore guard Christian Juzang would extend the Crimson’s lead to 15 just over two minutes later.

Coming off of a career-high 21 points against Brown the night before, the Juzang followed up with another standout performance. The second-year added 13 points on 5-of-10 shooting from the field to go with a career-high eight assists.

“I think [Juzang] has been playing tremendous basketball,” Amaker said. “Really proud of how he’s been able to come in and take the reigns of the team as our quarterback, still have an aggressive mindset and also being really savvy and smart about when to pick his spots.”

The night also saw the return of captain Makai Mason for the Bulldogs. The senior guard had not seen action in nearly two years following Yale's first NCAA tournament berth since 1962 back in 2016.

The Crimson would spoil the senior’s return to the hardwood, however. Mason finished the night with eight points on 2-of-6 shooting from the field in 21 minutes. With the clock expiring and the game decided, the former Ivy League Player of the Year went to the line and missed a late free throw behind chants of “safety school” in the background.

“Our kids were doing exactly what we wanted,” Amaker said. “When it bears fruit like that, it is a huge shot in the arm for our guys.”