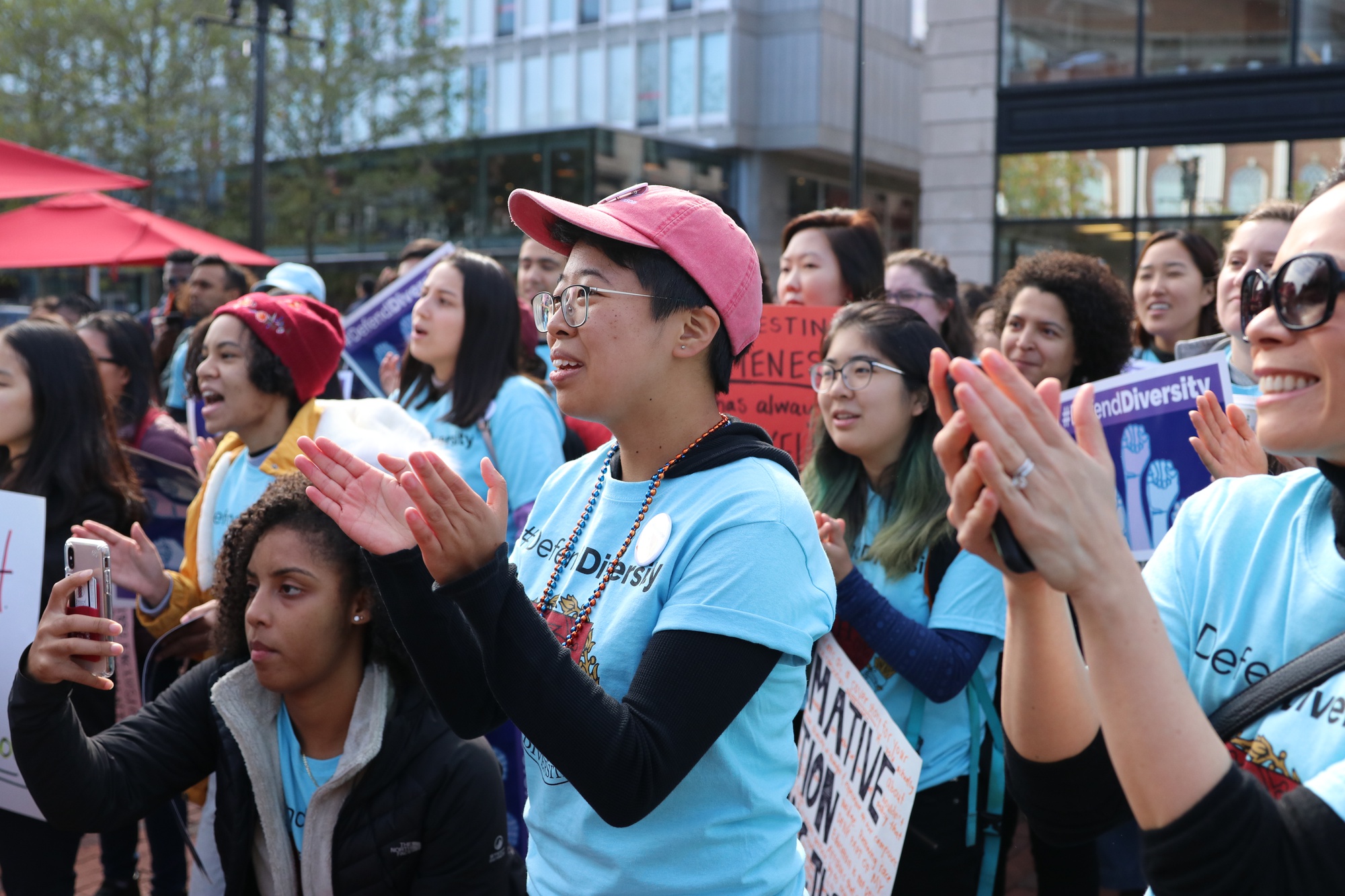 Sally Chen '19 came up with the name for the #DefendDiversity rally, held at the Harvard Square Pit on October 14th, the day before the admissions trial began.
By Camille G. Caldera and Sahar M. Mohammadzadeh, Crimson Staff Writers

The admissions lawsuit that could shape the future of affirmative action at schools across the country escalated in 2018 as Harvard and plaintiff Students for Fair Admissions sparred over allegations of anti-Asian-American bias in the College’s admissions process during a high-profile three-week trial this fall.

The trial marked the culmination of a year filled with increasing debate about affirmative action at the College and scrutiny of Harvard’s famously selective, and secretive, admissions process.

In April, federal Judge Allison D. Burroughs ruled to release thousands of pages of admissions documents to the public, though lawyers representing Harvard had previously argued that some of this admissions data should remain under seal.

The admissions data, detailed in filings made by each side in June, showed that Harvard hopefuls receive numerical ratings ranging from 1 to 6 on factors including academic promise, athletic ability, and extracurricular involvement. Applicants also receive a “personal” score, which rates them on qualities including “humor” and “grit.”

The court documents also revealed that a 2013 internal Harvard study concluded that Asian American applicants received lower personal ratings than applicants of other races. The filings also confirmed the existence of the “Z-list” and showed that legacies — the children of Harvard or Radcliffe College alumni — and recruited athletes often receive a boost in the admissions process.

At the end of July, every Ivy League university, 25 campus affinity groups, the NAACP Legal Defense and Education Fund, and the American Civil Liberties Union submitted amicus briefs to the court that supported Harvard’s position. The Asian American Coalition for Education filed a brief siding with SFFA on behalf of 156 Asian-American organizations.

The Department of Justice also weighed in, filing a “statement of interest” in August that argued Harvard perpetuates “unlawful racial discrimination” against Asian American applicants.

Prior to the trial, both sides rallied their supporters in dueling demonstrations near Harvard.

The trial kicked off Oct. 15 at the federal courthouse in Boston with opening statements from each side’s lawyers. College administrators including Dean of Admissions and Financial Aid William R. Fitzsimmons ’67, Dean of the College Rakesh Khurana, and former University President Drew G. Faust defended the College’s scoring system for applicants, socioeconomic makeup, and special treatment for applicants with ties to donors.

Statistical experts hired by each side also clashed over whether admissions data indicated that the College discriminates against Asian-American applicants.

In late December, Harvard and SFFA summarized their proposed “findings of fact” and “conclusions of law” in legal filings. Rebuttals are due by Jan. 23, with additional amicus briefs from outside parties due Jan. 9. Burroughs will hear an additional set of arguments from both sides on Feb. 13, and is expected to render a decision in mid-2019.

Legal experts anticipate the losing side will appeal the verdict and predict that the case will eventually reach the Supreme Court. The outcome of the trial will likely shape the future of affirmative action at private colleges and universities nationwide.