News Analysis: How President Bacow Decides When to Speak Out — And When to Remain Silent 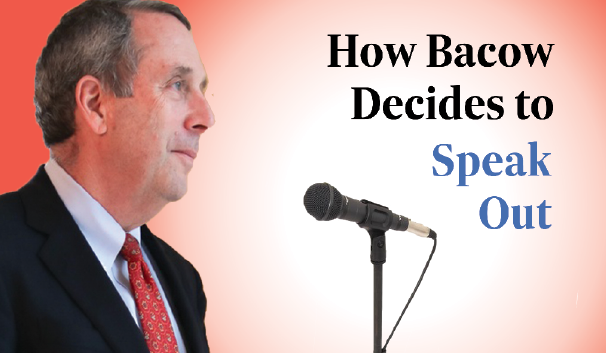 As political divisions in the United States deepen and create fissures across Harvard’s campus, University President Lawrence S. Bacow is following in his predecessor’s footsteps — taking a stand when he perceives Harvard’s interests to be under threat, and largely keeping quiet when issues turn political.

With nearly five months of his presidency under his belt, Bacow has already faced a number of high-profile challenges: a high-stakes lawsuit fighting the College’s race-conscious admissions policies, federal legislation hostile to higher education, and a contentious Supreme Court nominee with Harvard ties.

National politics and University issues are increasingly intertwined, and Bacow has spent the first months of his presidency defining his approach to a role that requires he remain nonpartisan.

“The challenge arises when we have contentious issues and people want us — either the University or a school or a dean or a president — to take a stand and the problem is where reasonable people can differ on certain issues, I believe it's the function of a university to encourage debate,” Bacow said in an October interview. “If we take a position, we're not encouraging debate, we are ending it.”

Controversy engulfed Kavanaugh’s confirmation process when several women came forward with allegations that a young Kavanaugh had sexually assaulted them decades earlier. The allegations sparked protests at Harvard Law School, where Kavanaugh had taught for a decade. He was scheduled to teach a course on the Supreme Court again starting in the winter, and protesters called on Law School Dean John F. Manning ’82 to bar Kavanaugh from returning to campus pending a full investigation into the assault allegations.

Manning refused to take a stand on the future of Kavanaugh’s teaching post, prompting further outcry from students. Kavanaugh ultimately decided on his own to step down from his position, Bacow told faculty assembled at an October faculty meeting.

“My understanding is that Kavanaugh decided not to teach this next January and that decision is year-to-year,” Bacow said. “I don’t know more of how that decision was made.”

Throughout the turmoil, Bacow remained silent, letting the Law School respond on its own to student demands that focused national media attention on Cambridge.

Bacow said in an interview last month that he is counseling deans and other top administrators across the University on how to take official stances while still fostering productive dialogue — particularly when students call on administrators to speak out on contentious issues.

“We have had conversations and we continue to have conversations about how do we encourage and maintain civil dialogue and civil discourse in the University,” Bacow said. “There are a whole set of issues where people would love for us to take a stand.”

The Academic Council — comprised of deans, vice presidents, and members of the Provost’s office — has served as a forum for these discussions. Bacow rebranded the group of Harvard administrators, which was formerly known as the “Council of Deans.”

Bacow said he did not specifically discuss the Kavanaugh controversy with the Academic Council, instead offering suggestions for when it was appropriate for administrators to take a public stance.

Bacow’s reticence to weigh in on politicized issues comes at a time when conservatives have accused universities of being bastions of liberalism — a narrative Bacow has thus far sought to counter. He devoted a significant portion of his 35-minute inaugural address in October to discussing the University’s interest in fostering dialogue among those with opposing viewpoints.

“We should not be afraid to welcome into our communities those who challenge our thinking,” Bacow said in his speech.

When issues have direct bearing on the University’s mission, though, Bacow is more willing to pick sides.

His leadership philosophy “doesn't mean that we never express opinions,” he said. “Obviously we do, but typically we do on those issues — the lawsuit is a good example — that are central to the institution, or the institution has had a long-standing point of view and where we should not be bashful about defending it.”

He has spoken out about the University’s position on the admissions lawsuit, penning emails to students and alumni supporting Harvard’s affirmative action policy and unequivocally denying that the school discriminates in its admissions process.

In an October email to Harvard affiliates, Bacow acknowledged that “reasonable people may have different views” — but he made his own abundantly clear. He has repeatedly maintained that he is confident Harvard will win in court.

In line with his goal of balancing perspectives, though, Bacow said even when administrators choose to advance a particular argument, they should remain cognizant that some may disagree.

“Even when we have such positions, we need to recognize that not everybody is going to agree with us and be respectful about those who have other points of view,” he said.