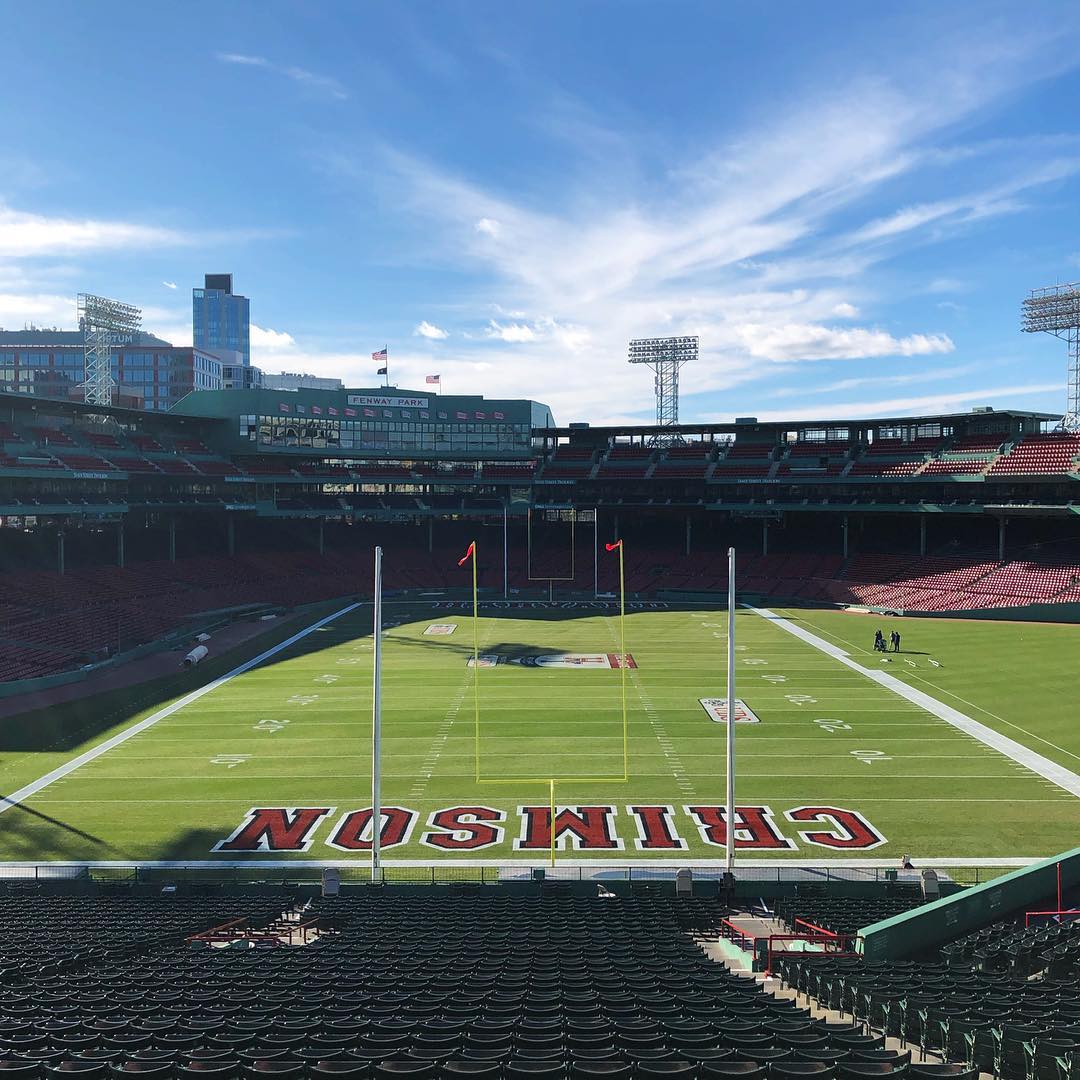 The field for this year's iteration of the Harvard-Yale football game at Fenway Park. By Courtesy of David Mellor and Staff
By Brie K. Buchanan and Juliet E. Isselbacher, Contributing Writers

Students got into the competitive spirit at Harvard-Yale Spirit Week, a series of events meant to generate pre-match excitement ahead of this year's iteration of the Harvard-Yale football game Saturday.

Spirit Week, an annual tradition hosted by the College Events Board, kicked off with a Chili Cook-Off in the Science Center Plaza and will close out with the dance party, “HYsteria,” open to all Harvard and Yale undergraduates Friday night.

The Crimson Traditions Committee of the CEB is in charge of organizing Spirit Week events in order to rally school spirit in preparation for The Game, according to Joseph H. Zuckerman ’19, a member of the committee.

“We really tried to have a diverse range of events this week to just kind of get the whole student body involved,” Zuckerman said.

One such event, the “Bulldog Roast,” took place in the Smith Campus Center on Thursday night. It featured performances from on-campus comedy groups Stand Up Comics Society and On Harvard Time..

Andrew J. Berry, a lecturer in the Organismic and Evolutionary Biology Department, gave a lecture entitled, “Why Harvard is Better Than Yale.”

In his lecture, Berry called Yale’s mascot, a bulldog, “an anatomical disaster” with “physical deformities.”

“Sorry folks, that’s where you’re going to be,” he said. “That’s if you make it out" of the Science Center tailgate, he added.

Last fall, Fenway Sports Management announced that The Game would take place at the Red Sox’s home field in 2018. This will mark the first time since 1912 that the match has been played at a location other than the Harvard Stadium or the Yale Bowl.

Some students have voiced their disappointment with the move and have drawn rebukes from College Deans for attempting to sell their tickets.

According to Zuckerman, The Game’s move to Fenway Park influenced CEB’s approach to planning this year’s Spirit Week.

“I think we definitely wanted to give the students something special this week because people are a little bit upset about Fenway,” Zuckerman said. “So it’s definitely gone into the thought process of trying to get peoples’ spirit back up and give them something fun going on the week before The Game.”

Other comedy groups at the “Bulldog Roast” also poked fun at the move to Fenway.

On Harvard Time presented a video in which Yale students mistakenly assume that they will be playing Harvard in baseball.

“So you’re telling me we learned an entire new game for nothing?” one “Yalie” asks in the video.

Despite the jokes, some students said they were excited to attend The Game at Fenway.

“I think last year being that it was at Yale, it was a lot more difficult to go first thing in the morning,” she said. “I’m actually excited for it to be at Fenway and in Boston this year.”

Apurva Kanneganti ’20 said she hoped Harvard would gain the edge over Yale in the Ivy League Football Conference.

“The fact that we’re actually tied in the conference with Yale right now gives me some hope for Saturday,” she said.