Dean of SEAS Francis J. Doyle III called the survey results, which indicated that more than a quarter of respondents have experienced harassment or discrimination, “eye-opening.”
By Luke W. Xu 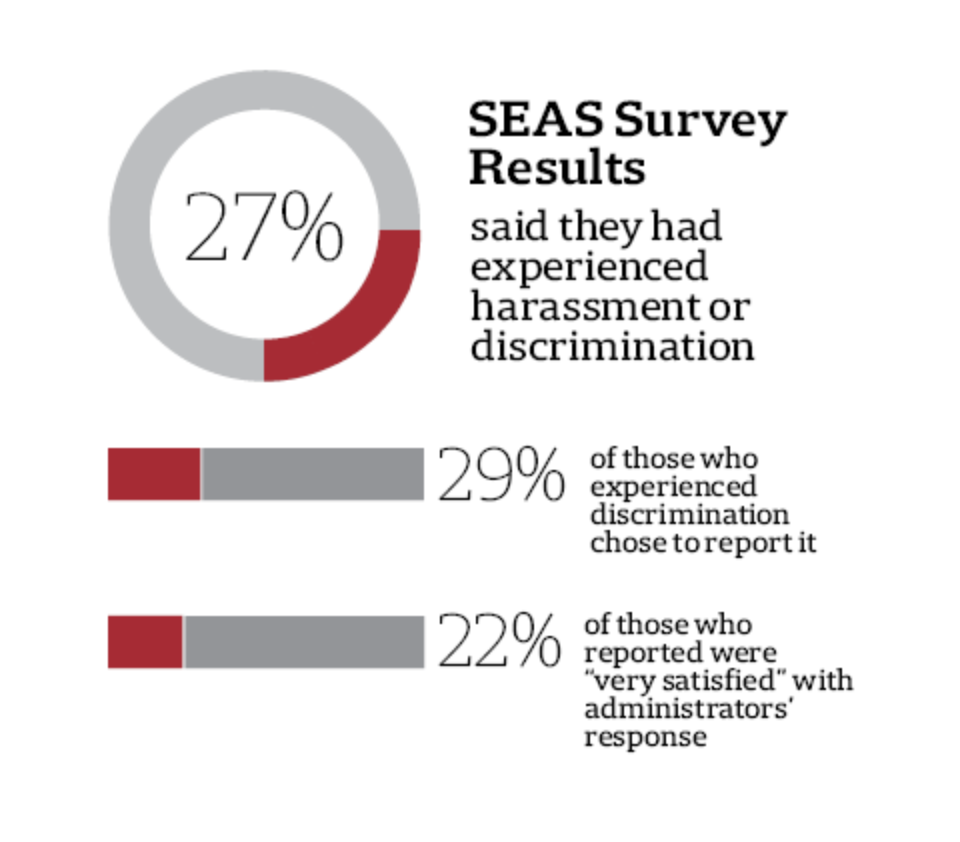 The School of Engineering and Applied Sciences released the results of its first ever comprehensive climate survey last week, reporting “a breakdown in confidence” in the school’s ability “to meaningfully address negative behaviors and actions in the workplace, lab, and classroom.”

“A majority of us believe that, as individuals, we try hard to create a welcoming and respectful environment at SEAS,” he wrote. “Yet, as a community, the data clearly suggest that we do not consistently realize that goal.”

The survey, developed by a committee of students, staff, and faculty, launched last May. It polled SEAS affiliates on topics such as overall climate, career growth, and experience of bias and harassment. Of the over 2,100 members of SEAS, 436 members responded, representing a 21 percent completion rate.

Prominently featured in the report are statistics for incidents of harassment or discrimination. Twenty-seven percent of survey respondents indicated that they’ve experienced harassment or discrimination at SEAS. Of that group, 29 percent indicated that they reported their incident. And of those who reported their incidents, only 22 percent were satisfied with how the reports were handled.

“The bottom line is all of us have a lot of work to do to make SEAS the community that we aspire to be,” Doyle wrote. “Harassment and discrimination are real; they occur at SEAS and they have a profoundly negative impact on our community.”

According to the report, women, individuals with disabilities, members of the “LGBQA+” community, and underrepresented minority groups were all more likely to report incidents of harassment or discrimination.

The survey — which Doyle called “one of the most detailed surveys of its kind” in a letter introducing the data — followed the recommendations of the SEAS Committee on Diversity, Inclusion, and Belonging, which the school convened last September.

In his letter, Doyle highlighted a number of other takeaways from the survey, such as reported challenges in maintaining work-life balance, a perceived lack of commitment to diversity and inclusivity on the part of SEAS, and reports of insufficient access to mental health services.

Alexis J. Stokes, SEAS’s Director of Diversity, Inclusion, and Belonging, said in an interview last week that SEAS is committed to responding to the concerns raised in the survey.

“We want to make it clear that, whether the response rate was 21 percent or 100 percent, there were concerns that were mentioned in the survey, and we want to respond to them,” she said.

In the report, Doyle committed to a number of “short- and medium- term” steps SEAS will take, including new reporting mechanisms for incidents of bias, harassment or discrimination, improved accessibility accommodations, and a new requirement for faculty applications to SEAS.

Stokes said SEAS will host a number of discussions over the fall semester with staff, faculty, and students to discuss the survey results. The discussions will be moderated by Judy “JJ” Jackson, a diversity and inclusion administrator at MIT.

“It's an opportunity for our community to ask questions about the results of the survey, as well as the process of the survey,” Stokes said. “They can give feedback, as well as suggestions, of things that they would like to see SEAS do in response.”

Stokes said SEAS is committed to maintaining “transparency” in its diversity efforts.

“We want to make sure that, as we discuss the results and formulate a plan to move forward, that again all voices are a part of the process,” she said.

Improving diversity and inclusion has been an “extremely passionate” priority for Doyle. Since his deanship began in 2015, SEAS has launched multiple diversity initiatives, including infrastructure for several student affinity groups.

In the survey, students often cited their experience with diverse affinity groups as highlights of their SEAS experience, according to Stokes.

In his email, Doyle reaffirmed his commitment to improving the SEAS climate.

“Our offices, labs, and classrooms should be places where we can all do our best work, in an environment that encourages tolerance, collegiality, and respect,” he wrote. “And we must assertively act when members of our community fail to live up to those ideals.”