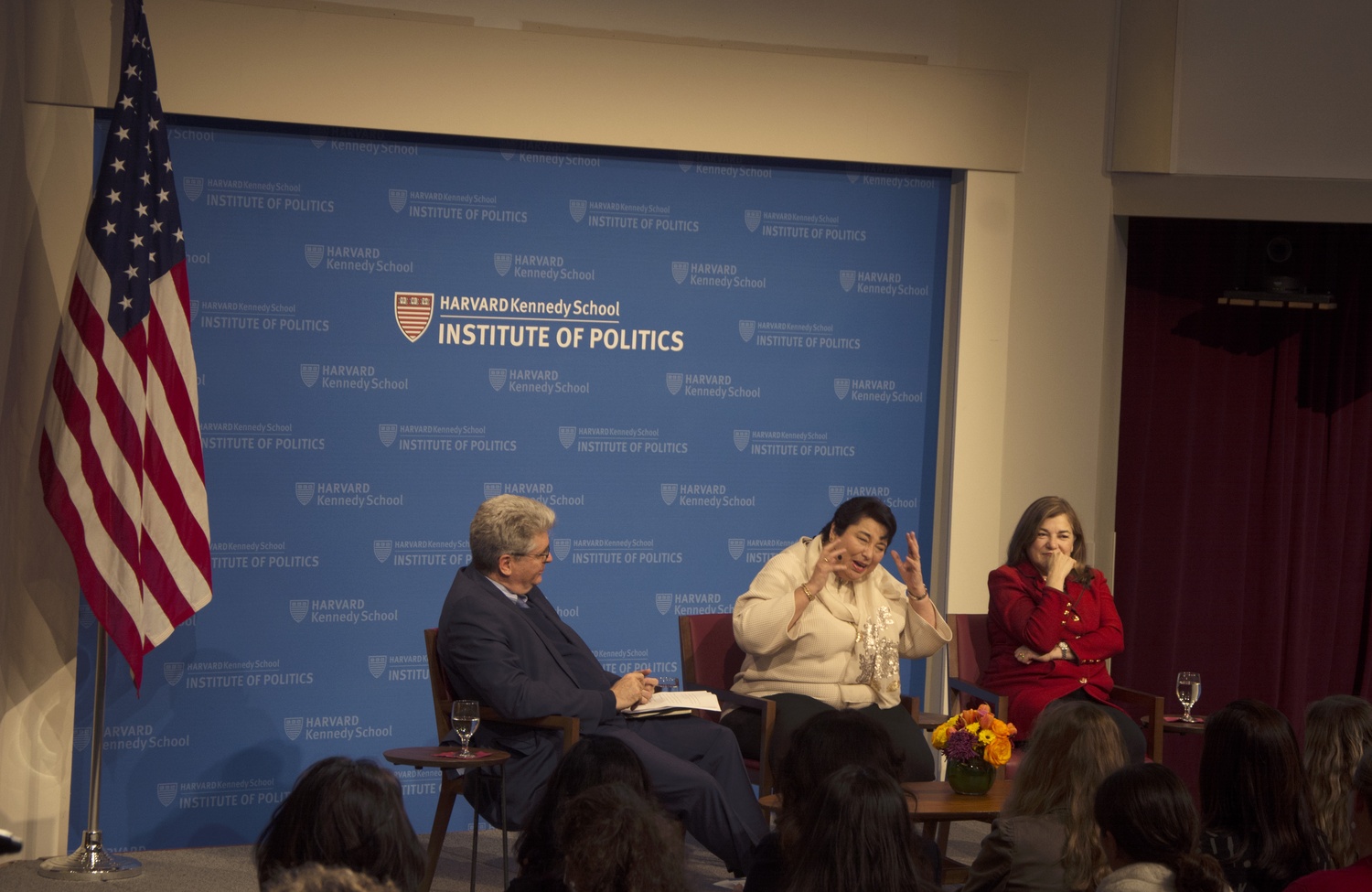 Xenophobia and populism make it hard for leaders to push for better immigration policies in the Americas, Former Prime Minister of Peru Beatriz Merino and former California Representative Loretta L. Sanchez told an audience at the Institute of Politics Tuesday night. Both women, however, urged aspiring leaders not to let that stop them from trying.

Addressing immigration and the role it plays in the politics of their countries, Merino and Sanchez compared their experiences in leadership as a Peruvian former head of state and an American former legislator of Mexican heritage, respectively.

“You can tell [populists] all day long that immigrants give more to the United States in taxes than they take in services. The wavelength of ‘here are all the reasons why immigrants are good’ don’t work,” Sanchez said. “It’s an emotional issue, and populism is based on emotion.”

The event, called “Immigration Through the Lens of Latina Leaders,” attracted around 60 attendees. Topics included the recent increase in Venezuelan immigrants to Peru and the extra tenacity it requires for women to rise in the ranks of political leadership.

“At the end of the day, it is always about values and integrity,” Merino, who was the first woman to be a prime minister in Latin America, said.

Immigration has been a hot political topic for several years — especially since the 2016 U.S. presidential election —and Harvard’s campus has been no exception.

In his opening remarks, Fernando M. Reimers, an Education School professor who moderated the event, referenced University President Lawrence S. Bacow’s speech at his inauguration two weeks ago. Bacow spoke about his refugee parents and his conviction that immigrants are indispensable to Harvard and American society.

Merino on Tuesday painted a less sunny picture. She said she was having apprehensions about the state of democracy amid the growing nationalist rhetoric in Peru.

“One would have thought that democracy was a safe ship, where we were all going to sail for the rest of our lives,” Merino said. “And then, suddenly, populism came along.”

“Then, of course, populism based itself in nationalism,” she added. “But then it’s only a step to racism.”

Sanchez, whose parents immigrated from Mexico, spoke of her personal experience with racism during her time working in government. Following her election to Congress in 1996, then-Speaker of the House Newt Gingrich initiated an investigation believing, Sanchez said, that she “drove a bus from Mexico with illegals” to vote for her.

Sanchez also stressed the importance of knowing the “unwritten rules” of politics, especially for marginalized groups like women or Latinx people.

Recounting her family’s immigration story, Sanchez advised the audience to approach contentious debates on immigration with the power of the personal story, which she said carries far more weight than studies or statistics.

The forum was the result of a collaboration between the IOP and Conexión, an organization that aims to provide Latinx Americans with mentorship and professional support.

“It’s Hispanic Heritage Month, I think it’s important to demonstrate that we pay attention to these things, that we know that it matters,” Phyllis Barajas, Founder and CEO of Conexíon said. “And as we stated, these are our neighbors to the south, and they’re very important. They’re intertwined economically, socially, militarily, in all phases they’re intertwined with us.”